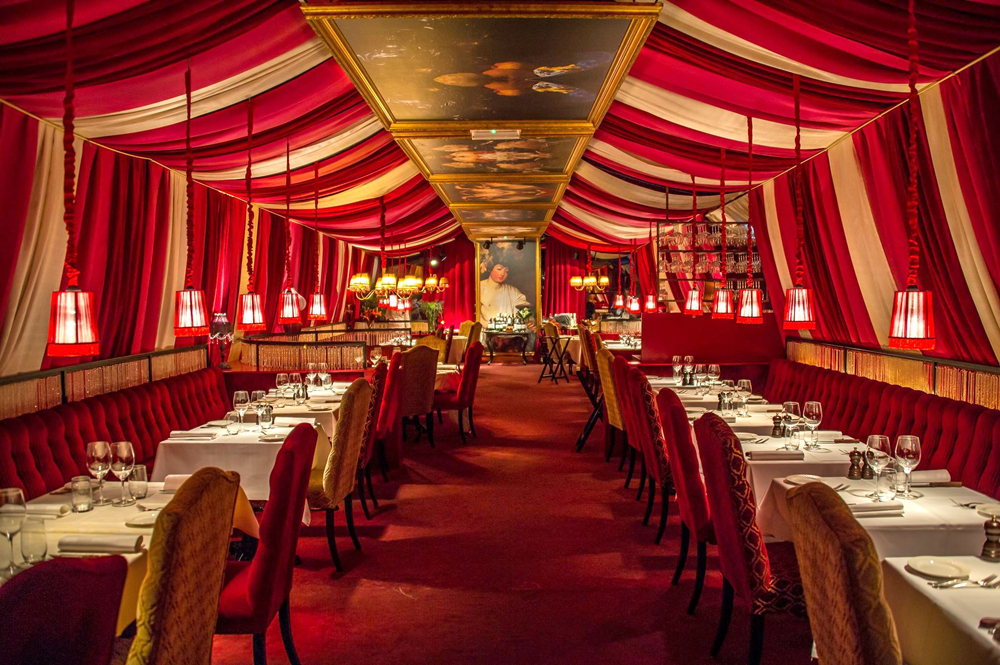 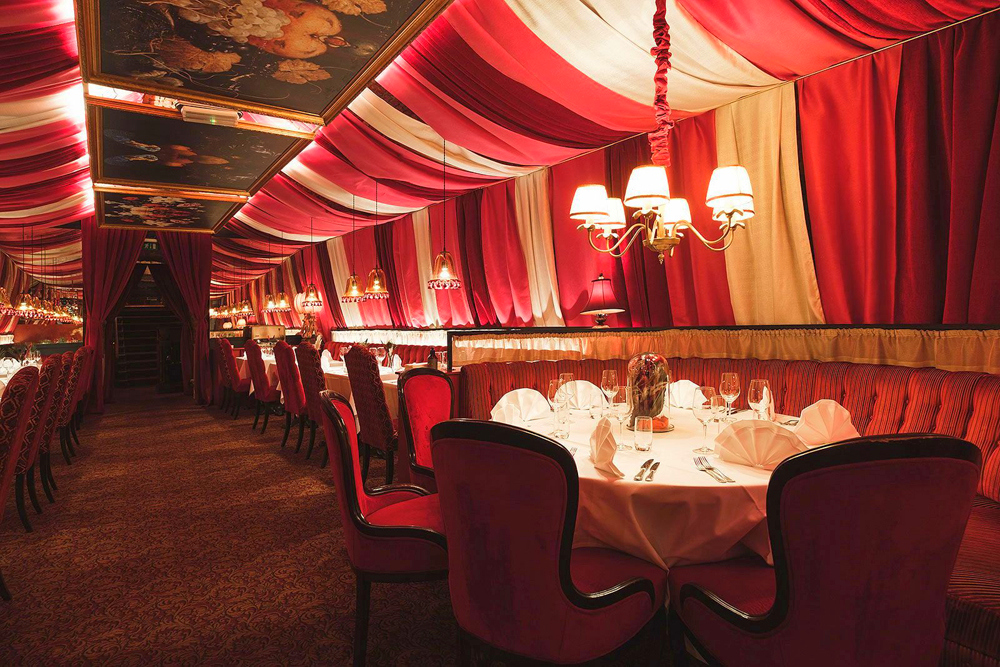 It’s a LOunge for intrigue, scandalous assignations, and whispered secrets, darlings! Find yourself a corner that’s both shadowy enough for a good backstabbing but with lighting flattering enough that everyone can’t stop sneaking glances at you. Toss your head back and laugh to the ceiling as if everyone’s watching you. Wear a turban and sport a cigarette holder. Take out a compact theatrically and then use it to scan the room as you check your makeup. Declare someone your mortal enemy. The best part about all of this exhausting behavior? You only need to do it in your head. Enjoy your roleplay, kittens! We’re off to herd celebrities. They’re so rambunctious this time of year!

How Jingle Dresses Are Being Used to Heal Communities
As the COVID-19 pandemic began raging across the globe in spring 2020, Navajo photographer Eugene Tapahe had a dream. He was sitting on the grass at Yellowstone National Park (which extends across Wyoming, Montana, and Idaho) and watching bison graze under the setting sun. Suddenly, jingle dress dancers appeared and started performing the traditional Ojibwe healing dance, with the bison slowly joining in. “All of a sudden, I felt like I was at peace,” Tapahe says. “At the time, everything felt hopeless and dismal, and we didn’t really know what was going to happen. But in the dream, I felt a sense of hope and healing.” When he awoke, he wanted to bring that feeling to reality—and to share that feeling of peace with other Indigenous communities suffering too.

The History of Parkway Gardens, a Bucolic Haven for Middle-Class Black Families
After WWII, the sleepy hamlet became that rarest of places—but after generations of block parties and bridge tournaments, will its rich heritage be forgotten?
A fleet of limousines pulled into the cul-de-sac in front of photographer Gordon Parks’s bungalow at 15 Adams Place in the suburban enclave of Parkway Gardens, in Greenburgh, New York. Groups of African-Americans, dressed in their summer finery, emerged from the late model limos. It “looked like a car salesman’s paradise,” socialite Betty Granger wrote in her Amsterdam News column, “Conversation Piece.” It was September 12, 1954, and Parks, who was finding acclaim as a photo­journalist and a top-paid Vogue fashion photographer, had invited nearly 50 friends for a party around his new in-ground pool.

Playing Princess Diana Was Kristen Stewart’s Fairy Tale
The actor tells V.F. about her most ambitious role yet—playing the late royal in Pablo Larraín’s Spencer—and her unexpected reaction to the finished film.
“Everyone loves to talk about how I prepared for this role and what type of research or magic backflip I did to get the accent right,” says Stewart, who worked closely with William Conacher, the same dialect coach who assisted Emma Corrin in becoming Diana for The Crown. “But honestly, if you have enough time to get an accent right, it’s very technical. What really matters is going through stuff and embedding truly emotional reactions to things that do exist in real life, if you’re doing a story about a person that actually lived.”

36 Next-Level Vegetable Side Dishes to Serve at Thanksgiving
Turkey might be the traditional centerpiece of the Thanksgiving table, but side dishes are just as important. In this roundup, we’ve included some of our all-time favorite recipes for vegetable sides, from easy brussels sprouts to creamed kale and brown butter mashed potatoes. With over 30 dishes to choose from, you’ll definitely find a few that all your guests will love.

I spent $1,000 to have a room to myself on a 30-hour Amtrak ride, and it’s the only way I’d ever travel long distance by train again
I’ve flown a few times during the pandemic and found wearing a mask the entire time and sitting uncomfortably close to other passengers less than desirable. I thought I’d give another mode of transportation a try this time and figured having a room on a train where I could close my door and be alone would be more comfortable.
Even though the train tickets were more expensive than an economy flight to Miami (a flight from NYC to Miami in basic economy could cost about $50, depending on the day), and the journey took 10 times as long, I was eager to see whether it would be worth the extra time and money spent.

Sam Adams Is Launching a New Beer Made With Hops That Traveled to Space
It’s out of this world.
Samuel Adams is giving us all an out-of-this-world beer. And they mean that literally.
In late October, the craft beer company out of Boston announced that it’s launching Space Craft, a beer brewed from 66 pounds of hops that traveled more than 300 miles above Earth on the first-ever all-civilian space mission in September.

The Royal Family Has a ‘Resident Clock Master’ Who Has to Turn 1,500 Clocks Back During Daylight Savings
It takes an entire team a whole weekend.
Think having to turn your oven’s clock back over daylight savings is a pain? Try having to maintain the Queen’s 1,500 timepieces back over a single weekend.
In the wee hours of Sunday morning, the United Kingdom turned its clocks back one hour, a week before the United States does the same. In an effort to remind people to change the clocks in their house, the British royal family took to social media to show how they, or rather a team of experts, turn back the hundreds of clocks inside Windsor Castle.

Thanksgiving Dinner in Ice Cream Form Is Back Again from Salt & Straw
This year’s lineup once again features all new wild Thanksgiving creations.
Like many modern ice cream companies, Portland, Oregon-based Salt & Straw prides itself on offering many unique – and sometimes bizarre – flavors. They’ve run the gamut from sheep’s milk cheese ice cream (interesting!) to smoked ham soft-serve (what the hell?!) But November is the brand’s time to shine: For the ninth straight year, they’re offering their full Thanksgiving meal in ice cream form – and once again, for 2021, the pints can be shipped across the U.S.A. in time for turkey day.

The Big Question This Thanksgiving: Are You Vaccinated?
As many Americans plan larger celebrations this year, the inoculation status of dinner guests is becoming a topic of conversation, concern and conflict.
In interviews, many people — both vaccinated and unvaccinated — said they were planning to tiptoe around the subject, in some cases avoiding a meal with those they might disagree with. Others, who are immunocompromised or have children too young to be vaccinated, are grappling with how to decline invitations from unvaccinated relatives. And some hosts, worried about safety, are drawing a line.

Kristen Stewart’s Princess Diana Wig Cost $6,000 — and Took 6 Weeks to Make
Spencer’s hair and makeup designer shares a behind-the-scenes look at the star’s transformation into the beloved royal.
Considering Princess Diana was once the most photographed woman in the world, hair and makeup designer Wakana Yoshihara had plenty of reference material to work with when transforming Kristen Stewart into the beloved royal for Spencer.
“It was quite easy because there are so many available images of her,” Yoshihara tells InStyle. “When you Google search ‘Princess Diana in 1991’, hundreds of images come through.”
Each wig, Yoshihara says, cost close to $6,000, and she went for quality over quantity, creating one wig for the royal’s coiffed bob and another for a straighter, softer style worn in scenes with Prince William and Prince Harry.

Lady Gaga “Had Some Psychological Difficulty” Filming House of Gucci
This sounds very intense.
Gaga went on to say that prep for the movie took over a year and a half and filming went on ever longer, so she was in character for nearly three years, speaking with that accent, using those mannerisms, and doing her best not to break character, even when the cameras weren’t on her. It got so heavy, she noted, that she changes, like her hair color, influenced how she could and couldn’t act.

Julia Child’s Former Washington, D.C. Home Hits the Market for $3.5 Million
The 1870 Colonial-style home, which the chef affectionately called her “little jewel,” is where she worked on one of her iconic cookbooks.
For celebrity chef, television personality, and cultural icon Julia Child, her first home—located in Washington, D.C.’s Georgetown neighborhood—was where she produced recipes for one of her earliest cookbooks, Mastering the Art of French Cooking. She called the yellow clapboard house her “little jewel,” and lived there with her husband Paul from 1948 to 1961. And now, it could be yours. After six years of extensive renovations, the home has hit the market for $3.5 million. Leading the charge of the restoration is current owner Rory Veevers-Carter, a software entrepreneur and master home flipper, who has documented the “story of the renovation” on his Instagram page, Little Jewel on Olive.

The Crown Jewels: From Empress Farah of Iran to Queen Mary, the royals who have boasted the best jewellery collections
From storied tiaras to epic caches of diamonds
Born of aristocratic roots but not wealthy ones, Mary amassed a legendary jewellery collection throughout her reign. She had married the future King George V in 1893, only after her first fiancé, his brother, died unexpectedly before their wedding day. The jewellery she received as wedding gifts could have filled a Bond Street salon but Mary was well ahead of her time, so she repurposed many of the stones into more contemporary designs and kept a meticulous inventory of their provenance. One of her more impressive pieces was the the Delhi Durbar Necklace, featuring nine of the Cambridge emeralds, which had astonishingly been won by Mary’s grandmother in a charity lottery. The emeralds were passed down the family by way of children and mistresses until Mary commissioned Garrard to set them alongside diamonds to make up the necklace and added the near flawless 8.8 carat Cullinan VII diamond as a pendant. This diamond is one of nine cut from the 3,100-carat Cullinan diamond which had been gifted to Mary’s father-in-law, King Edward VII. The Lovers Knot Brooch is another recognisable jewellery icon. Bought from Garrard in 1932, this scalloped shaped ribbon brooch features brilliant cut diamonds and is designed with hinges at the top of the tails allowing them to flicker with movement. Mary died in 1953 during the reign of Queen Elizabeth II, who inherited much of her enviable jewellery collection and was seen wearing the Queen Mary’s Lovers Knot Brooch at the wedding of the Duke and Duchess of Cambridge in 2011.