This is a bit of a surprise, we have to say. Meghan Markle made a surprise appearance on Ellen and the interview will air tomorrow. We weren’t sure how much the Sussexes planned on doing mainstream television appearances when they moved to America. We think we must have assumed that they’d be taking a more Beyoncé sort of approach: full control, tightly regulated, and rare. But Harry already dipped his toe in the waters when he rode around with James Corden. Oprah interviews have a sense of rarity to them, like an audience with a queen, ironically. But Ellen is as middle-of-the-road mainstream as a talk show gets and it’s interesting to consider what this appearance means for the Sussexes’ plans. We have no doubt that the interview will be picked apart and parsed down to every syllable after it does air, so we’d rather get to the fashion stuff now, while everyone’s waiting to hear what she has to say. For once her love of non-colors paid off (as it did with her Oprah ensemble). The starkness really stands out on that eye-popping set (which always looked like a high-end airport lounge to us) and the really interesting design and shape of that top does all the work of providing visual interest and keeping your eye on her. In some ways, she’s got a better track record for television interview ensembles than she does for red carpets or formal appearances. That makes a good deal of sense given her previous job. Her hair and makeup look great but we kinda miss how she used to switch up the hairstyle a bit more back in her royal days. 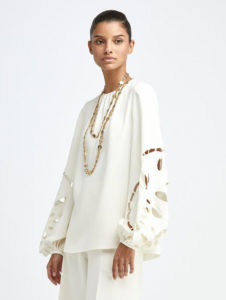 Previous post:
Elle Fanning and Nicholas Hoult at Hulu’s “The Great” Premiere Next Post:
Tom Holland is GQ’s Superhero of the Year