We’re afraid it’s gonna be another quick n’ dirty double recap, darlings! That sounds like a sexual position, but we just mean that, with three international versions of Drag Race running (our Italia recap is in the pipeline), there’s simply no way your manly hosts can keep up with the volume while still being fabulous red carpet commenters and world renowned podcasters to an international audience of millions. Yes, we’re laying it on as thick as fuck, but one of the primary rules of blogging is that you never, ever start off a post by apologizing for its lateness. That shit’s for emails.

Anyway, off we go. It’s a weird sensation bouncing from franchise to franchise. Because the Werk Room is nearly identical on every version of the show, sometimes we find the sudden switch from one accent or language to another to be jarring as hell. “Oh right, we’re in Canada now” is a thing we’ll find ourselves saying. 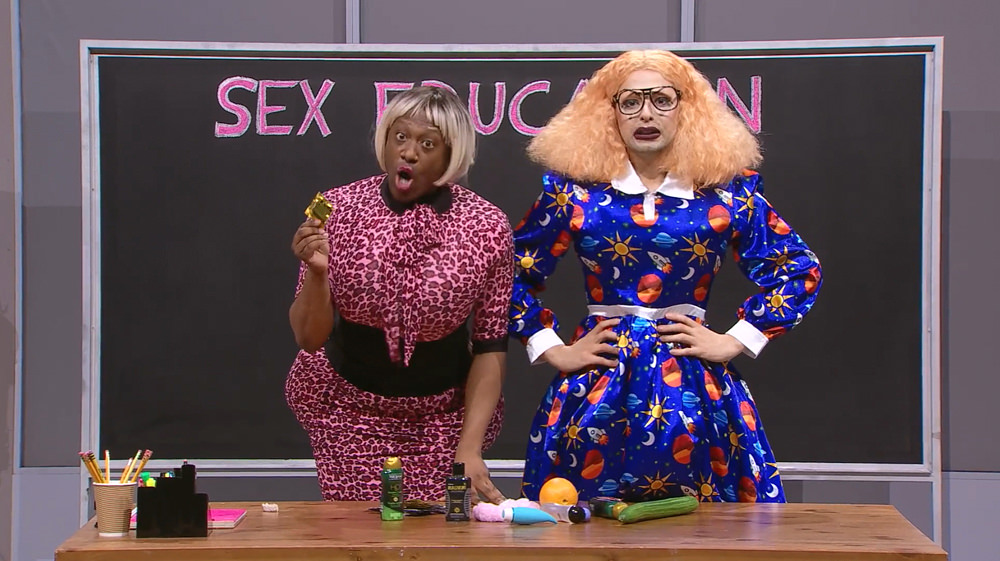 One thing Canada’s Drag Race has that seems to differentiate it from the pack is the somewhat complicated mini-challenges. They’re essentially main challenges without the time to prepare, going all-in on improv and performance. This is not a complaint. It’s fun when the show jumps right into something difficult and entertaining instead of spending a lot of time on talky scenes. 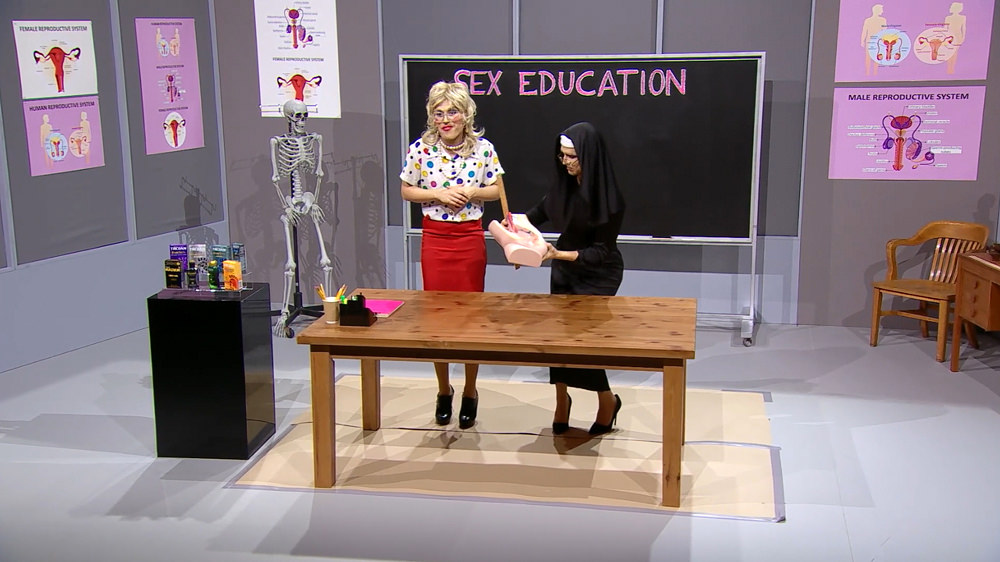 If there’s any downside to this approach, it’s that it doesn’t differentiate enough between the main challenge and the mini-challenge. Asking the queens to improv a sex education class using Trojan products is indistinguishable from any main improv challenge  – except that product placement that heavy is usually reserved for the minis. Anyway, Gia and Synthia won this one, which means they got to pick their teams for the main challenge (and also a shit-ton of Trojan products). It’s a country girl group number called “Bye Flop” and it’s absolutely terrible. The Giddy Girls, Gia’s team of Adriana, Icesis and Pythia, went first. We’re not going to bother assessing each group because the editing makes sure that you don’t get much of a sense of how the number is unfolding. The Do-Si-Hos, Synthia’s team of Kimora, Kendall and Eve were vaguely more entertaining to us, possibly because we liked their costumes more. Each team was left to their own devices when it came to choreography and because none of them are dancers (there’s a distinct sense that all these girls lack performance-heavy résumés), both routines were relatively dreary and low-energy. 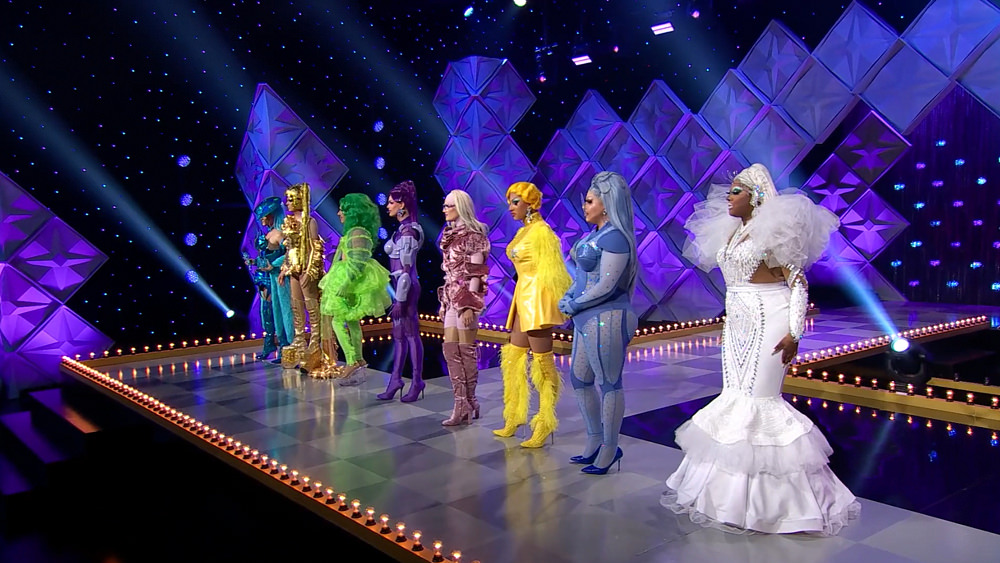 The runway category was Monochromatica, but we don’t think they ever mentioned Gaga by name. Instead, they defaulted to a “futuristic pop star in one color” explanation. The girls delivered fairly high polish, but we thought there was a distinct lack of imagination overall. Adriana’s is great, but we don’t love the hat. Icesis looks spectacular and we’d call it our favorite look of the week by a hair. Pythia took a rish and she gets points for not looking like everyone else up there, but it’s a pretty goofy costume. Maybe this is a minor point, but it bugs that her wig slightly clashes with her outfit. Gia looks great, although it feels a little unoriginal. We have no idea why Synthia would choose such a mauvey shade of pink when a brief like this one practically screams for neon or bubblegum pink. This looks like ’80s upholstery. Michelle would’ve had a fit over those bicycle shorts. Kendall’s is cute but not very fresh and she continues to have an issue with flat wigs over her large features. She needs to proportionize above the neck. Believe it or not, Eve’s was our second-favorite of the week. She has probably the highest level of polish among these queens, but her performance skills are lacking and her personality is not friendly to the competition. Kimora’s looks like a repurposed drag bride costume and the judges were right to call out the view from the back. Gia won and we don’t really have an argument for or against that choice. This seemed like a fair matchup and while Eve really tried, Synthia set the stage on fire. She’s probably the highest level performer in the group, so that makes sense. She just needs to up her looks game. She said it herself, in a moment of such pure self-knowledge that it confirmed our idea that she’s probably much better than reality TV will allow her to be: “Polished presentation, messy personality.” To that we’d add: Needs a little more stage experience. Onward, to the ball. We have to admit that Canada’s Drag Race tends to fall behind in the recapping because it’s probably our least favorite version of the show, partially because it has the most boring judges and hosts. Brad Goreski is perhaps unsurprisingly really well-suited to this environment and brings his years of E! commentary to the judging table, but Brooke Lynn and Amanda Brugel are utter snoozes to us. Sorry to their fans. Another over-the-top, extended, more complicated than the norm mini-challenges, with the queens being asked to do quick drag, paint their inner saboteur, and then deliver an off-the-cuff performance unveiling their artwork. Icesis took it for being the most over the top, which is largely how these things tend to be judged. Her quick drag was pretty great too; smartly put together so she didn’t even need to do much with her face. Then it was on to the main challenge and we have to say, Canada’s Drag Race is doing a pretty decent job of coming up with fun or cute challenges. This week’s Sinner’s Ball required three looks, the third of which was assigned from one of the seven deadly sins and had to be made from the materials in the accompanying box. Very stagey and easy to understand, exactly how a challenge should be. We’ve got a lot of looks to run through, so we’ll be snappy about it. But first, a quick stop to have one of the more interesting of the makeup mirror conversations, regarding the use of pronouns and how certain cultures (not to mention queens over a certain age) find it difficult to keep track of them. It’s good to see this kind of honesty and open dialogue and it’s illuminating to show that even drag queens need to work these things out correctly.

On to the runway. The categories: Sex, Drugs and Rock & Roll, Ugly as Sin, and the Seven Deadly Sins. Pythia had a pretty great week, but we think the judges had it right to basically place her in third behind Icesis and Gia. Her SD&RR look was a little too basic and while her Ugly as Sin look nailed the brief and was certainly one of the ugliest, she was outdone on the this take. Her Gluttony costume was amazingly well put together, though. Kendall Gender’s SD&RR look was spectacular. Loved the wig.  Her Ugly As Sin look didn’t quite hit the brief. It was more like Tacky, With a Weird Horror Show Thing Happening. And finally, her Pride look was as generic as it gets. A pussy needs to be stepped up. 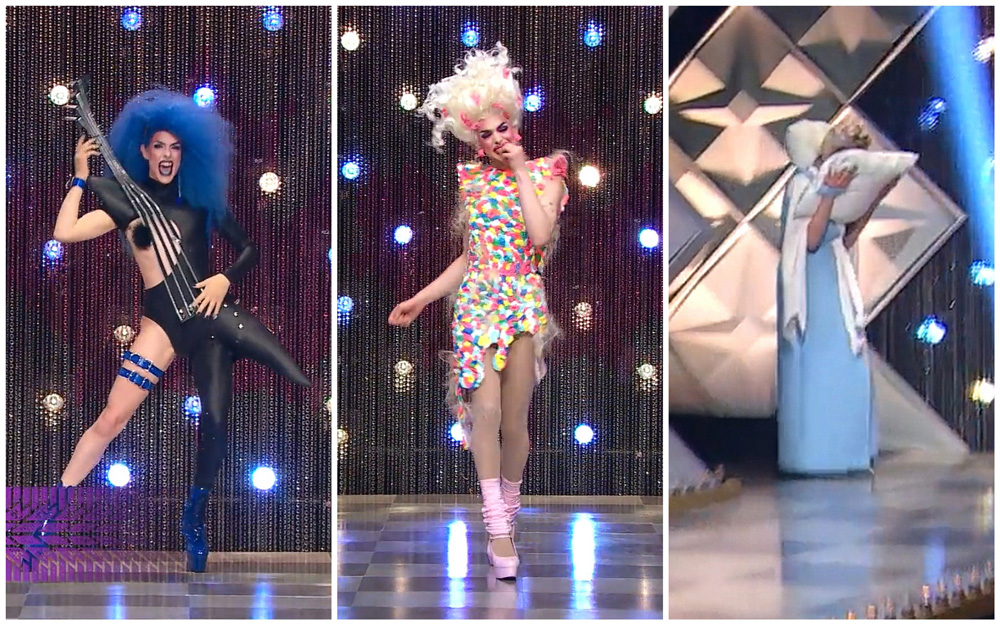 Gia’s definitely establishing herself as one to watch. The SD&RR look was a clever idea, but it didn’t quite work. The gum pole idea was fantastic and the Sloth look was really well executed. Adriana’s SD&RR look was fine, but a little generic, her Ugly As Sin look was almost disturbingly weird, and her Lust look was perhaps not the most imaginative or flattering take, but it was on point, at least. 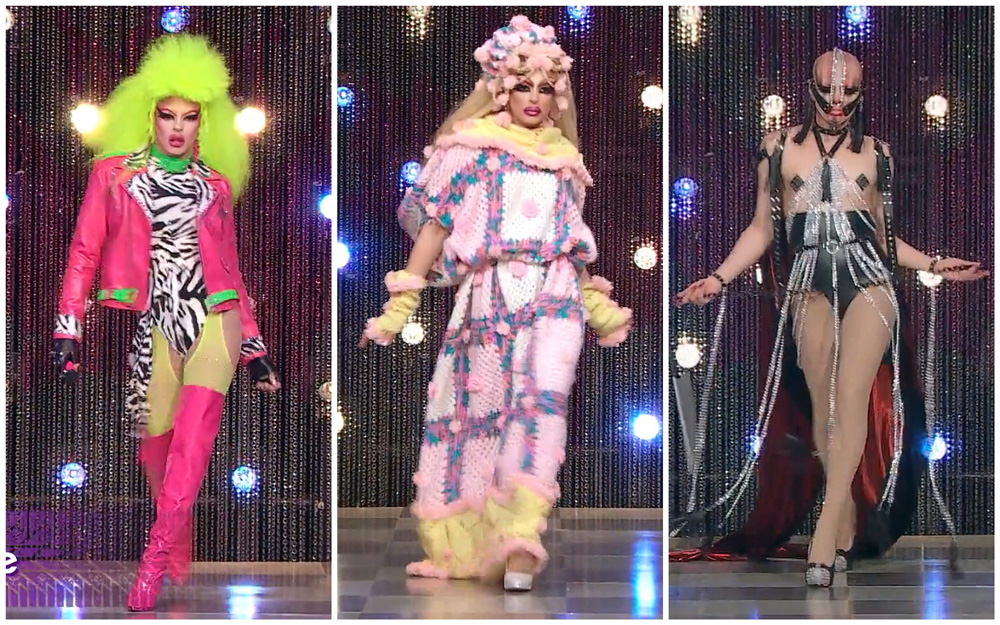 Icesis absolutely nailed all three looks, without question. Her SD&RR look was one of the few that actually looked distinct, her crochet look was much more cohesive than Pythia’s (and she really sold it with “I smell like piss”), and her Wrath look was bold and risky. She handily took the win this week and she’s clearly moving to frontrunner status. 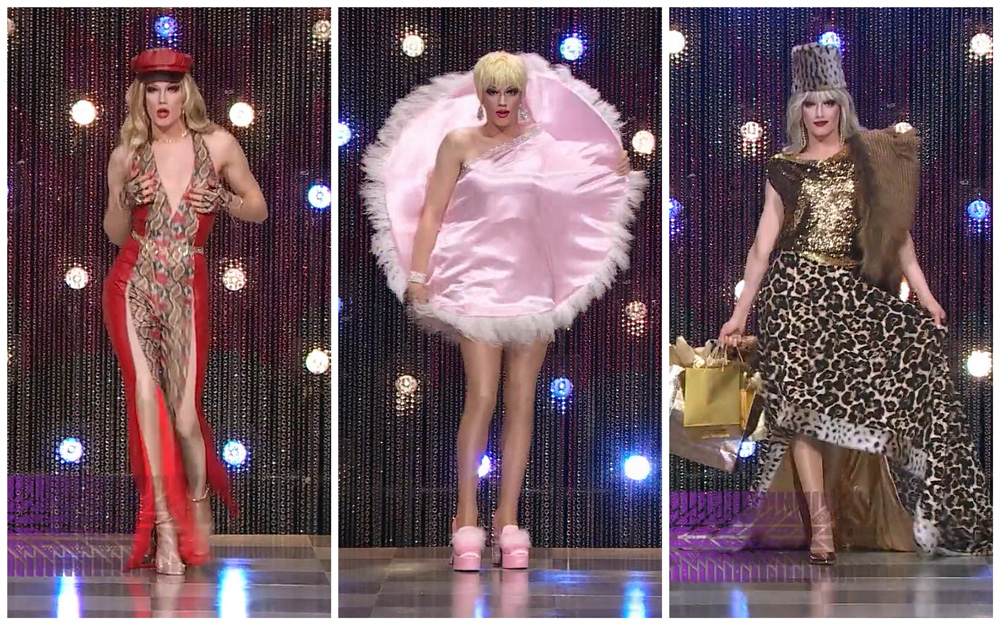 Synthia’s drag is extremely generic and we’re starting to think she’s a singer who does drag rather than a drag queen who sings. The Britney drag makes no sense for a Sex, Drugs and Rock & Roll look, since she really only embodies one of those qualities. We have absolutely no idea how the second look is supposed to be Ugly as Sin and her handmade Greed look just came off like a pile of fabrics pinned together and wrapped around her. Kimora had a really great week for herself. She didn’t wind up in the top, but she got the judges attention and that’s what she wanted. The Tina drag was fun and well done, although she’s another choice that doesn’t quite fit the “drugs” part of the brief. The Ugly as Sin choice was, of course, inspired. She committed to it and it left the judges stunned, as it was supposed to. For all her complaining, her Envy look wasn’t all that bad. We can’t tell if it was inspired or a bit obvious to just take the “ENVY” label off the luggage and turn it into a hat. Kendall and Synthia seem like the right choices to slug it out at this point, since the deficits keep piling up week after week and their efforts this week were on the sad side. Kendall gave a wildly energetic, balls-out performance and Synthia gave a more polished one. This could have gone either way. But the judges opted to let her go and even though we think Synthia had real talent on a level few of the other girls do, we can’t deny that she just hasn’t managed to break out and really dazzle. At this point, that’s a dealbreaker.

Next up, those hand-talking queens of Drag Race Italia!