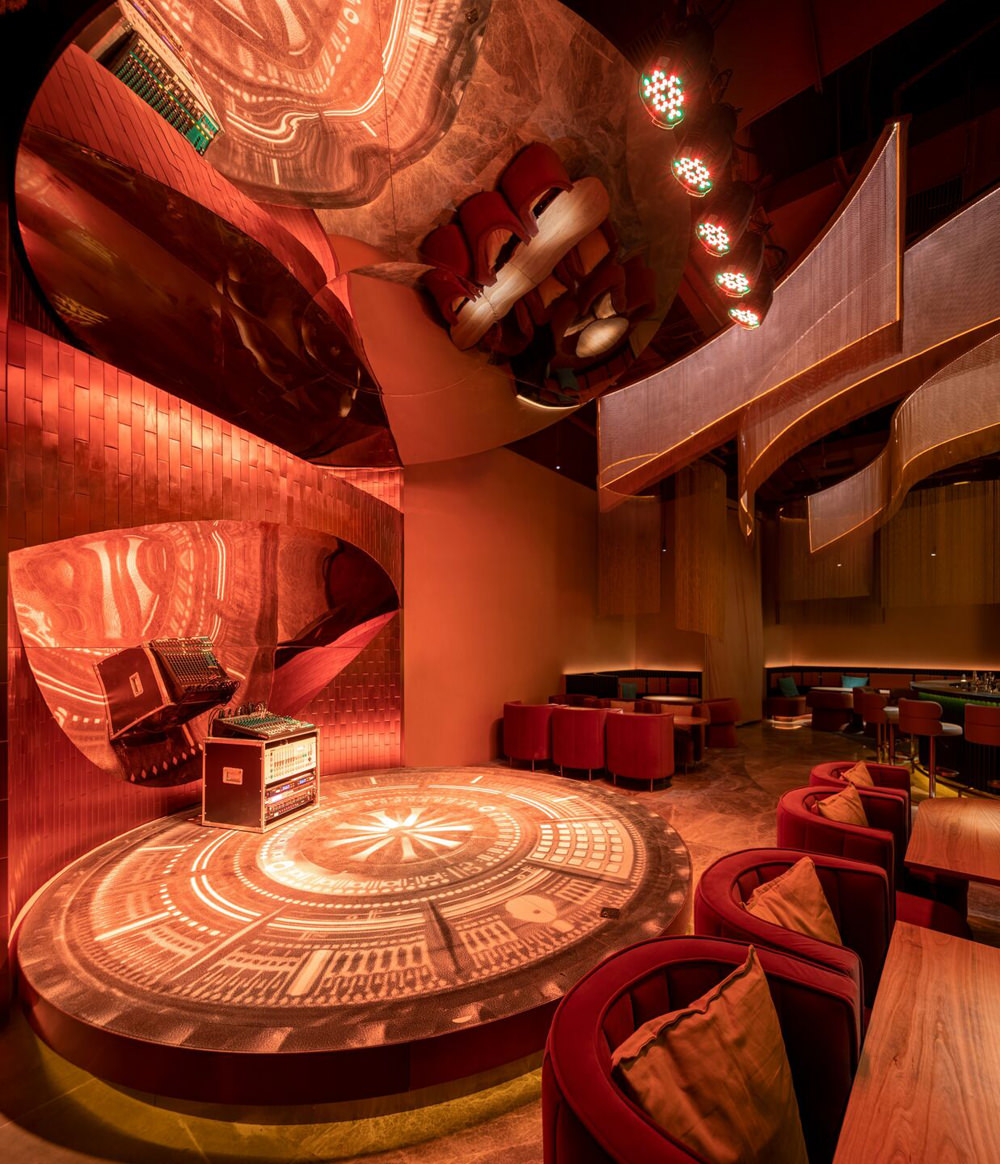 We’re in the mood for some place swanky, chic and low-key fabulous, darlings. Then again, when are we not in that mood? Grab a seat and commence with the imbibing and the chattering and the other forms of not doing what you’re supposed to be doing today. For it is WEDNESDAY and that definitely calls for a little us time, no?

How are we all doing so far? Real question. It feels like a lot of people are coming to terms with the realization that 2021 isn’t going to be the year many hoped it would be as recently as a few months ago. We get it, but we also weren’t pinning our hopes super-high on a quick return to normalcy. We’re trying to set new goals for ourselves at this time, secure in the knowledge that we will still have a lot of lockdown time ahead of us so we may as well be productive about it. We realize that goes against the very nature of this LOunge, but like everyone else, we have our up times and our down times. We’re in the throes of winter and we have a lot of time on our hands with little possibility of connecting with others for some time. It was either little acts of self-improvement or depression for us.

And kittens? If you don’t even want to touch that topic, by all means, chat away about any distractions you want.

This Is Probably Michelle Obama’s Cutest TV Appearance Yet
Here’s your first look at the former First Lady’s cameo in Netflix’s Waffles + Mochi.
Michelle Obama is back on Netflix for a sweet, new project. The former First Lady will appear on the streamer’s family show Waffles + Mochi, which will explore and celebrate food from around the world. In the colorful, puppet-filled series, she will play a supermarket owner who helps best friends Waffles and Mochi, aspiring chefs and employees at the market, as they embark on a grand culinary adventure.

Looks Like There Might Be a Happy Ending For the Woman Who Put Gorilla Glue in Her Hair
A woman named Tessica Brown recently went viral for putting Gorilla Glue Spray Adhesive in her hair to help hold her style in place — rather than her normal go-to product Got2b Glued Blasting Freeze Hairspray.
In a video posted to her Instagram page last week, the Louisiana resident explained how she had run out of the latter product, which prompted her to test the glue. However, when she attempted to rinse it out, she discovered that her hair was stuck — and it’s been that way for around a month now.

Andra Day Is Ready for a Different Kind of Spotlight
The Grammy-nominated singer takes on revolutionary jazz singer, Billie Holiday, in Lee Daniels’s upcoming film.
When Andra Day was initially approached about auditioning for the title role in The United States vs. Billie Holiday, director Lee Daniels’s new film about the revolutionary jazz singer, she balked. “First of all, (a) I’m not an actress, and (b) just no,” says the 35-year-old singer and songwriter, who credits Holiday, nicknamed “Lady Day” by jazz saxophonist Lester Young, with influencing her own musical style. For a first-ever acting gig, playing a figure of that magnitude felt daunting. “I was like, ‘I don’t want to remake Lady Sings the Blues,’ ” Day says, referring to the 1972 Holiday biopic that earned Diana Ross an Oscar nomination. “I love Diana’s performance. She murdered it. I’m good.”

The Line of Succession to the British Throne, Explained
Where does your favorite royal stand in line for the crown?
The British line of succession delineates who will inherit the throne and become the king or queen of Great Britain. Queen Elizabeth II is the current monarch, having reigned for nearly seven decades. After the queen, her firstborn, Charles, Prince of Wales, will rule, followed by his firstborn, Prince William, Duke of Cambridge, and then his firstborn, Prince George. Still, where do other known royals like Princess Charlotte and Princess Beatrice fall in the line for the crown? Whether you’re watching the new season of The Crown or brushing up on your royal knowledge, scroll through to see how close your favorite royals are to becoming the heir to the throne.

The Ancient Wisdom of Aphrodisiacs
Food and sex are the most basic human drives. It’s no wonder that aphrodisiacs—food and drink with a reputation for making sex more attainable or pleasurable—are named after the Greek goddess of love and beauty, Aphrodite. (She was known as Venus to the Romans—Latin for love or sexual desire.) The femme fatale of Mount Olympus and one of the most powerful ancient gods, Aphrodite’s roles as mother, seductress, instigator of sexual desire, and patroness of brides were popular subjects in ancient art.

Aunt Jemima announces new name, removes ‘racial stereotypes’ from product
The new name is an homage to the mill that began making the pancake mix in 1889.
Aunt Jemima is getting a new name, new logo and new look after announcing that it would be dropping the brand name following criticism that it featured a caricature of a Black woman that was a racist stereotype.
Aunt Jemima brand was started in 1889 by two men, Chris Rutt and Charles Underwood, and the company brought on a Black woman, Anna Robinson, to portray Aunt Jemima starting in 1933. The character was later portrayed by actress Aylene Lewis in the 1950s and 60s.

Everybody Hates Millennials: Gen Z and the TikTok Generation Wars
The video-based platform may not have created generational animosity, but it’s happy to fan the flames
TikTok is a young platform, both in terms of the company’s age and that of its primary user base: according to market research company GlobalWebIndex, more than 40 percent of TikTokers were between sixteen and twenty-four in 2018. Less than two years after its merger with the Musical.ly app in the US, it has been downloaded more than 2 billion times and was the most downloaded entertainment app of 2020. The year’s most viral videos—a man skateboarding to Fleetwood Mac’s “Dreams” while drinking cranberry juice, an animated llama dancing to a Russian cereal jingle, a six-ingredient recipe for “carrot bacon”—sound alternately banal and bizarre. But, once you watch them, it’s easy to understand why the video-sharing platform, first launched in 2016 in China, has grown massively popular in the US and Canada.

Nobody Did Glamour Like Mary Wilson and the Supremes
Mary Wilson, a founding member of the Supremes, has died at age 75. Over her impressive, decades-spanning career, the late singer made music history. Not only was she in one of the most successful Black acts of all time, but her iconic stage look also continues to be one that is often imitated, but never replicated.
Wilson grew up in the Brewster-Douglass Projects in Detroit. In 1959, when she was just 15-years-old, she was invited to join a group called the Primettes with fellow members Diana Ross and Florence Ballard. The trio changed their name to the Supremes in 1962, and were signed to a record deal. From there, the group was catapulted into global fame, enjoying five consecutive number-one hits for songs such as “Where Did Our Love Go” and “Stop! In The Name of Love.”

How 1970s VCR dating paved the way for Tinder and Hinge
Great Expectations, which existed into the ’90s, was the original dating technology.
Starting in February 1976, lonely people across Los Angeles drove to a windowless, one-room office on the 18th floor of a building in Century City — the first outpost in what would soon become a national dating franchise called Great Expectations. There, in a room crammed with two TVs, a set of chairs for interviewing, and a stack of cassette tapes, they stepped into the future of dating.

The soon-to-be head F1 racing engineer: ‘It’s 100% an achievable career for women’
Ever heard of Sabré Cook? At only 26 years old, the racing car driver and engineer has a world championship, Renault F1 work experience, and the title of first female to win the SKUSA Pro Tour National Championship under her belt. She competed in the inaugural W Series season in 2019 and came 12th, and she’s also trained with the Infiniti Engineering Academy, working at Renault F1, focussing on composite design.

Missing museums during lockdown? You can now explore the V&A online
Enjoy virtual access to more than 1.2 million of the museum’s priceless objects
This week, the V&A has responded to the needs of art and culture in a digital age, and uploaded more than 1.2 million of its fascinating objects for online consumption.
The new Explore the Collections platform provides a revolutionary new way to interact with the museum’s treasure trove of exhibits. Wherever you are in the world, you will be able to search, view and learn more about the artefacts and artworks on display. It is all part of the museum’s dedication to broadening access to national collections, even with the pandemic closing its doors.

‘I’m Not a Cat,’ Says Lawyer Having Zoom Difficulties
The video was immediately shared widely and brought joy to many. The lawyer, Rod Ponton, said he was happy people got a much-needed laugh.
Courts usually don’t let cats argue cases. But here was Rod Ponton, a county attorney in Presidio County, Texas, unable to figure out how to turn off the cat filter on his Zoom call during a hearing on Tuesday in Texas’ 394th Judicial District Court. The result was a video immediately hailed across the internet as an instant classic, in the rarefied company of videos like Knife Kid and BBC Dad. It offered an injection of harmless levity when many people are experiencing a rough time — and Mr. Ponton took it in good spirits. “If I can make the country chuckle for a moment in these difficult times they’re going through, I’m happy to let them do that at my expense,” he said in a phone interview on Tuesday afternoon.

The Birria Boom Is Complicated, but Simply Delicious
With infinite variations, the regional Mexican stew is now a social-media star in Los Angeles and beyond.
Right out of the pot, the steamed meat isn’t just tender, but in places deliciously sticky, smudged with chile adobo, falling apart, barely even connected to the bone. It comes with thick, soft tortillas, made to order, and a vibrant salsa roja. The Moreno family has been serving birria exactly like this for about 20 years. “Sometimes I think we should update our menu,” said Rosio Moreno, 23, whose parents started the business out of their home in East Los Angeles. “But we don’t want to change the way we do things because of the hype.”