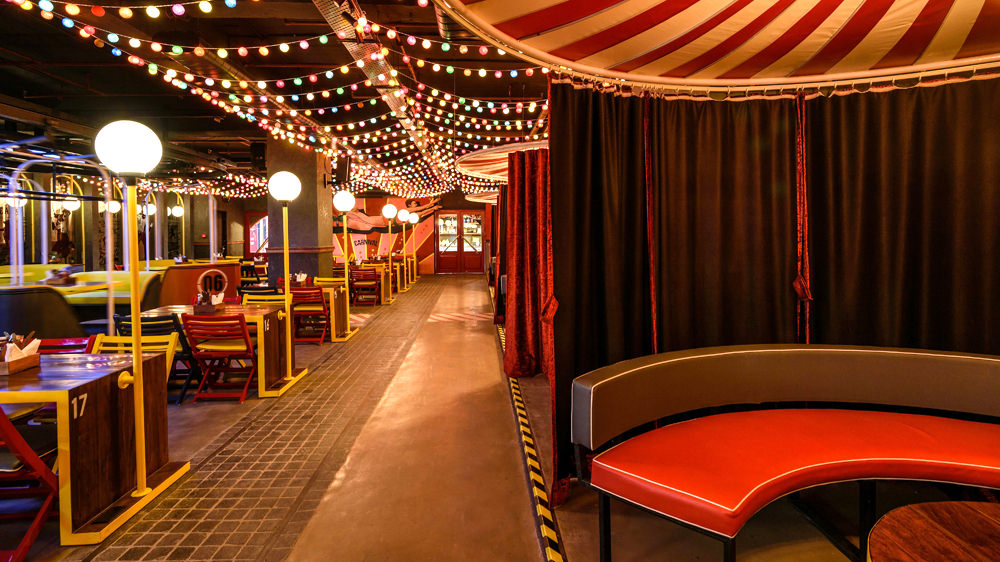 We’re feeling the need for a little bit of circus time today, kittens! Not the real circus, though. Clowns are scary and animal abuse is no fun. But even so! The circus aesthetic is fabulous and fun and we think bold, bright, primary-colored surroundings are just what we want right now.

Today is TUESDAY. Whatever.

While everyone else may look back at this time period and think of hand sanitizer and toilet paper shortages, we think we might just wind up thinking of this time as The Year of Bananas. You see, for the third time in the last ten months, we thought we were ordering six bananas from the online grocery menu when in fact, we were ordering six BUNCHES of bananas, for a total of over 30 bananas sitting on our countertop. As all non-gorillas know, bananas become icky in a very short period of time. As all of you probably don’t know, Tom does not love most baked banana goods. Even so, we’re scrambling to find a use for half of them while we shove the other half down our throats. Everyone says Chrissy Teigen’s banana bread is amazing, but Tom’s a food snob who tends to feel somewhat less enthusiastic about recipes that include pre-packaged products; in this case, vanilla pudding mix. And yes, we absolutely agree that if this is the worst problem we face this week, we are hellaciously privileged people.

Talk amongst yourselves while we toss our banana salads, darlings! Not a euphemism!

In a Sea of Low-Rise Jeans, I Found Middle-School Solace at the Outdoor Store
I grew up in Ashland, a small town in Southern Oregon, where the “It bag” was the canvas tote from our local food co-op. And while later I would develop an obsession with True Religion jeans, my earliest connection with retail fashion occurred at The Ashland Outdoor Store, a shop for intrepid explorers of the area’s surrounding mountains.

The First Dogs Have Arrived at the White House, Complete With Their Own Twitter and Instagram Accounts
In a statement, the first lady’s office said that Champ is “enjoying his new dog bed by the fireplace and Major loved running around on the South Lawn.”
The last time there was a dog in the White House was during the Obama administration, when the first family lived there with their two Portuguese water dogs, Bo and Sunny. Former president Donald Trump was the first occupant of the White House not to have a dog in more than 100 years—since William McKinley was president, in 1897. In 2019, he told supporters at a rally that he “wouldn’t mind having” a dog, “but I don’t have any time.”

Salamishah Tillet’s Love Letter To The Color Purple And The Black Women Who Came Before Us
One of my fondest childhood memories is sitting in my grandmother’s living room, watching The Color Purple. Details like the year and my exact age are hazy, but what’s crystal clear is that, despite having watched the film a hundred times before, witnessing Celie’s journey with my Granny, mama, and Aunt Mae felt like the first time. As three generations of Armstead women laughed, cried, and loudly sang, “Maybe God Is Tryin’ To Tell You Somethin’,” we shared an unbreakable bond: a spiritual connection that no one else could replicate or take away.

18 Great Cast-Iron Skillet Recipes
Cast-iron skillets are an incredibly versatile kitchen tool, able to fry eggs, sear steaks, and even bake brownies (yes, brownies!). And in this roundup, we’ve gathered some of our favorite ways to use them, from making a polenta Dutch baby for the ultimate brunch to whipping up a skillet fruit crisp that can be adapted for any season. These long-lasting pans can be used to make breakfast, dinner, and everything in between—read on for even more of our favorite cast-iron skillet recipes.

China on Tapestry
Explore this magnificent tapestry from “The Story of the Emperor of China,” part of a set commissioned and woven in France in the late 1600s. Hanging nearly 14 feet tall, weavers worked by hand for nine years to create the group of ten large textiles.

37 Breathtaking Couture Jewellery Moments From The Original Supermodel Era
Couture doesn’t do half measures. In the years since British designer Charles Frederick Worth founded the first couture house (House of Worth) in 1858 on Paris’s Rue de la Paix, scene-stealing bridal gowns, unfathomably intricate hand-stitched beading and acres of delicate lace have become (just a few of) the artisanal signatures of the world’s most unapologetically ostentatious biannual fashion week.
The magic behind the fashion alchemy? High-drama silhouettes, electric personalities (on and off the catwalk) and a blinding array of jewellery.

How Adele Refused To Play By The Rules For Over A Decade — And Won
As she celebrates the 10th anniversary of her record-breaking album 21, we unpack how the stadium-selling star has remained elusive during the era of celebrity overexposure.
In the 21st century, an age shaped by social media and unfettered access to every star’s personal life, being missed by the public is a scarce thing. As the music industry becomes populated by swathes of singers trying to make it, there’s an expectation that they all must stay visible and present to make the most of a strong moment, as if leaving your ‘spot’ means it’s likely that someone else will occupy it in your absence. But when you’re as revered as Adele, said ‘spot’ is impossible for anyone else to fill, and so you’re afforded the freedom to take five and contemplate your next step.

How to stay flexible and ease back pain when working from home
A physiotherapist shares his top tips
Whether you spend your days with a lap tray on the sofa, sat at the kitchen table or in a dedicated home office space, you’re bound to have suffered some sort of pain as a result of your current WFH situation. From back, shoulder and neck ache – caused by hunching over a laptop all day without proper seat adjustments or screen breaks – to screen-induced headaches, it’s a problem that won’t go away without making some changes.

What a recent Covid-19 flight outbreak tells us about spread on planes
“Is flying safe?” is the wrong question.
Outbreaks of Covid-19 on flights have been documented multiple times since the start of the pandemic, albeit seemingly more so before masks were widely worn on planes. But one recent outbreak on a long-haul flight from Dubai to New Zealand highlights why flights can be anywhere from safe to unsafe depending on a number of factors. It’s also an example of why viral transmission is not so much a single event, but the result of multiple lapses in safety.

It’s Casserole Season. For That, There’s Polenta Lasagna.
Thoroughly miserable weather calls for thoroughly cozy dishes, preferably covered in mozzarella.
On the surface, it looks just like a traditional lasagna, a blanket of brown-edged mozzarella tucked into the red sauce. But cut yourself a slice, and you’ll see the difference. Separating the creamy ricotta layers are thick, yellow stripes of polenta speckled green with spinach. With its gentle corn flavor, the polenta offers a sweet contrast to the savory tomato sauce, along with a pleasingly nubby texture that’s firm but not chewy.