After last week’s slightly dreary (in our opinion) “put the queens through their paces with a tough production number” episode, Drag Race UK came back with the kind of episode that we tend to think sums up the series best and explains its wide and lasting appeal: the “just let the queens be a bunch of queens” episode.

After years and years of reality television recapping, we have started to reverse our opinions on a lot of stuff we used to believe. Producer manipulation can be good! Challenges don’t really matter in the end! No, really. With a show like Drag Race, when the overall competition is based on the idea of being someone who’s just plain fun to watch, sometimes the very best thing you can do as a producer is just give the queens space and time to interact instead of setting up a bunch of complicated flaming hoops for them to jump through. Not only is it a great way to get to know the queens better; not only does it give them an arena to showcase what their drag is about, but it also allows queer people some time in the spotlight to just be big ol’ queers. Say what you will about Drag Race. God knows its fandom can be among the more cynical out there, but for our money, the reason the show holds so much value in the culture is because it backs off from the production fuckery and allows for two non-binary people to just have a conversation about who they are, what they fear, and what form their struggle took. In a setting more fraught with rules and strict criteria than Drag Race, conversations like theirs simply wouldn’t happen.

But Drag Race’s appeal doesn’t have to be about revealing and heartfelt conversations about important issues of identity and gender (although that’s a big part of it, of course). When we say it’s at its best when it gives the queens some room, we mean things like an utterly pointless limbo contest. We can remember back in the early days of our Drag Race recapping, we might have sniffed at any challenge that didn’t revolve around obvious skills and talents needed to be a drag queen, but a lot of queens are at their absolute best when they’re just winging it and bouncing off a crowd of other queers. In a way, these sorts of formless, just-have-fun-with-it challenges can be some of the best indicators of which queens are the most flexible in a situation. But really, if a queen can take anything the show throws at her and turn it into some form of performance, then by definition, it’s a challenge that centers the very skills the show is meant to be rewarding. Winning a limbo challenge doesn’t make you a frontrunner or even a good drag queen. But if you can be funny while doing it, if you can make other people laugh at your attempts and even better, your failures, then you’re showing Ru you’ve got what it takes to be there. Similarly, it can often be to the show’s benefit (especially if it’s a well-cast season), to just ask the girls to make something pretty to wear and then step back and let their issues play out. Sure, it’s manipulative for Ru to ask a raging comedy queen like Ginny Lemon to tap into the one type of drag most anathema to her – sexy drag – and give that a go instead of serving up something expected. To be fair, a personal challenge like that could just as easily have resulted in some sort of epic meltdown or knockdown-dragout fight – and the producers and Ru would have likely been as thrilled with that outcome. But when you put a bunch of gender non-conforming queer people in a room together, a lot of interesting stuff can come up in the mix. Simply asking a non-binary comedy queen to be sexy is enough to spur on a whole conversation about being non-binary and about the kinds of self esteem issues so many queer people sustain. Shade, fashion, comedy and music aside, these are the moments that make Drag Race such a phenomenon. Having said that, there was plenty of producer fuckery going around. It never really amounted to too much drama, but pairing the queens off and then informing them that one half of each team would wind up in the bottom was a pretty good twist. But this was also a deceptively important challenge because it got a bunch of rough UK queens together, put them in front of Ru and Michelle, and served them a lesson on the kind of drag the competition is going to expect from them going forward. Like it or not, Drag Race adheres pretty closely to pageant criteria and it expects its girls – no matter where they’re from – to serve up extremely polished looks. 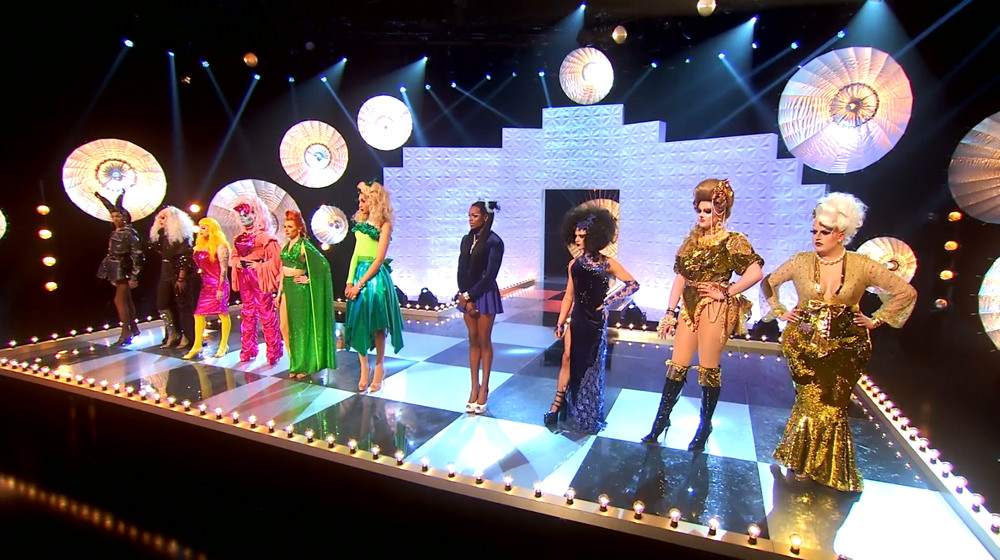 And the results were, in their own way, pretty illuminating, since each team member started from the same place, with the same materials and theme. To be fair, Drag Race was never a fashion design competition, nor should too much weight be placed on who can sew and who can’t. There’s a huge DIY component to almost all drag when queens are starting out, but it’s not always a given that a queen can – or should be able to – make her own outfits. Like the limbo challenge, it’s a chance for the queens to show how they work under pressure and what kind of drag they can turn out when left to their own devices. It’s a chance for them to spin polish out of trash, which is Ru’s favorite kind of challenge. Tayce’s look had a high fashion feel to it, but was pretty dicey in terms of construction. Even though she was on the bottom, it was clear she wasn’t going to be sent home for poor craftsmanship. She served them just enough of a look to intrigue them. A’Whora’s look was the best of the lot and we don’t blame her for being upset that she didn’t win. 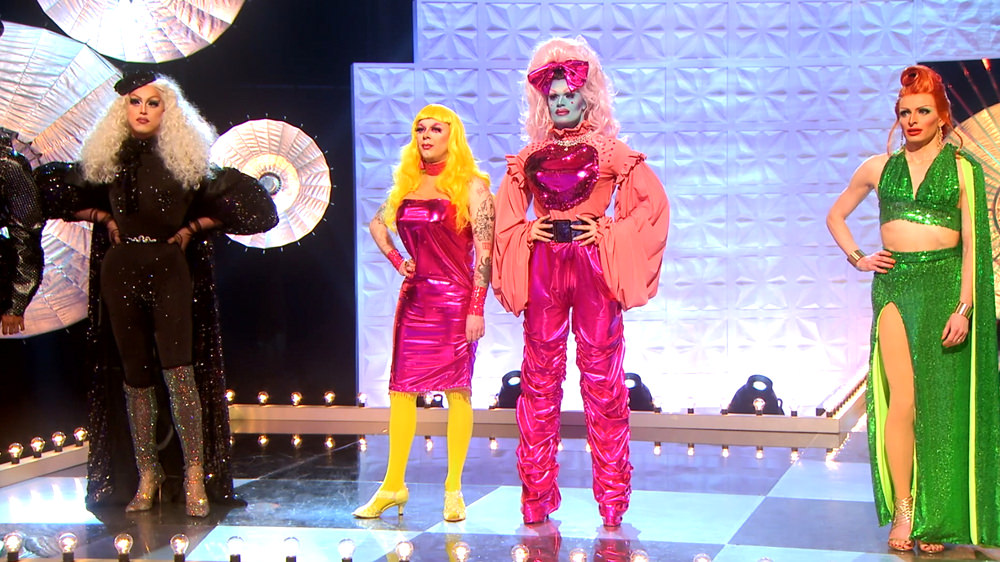 Ginny’s look was not great, but we kind of knew they’d never send her home for it. She wound up on the bottom for obvious reasons, but the judges all loved that she stepped so far outside her comfort zone. It would have been cruel to ask her to do something so hard for her and then send her home for less-than impressive results. Sister Sister pretty much got ignored by the judges, even though she was considered the better of the two. It’s impressive in its construction, even if the design is a little confusing. We honestly thought Tia had a chance here. Don’t get us wrong; her outfit was bad, but we don’t see how Veronica’s was much better. Sure, it’s lined, but it’s a hideous and badly made ensemble. At least Tia’s felt like it was a little fun and a little camp. Having said that, the judges weren’t wrong to point out that Tia’s built for high fashion looks, which makes this sort of campy take seem like she doesn’t know where her strengths lie. Asstina’s look was simplistic and worse, unexciting. No one could really tell what the point was and she wasn’t particularly good at explaining it. Bimini did what Tia should have: she draped fabric on herself and served up an amazing face and hair, letting styling and attitude give it a high-fashion feel. Ellie’s panto wench was shockingly well done. We’d have given the win to her over Lawrence. To be fair, Lawrence’s is pretty amazing too and she won because Ru is enamored of her combination of rough bravado with high polish. We can sort of accept that Lawrence won over Ellie because her sewing skills are clearly impressive, but we think it was a bit silly that she won the whole challenge. A’Whora’s had way more of a high-fashion feel. Going into the lip sync, we could have sworn Tia was toast, but even Asstina seemed to realize about halfway through the song that she was up against much harsher competition than she realized. Asstina’s gorgeous and it’s a shame she couldn’t step it up to the level the judges wanted to see from her, but Tia’s got a spark to her. She has way more potential from both a comedy and a looks perspective. We hope Mama Ru molds her into a contender.