The Grand High Empress of Christmas ascended to her throne last night, serving up sparkle, jingle, and camp in the biggest, most glamorous Christmas drag queen revue television has ever seen.

Gotta hand it to an artist who knows where her niche is and leans as far into it as humanly possible. Miss Mimi makes a shit-ton of money off her iconic Christmas single each year and she’s done a fantastic job of turning it into a brand. The music industry doesn’t exactly have a great track record when it comes to pop divas who turn fifty, but she’s carved out something distinct to herself that she seems to have a lot of fun with. We said the other day that Gwen Stefani had settled into a Dolly Parton-esque form of branded drag, but when it comes down to it, Mariah Carey’s Christmas Queen persona comes pretty close to the master herself, in terms of turning glamour and camp into an international – and very lucrative – brand.

And like we said, it’s HIGH DRAG and should be respected: There’s no coyness with your girl. She will be your Disney Christmas princess and she sees no reason to go about it quietly or subtly. The Christmas variety specials of our youth came nowhere near this level of high glamour. 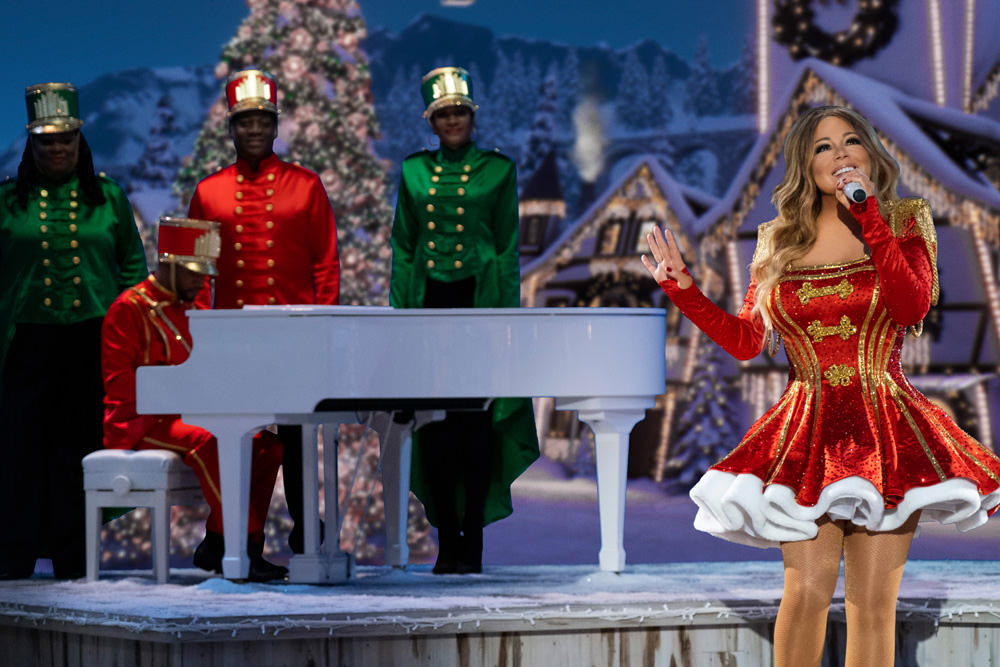 She also, as we noted, has a highly evolved sense of camp and her own place in the pantheon. Seriously, we love this for her. We can remember about a decade ago when her reputation wasn’t so great and it didn’t seem like her heart was into whatever material she was putting out. But age and experience seem to have given her a healthy level of self-knowledge and that’s really come across in her work in latter years. She’s more energized and more fully herself somehow.

We really didn’t mean to turn this into some sort of salute to Mariah. We’ll make it up to you by being bitches now.

Whistle-tone alert! Shield your dogs! We don’t like Mimi’s dress here. There. We said it. Fun number, though. We just don’t get the costuming here: We get that she’s supposed to stand out as the star of this here show, and we even kind of respect the choice not to go with another red dress to set off the two green dresses on either side of her. But this comes off like a dark gray on screen, which feels like such a non-Mariah sort of choice. Granted, the shortness and tightness is totally on brand, but we think we’d have liked this a bit more if it was, say a deep purple. Ariana’s dress is both cute and surprisingly simple. Jennifer Hudson’s dress looks spectacular on her but we don’t love the gloves at all.