A salute to SJP and tossing off any pretense in this, the least pretentious time of our lives. Miss Lady opened a shoe store just as the worst health crisis in a century hit, closing everything down. As people who published a book a week before every book store in the world closed its doors, we can more than sympathize with the predicament SJP found herself in. So what’s a working gal with a constant trail of paparazzi behind her supposed to do when faced with a new retail venture at the worst time to open one? Use them to her advantage, of course. She’s been hitting that store several times a week, ostensibly to “help customers,” but really it was to provide the store a constant stream of coverage, knowing that if she showed up in something Carrie-esque each time (which she did), there’d be pictures for sale and those pictures would be snatched up by content-hungry sites at a time when very few celebrities were on view for the celebrity-viewing public. It was a savvy maneuver by someone who knows very well the entire economy that surrounds the celebrity sphere and manipulated it to her advantage. This ensemble and set of posed publicity shots feels like a well-deserved victory lap. In true Carrie-esque fashion, she wore something ridiculously impractical but extremely photogenic: 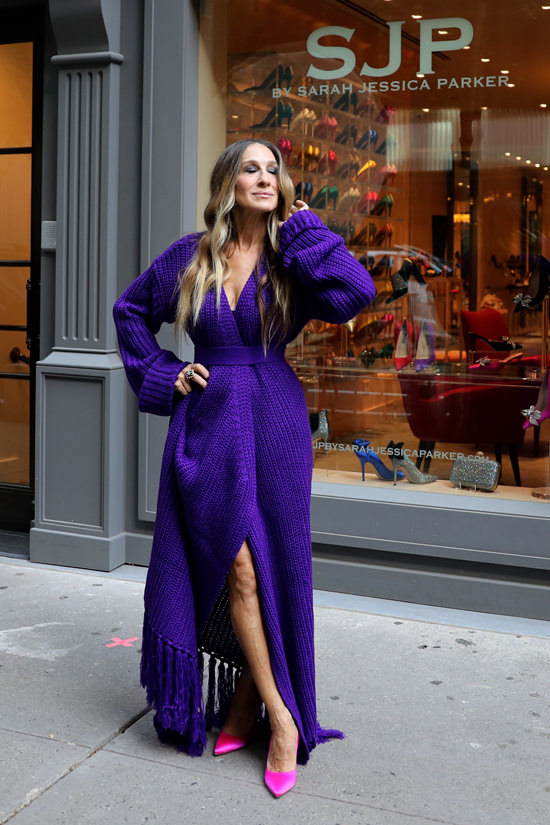 It also happens to be just about the most “2020” dress we’ve seen yet. It’s basically whatever you wrap yourself with while your hanging on the couch rendered in dress form. Looks pretty comfy.