Home » Television » Julia Garner on the Set of “Inventing Anna”

Julia Garner on the Set of “Inventing Anna” Kittens! Location shots! With a hot star in chic looks! Oh, it’s been SO LONG (223 days, if you want to be precise about it). Thank you, Santa!

Recent Emmy winner Julia Garner is out here on these streets shooting a Netflix limited series about the true story of stylish hustler Anna Delvey …and we’re just gonna be lazy asses and let the press release take it from here:

In Inventing Anna, a journalist with a lot to prove investigates the case of Anna Delvey, the Instagram-legendary German heiress who stole the hearts of New York’s social scene – and stole their money as well. But is Anna New York’s biggest con woman or is she simply the new portrait of the American dream? Anna and the reporter form a dark, funny love-hate bond as Anna awaits trial and our reporter fights the clock to answer the biggest question in NYC: who is Anna Delvey? The series is inspired by the New York Magazine article “How Anna Delvey Tricked New York’s Party People” by Jessica Pressler.

She seems tailor-made for this role – and for these looks: 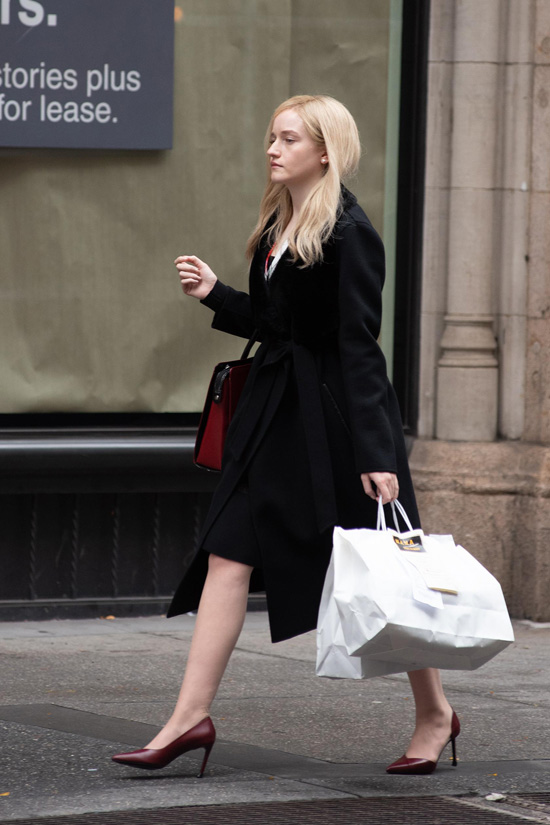 The second one is pretty toned down – to the point that it makes us wonder if there’s some period of time separating the two scenes because that first look? With the plaid coat, quilted bag, leather gloves and dress with a scalloped hem? That’s just perfectly too much. It’s a costume that announces itself loudly by design. Can’t wait to check this out.