Because we’re all nesting and locked down and not wearing clothing with buttons at the moment, we figured we’d continue our Top Ten Royal Lewks series with our favorite Cathy of all the Cathies (Gown, Day Dress, and Coat Cathy being the other models): SPORTY CASUAL CATHY.

Her more formal duchess wear tends to be conservative and stately and very much a studied response to the public’s expectations of her. In other words, when it’s gowns and dresses, she gives the people what they want. She serves them the expected Royal Drag. But when she ditches the drag for the sportier looks, especially on those relatively rare occasions when she feels she can opt for pants, it seems to us we’re getting much more of Cathy the person through her style choices. Which makes her no different from just about everyone, because let’s face it: most people are more comfortable wearing casual clothing that allows them some freedom. Here then is your Princess in Pants, wearing the best sporty-cazh looks of her tenure, as chosen by a committee of us. In no particular order… Always fun to see her in any sort of pattern, what was great about this look is that it was both a nod to being culturally appropriate in her dress choices while also looking like an outfit millions of women in her age group probably own. She never wears stripes as often as she should. She looks fantastic in them. This whole outfit is adorable. We love that she kinda dressed like Hillary to meet Hillary. If there’s a standard Sporty Cathy uniform, then this would be it. We had to strike about a half-dozen extremely similar outfits from the list. Girlfriend loves herself some loden greens. It’s Mrs. Cathy on Holiday! An Un-Cathy sort of look that nonetheless looks like something a million other women would wear. She struck the perfect tone making her final public appearance before Covid lockdown hit the country, visiting ambulance services personnel in the relatively early days to offer support and a morale boost.

The Duchess also loves herself some tighty-tight-tight skinny jeans when she can get away with them. The plaid jacket makes the perfect royal touch to elevate this pair. And she got good use out of it, deploying it again with this sassy pair of wine-red cropped pants and a chunky heel. 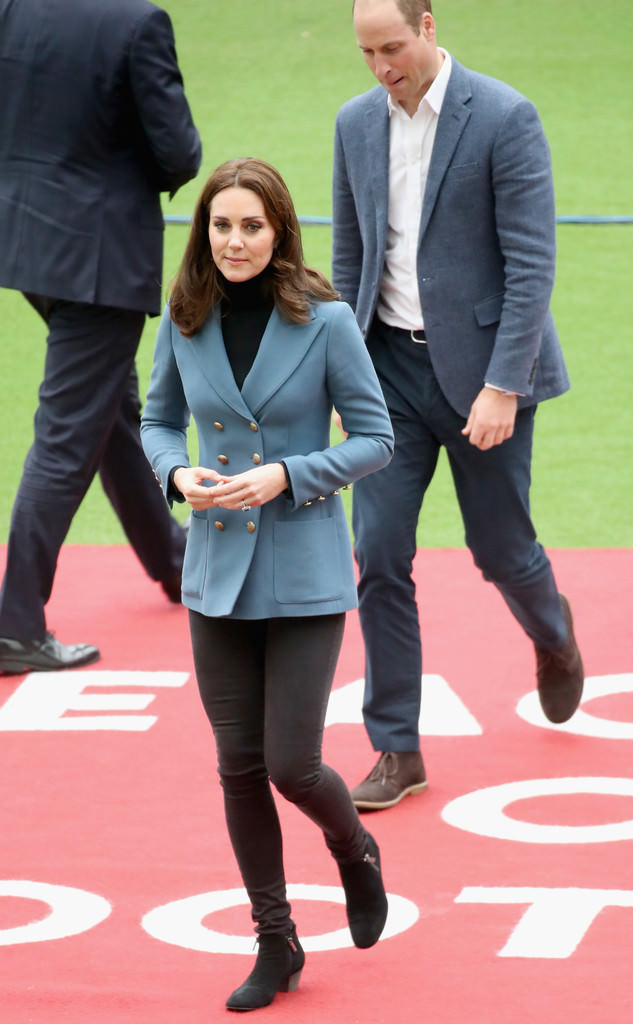 It’s pretty much her go-to trick for dressing up her preferred outfit of skinny jeans and a turtleneck. She snags herself some sort of killer jacket to finish it off. It’s a great way to make generic casual items look dressy and coordinated.