Looking over Best Actress nominee Charlize Theron’s awards season looks, we’re struck by how poorly they represent the one assessment we made about her throughout awards season. We kept saying “Wow! She’s taking risks and trying to do something different! You never know what to expect with this one!” And while that has been generally true of her non-formal looks (like the one we included from the Palm Springs Film Festival), her formal red carpet choices have stuck somewhat closely to her standard preferences. She leans into the Hollywood Glam thing by deploying glitter, largely avoiding color (with notable exceptions), serving up a little tasteful sexiness, and topping it off with light makeup. It’s Body and Glamour, served up with elegance and restraint. That’s the Theron style brief in a nutshell.

Charlize Theron in Tom Ford at the Governors Awards Charlize Theron in Christian Dior at the Golden Globes Charlize Theron in Celine at the Critics’ Choice Awards Charlize Theron in Givenchy at the Producers Guild Awards Charlize Theron in Givenchy at the SAG Awards 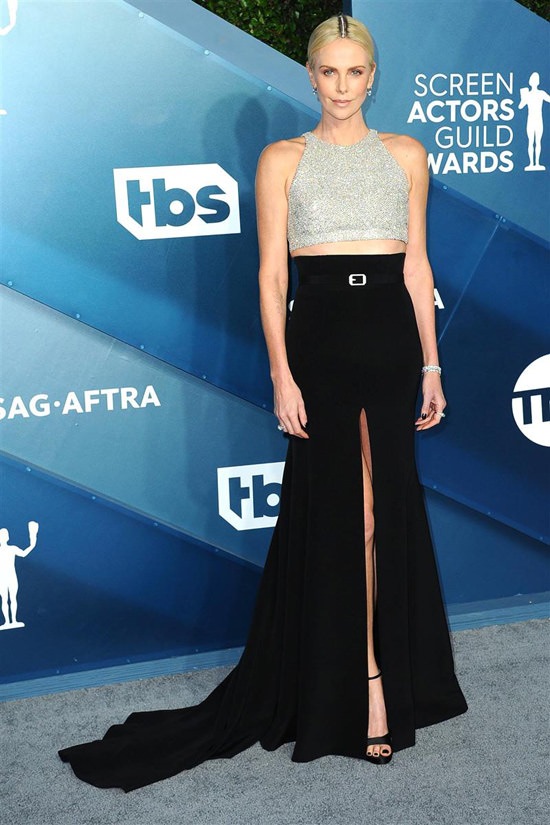 Charlize Theron in Dior Couture at the BAFTA Awards Our favorite is the regal Louis Vuitton, but the fact that she wore it to the Costume Designers Guild Awards is an indicator that she considers this kind of style something to do on a fun night when the pressure’s off her. It’s not totally outside the realm of possibility that she would wear a bold color on Oscar night, but as you can see, it’s not a well she returns to often. Even so, we think she might go for it just as a way to stand out. She does tend to fall back on a golden-goddess style more often than not, though. We’d say it’s a very high chance she’ll go for body-con glitter, with a decent alternate chance that she might instead choose sweeping drama and bold color. She’s probably the one we’re most looking forward to seeing what she’ll wear.