Home » Fashion » Style File: Charlize Theron in Givenchy at the...

Style File: Charlize Theron in Givenchy at the Producers Awards and the SAG Awards We really want to give Miss Charlize credit for making some particularly odd style choices for her Oscar campaign. Given her status and looks, she’s probably under considerable pressure to serve up standard goddess glam. And to be fair, she’s not exactly pushing the envelope or shying away from typical movie star design elements, but she is trying to put “interesting” at or near the top of her list of priorities and on some level, that’s to be commended. On another, more mundane level, however …

Charlize Theron in Givenchy at the Producers Guild Awards 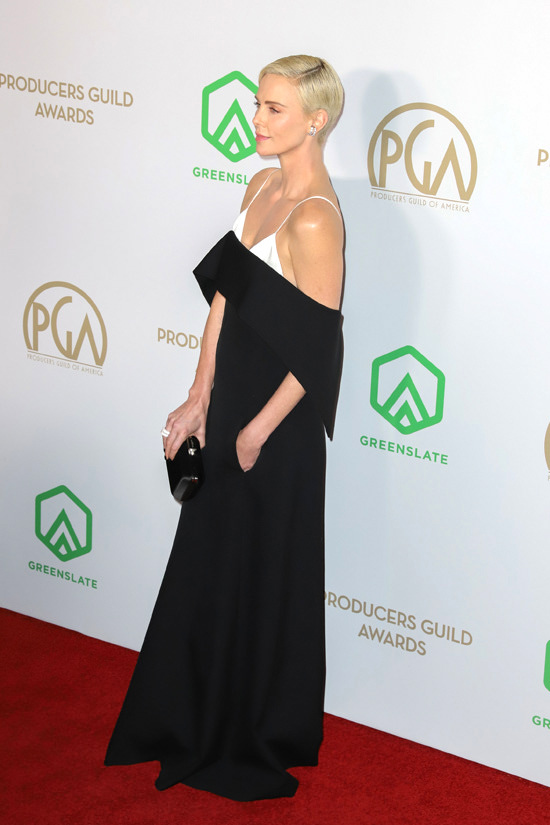 We’re just not feeling it. Yes, it’s weird and different. But it also looks like she’s just wearing two really boring dresses and one of them is in the process of trying to escape further scrutiny by removing itself from her. For having such a goofy and focus-pulling element, it’s all so drearily dull.

Charlize Theron in Givenchy at the SAG Awards She’s really into these gowns that look like partially like activewear or bathing suits. It’s not a bad preference for her, but we question how some of it plays out. The skirt is gorgeous and we don’t mind the idea of a glamorous and sparkly crop top paired with it, but the proportions feel a little off somehow and the shape of it looks too much like a tank top to us. It just doesn’t marry well with the skirt. As for the hair jewelry, credit for the attempt, but it looks like very sparkly dandruff to us. It also looks hellaciously uncomfortable to wear.