Joe Manganiello is on the cover of the Men’s Health June issue photographed by Jeff Vallee. 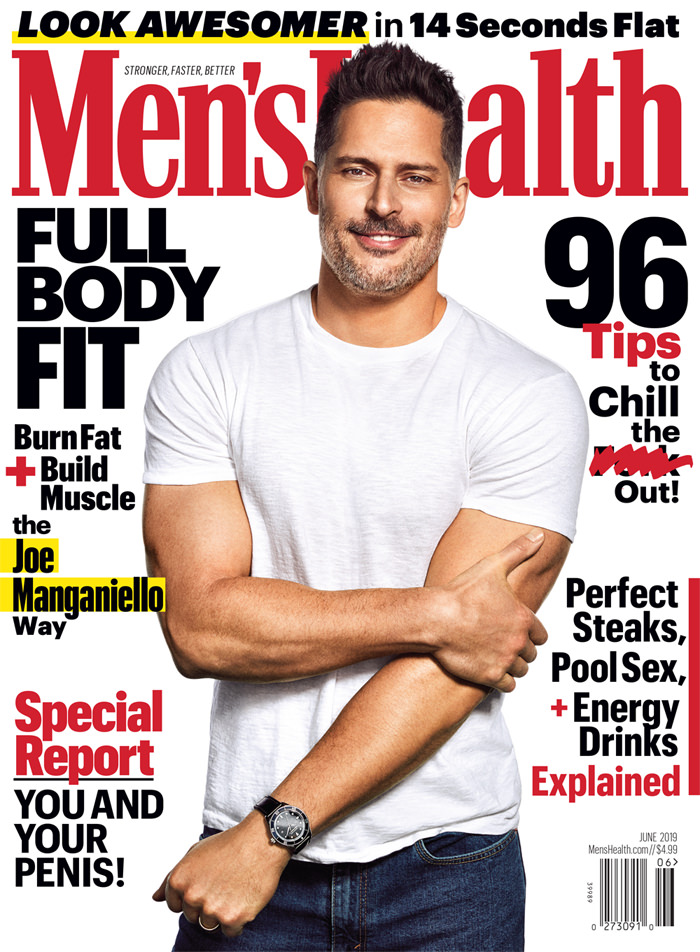 On the female extras on the set of “Magic Mike”: “The girls were animals. Absolute animals…They ripped McConaughey’s thong off at one point, and he had to do a tuck roll backward to get away.”

On deciding to take on “Magic Mike” despite the risk it posed to his career: “I always wanted to make popcorn for smart people…It could have ruined everyone involved. There’s a real risk. That’s a big hole to crawl out of.”

On if he ever feels pressure to get Botox or surgery to keep up with younger actors: “Nooooo. God, no. No fucking way. I mean, look, no disrespect. I just—it’s never even occurred to me.”

On relating to his “Bottom of the Ninth” character, who ends up in prison for accidentally murdering someone: “There was a point where I really thought I was broken beyond the point of being able to be fixed. Drinking was a way for me not to have to deal with me. And I think that acting was a way for me to not have to be me either. So I could go onstage and not be me, come offstage and go to the bar and not be me. Rinse and repeat. I needed to really look in the mirror and get honest with myself about the man that I wasn’t becoming.

On what being a man in 2019 means to him: “It’s the same as it’s always been. You protect, number one, and take care of women, children, animals, the planet. You tell the truth. If I hurt somebody, I apologize immediately. Also, I hold the door open for my wife, and that will never fucking change.”

On what it’s like to be married to a strong and successful woman: “I love that she knows how to take care of herself, obviously, because I needed to be with somebody confident. It takes a really strong and secure individual to handle the types of projects I’ve done. But when we’re at home, we’re opposite in all the best ways and we’re compatible in all the best ways. Masculine/feminine, yin and yang, whatever you want to call it.”

On his marriage to Sofia Vergara: “My life is great because I really like my wife. I like talking to her. I like goofing around with her. We fucking laugh all day long every day. My favorite thing in the world is making my wife laugh so much she cries. It’s the best.”

On transcendental meditation, which he does every day next to his sleeping wife: “I do it as soon as I wake up. Twenty minutes…she’s asleep and I just sit up and do it. There’s a reason why meditation is 4,000 years old. The word mantra—mind-view—I find that to be true. I’ve had some profound things happen to me while meditating.”

The June issue of Men’s Health is on stands May 28. Bottom of the Ninth is out July 19.

Previous post:
Mena Massoud and Naomi Scott at the “Aladdin” Los Angeles Premiere Next Post:
Margot Robbie in Chanel Couture at the “Once Upon a Time in Hollywood” Premiere at Cannes
blog comments powered by Disqus