ELLE talks to Nathalie Emmanuel in the first interview since her ‘Game of Thrones’ character, Missandei’s death, photographed by Allie Holloway and styled by Sarah Zendejas.

Emmanuel delves into preparing for the final season, her character’s demise, portraying a person of color in Westeros, starring in Mindy Kaling’s new mini-series for Hulu, ‘Four Weddings and a Funeral,’ and much, much more. 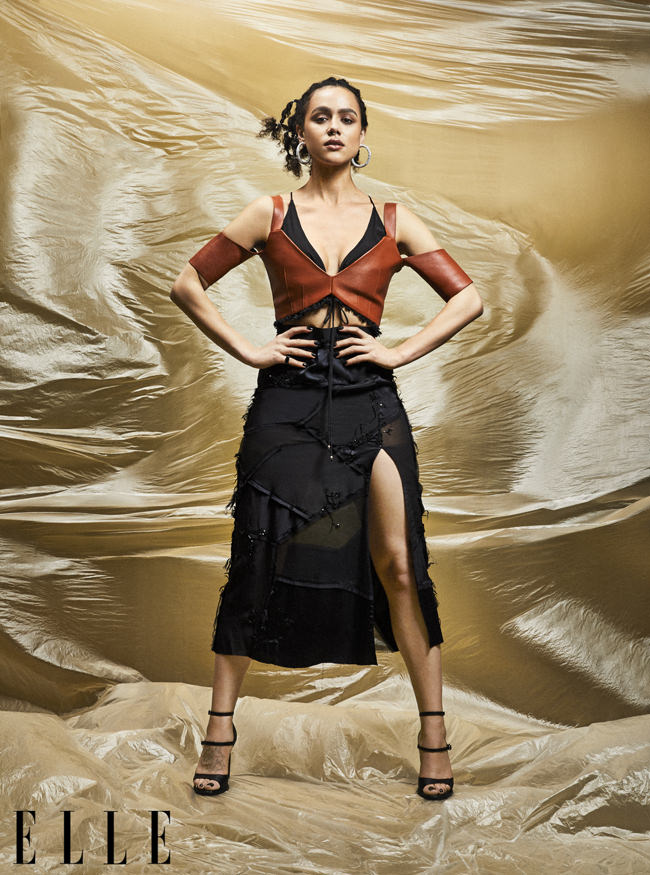 On reading in the script about her character’s death: “As soon as I read that she was captured I was like, Oh, okaaay. I knew. But I was pleased that they gave her death such a moment. It was quite a game changer for the direction of the general story. I always expected to die at any moment. Every time I got through to the end of a season I thought, Oh wow. She made it. It was always a surprise for me, in a show where people go constantly. So I wasn’t particularly upset about her death, but I was upset for the character because I love her, she’s a good person, and she goes out in such a brutal way, in chains, which is obviously hugely weighted because of the fact that she was once enslaved.”

On talking to Jacob Anderson, who plays Grey Worm, about the significance of being people of color in Westeros: “We know that the reality of it is that Jacob and I have been the only two characters of color on the show for quite a few years. It’s in the scripts that they’re looking at us strangely because they probably haven’t seen people that look like us before. It was a deliberate decision to acknowledge it on the page, and one that Jacob and I have discussed, the fact that we were brown people coming into a very white part of the realm.”

On starring in the Hulu miniseries Four Weddings and a Funeral, Mindy Kaling’s reimagining of the 1994 rom-com, who brought in a diverse group of writers and actors: “It just goes to show what we can create when somebody like her is championed, when somebody like her gets to write, gets the funding, gets the production, gets that backing behind her. The diversity of the cast and writers was the whole point, right out the gate. The original Four Weddings is a mostly white movie. In 2019, you can’t make a show or a movie based in London, which is just a big melting pot of culture and race and language and music and food, and not make it diverse. It doesn’t make sense.”