In retrospect, we should have seen this one coming.

All season long, we’ve been happily singing songs of praise for this season, based largely on the idea that the show had, for the first time in many years, cast themselves a crop of fairly rough and unseasoned queens. After years of high-glamour look queens or highly polished comedy queens sweeping in and dominating the competition, we were thrilled to see a high-definition version of the show’s earliest seasons, when a bunch of not-ready-for-primetime queens were put through their shocked and unsteady paces as they hit the big-time unprepared. You know what Drag Race didn’t have in its first, super-rough season? A Snatch Game episode. You know why? Because those bitches weren’t ready. Look, we’re wrapping up our work on our Drag Race book this week and after spending the last 6 months immersed in this world like you wouldn’t believe – not to mention the last ten years of continuous Drag Race recapping from Day One (something very few people can claim, bitches) – there’s at least one thing we can say about the show with absolute, one hundred percent certainty based on reams of anecdotal evidence: The Snatch Game challenge is, by far, the most difficult challenge on Drag Race. Tons of queens have said the same thing (we’d provide quotes but they’re all in the book) and even if they didn’t, the results speak for themselves. People tend to stand out in the Snatch Game challenge just by avoiding being a total disaster. Because being a total disaster is literally the norm in a Snatch Game challenge. You put 8 queens on that stage in their best celebrity impersonation drag and have RuPaul deliberately throw them curveballs on the spot, and there will ALWAYS be far more flameouts than triumphs. In all the seasons of this show and All-Stars, has there ever been a Snatch Game challenge where every queen was on fire and the entire thing was a hilarious romp stocked to the rafters with award-winning comedic performances? Never. NOT EVER. In other news, it was fun to see Jinkx again but goodness, was she ever laying the Grande Dame of the Theatre shtick on a little thick. So she was fine. And that was all she needed to be here. Committed to the character, consistent in her portrayal, with props and bits ready to go and enough quick-thinking to acquit herself at the improvisational parts. She was just … fine. If she’d had to share that set with Jinkx as Little Edie or Bob as Carol Channing or Alaska as Mae West she would have been completely passed over. Honestly, the win should have gone to Nina this week. She’s an old-school queen, which means she’s the most naturally adept at classic celebrity impersonation comedy. The only thing working against her was that her looks here just weren’t that strong. She’s the prettiest and she’s pleasant enough to skate by. That’s why she’s still here. What an utter disaster – and weirdly kind of mean about Whoopi, who he cast as this bitter, elderly failure when that’s not even close to her story and personality. Great impression drag – he contoured his face to look just like her – and he did well with it, but he never took it as far as it should have gone. If there’s one thing about Charo that stands out over all others, it’s that she’s the Queen of Extra. The problem with doing viral or social media stars is that they have no character past the surface. They are, by design and definition, largely cartoons in human form. There was nowhere for Vangie to go with this. She got the look down pretty well but she had nothing to say. Tiffany is loud and in charge of every scene she’s in. If you can’t get to that point, you shouldn’t be doing her. An epic disaster. To her credit, she got the look down. You could tell who she was before she opened her mouth – and ruined it.

#CategoryIs: Sequins on the Runway! ✨💎✨

Who had your fav lewk? 💃 #DragRace pic.twitter.com/nc7cRjdV57 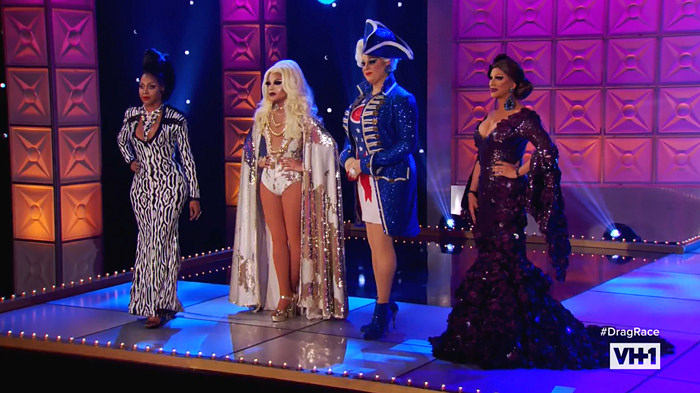 A’Keria served up the very best of pageant drag – just gorgeous. Vanjie clearly didn’t pack any costumes other than bodysuits and the show is just going to dance around that by wagging Michelle’s finger at her. Nina’s drag is PERFECT but he favors a hem length that does him no favors. This would be a better look if that was a gown with a mermaid silhouette. Shuga did what she absolutely needed to do: she showed RuPaul that she can do RuPaul-style drag. Every queen needs to prove that point to her once per season. Ru was rightly blown away. The gown is gorgeous and the makeup opened up her face so you could actually see it. 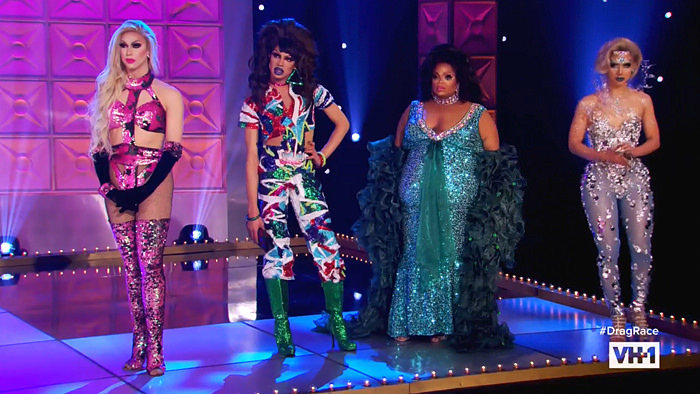 Gotta give it to Brook Lynne. Her runway looks tend to blur together just as much as Vanjie’s, but that bitch TURNED THIS MOTHERFUCKER OUT. Credit where it’s due: that reveal was a top runway moment in Drag Race herstory and she unleashed it exactly when she needed it most. Love Yvie’s look but we agreed with Michelle that the wig was weird. Silky is whatever. It’s pretty and it’s probably her most polished look, but she’s seriously one-note and we can’t agree with Ru that she has star quality. Plastique is the prettiest and she’s pleasant.

But a fairly uninspiring and un-entertaining episode of Drag Race will always have one final trick up its sleeve to redeem itself: an epic lip sync. 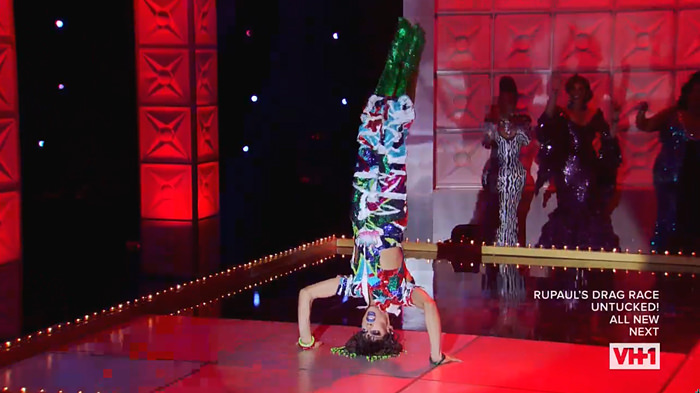 We tend to think the number of truly epic mouth-offs in the show’s history are a lot smaller than some list-generators would have you believe, but this pair of performances really was electrifying to watch as two desperate queens pulled everything they had out of themselves to stay in the game and bury the other bitch. Ru was right to keep them both in and right to point out that the rest of the queens would do well to avoid finding themselves in a lip sync battle with either of them. It’s true that this crop of queens is rough and unpolished in comparison to other recent seasons, but it also means these bitches are hungry for it – and that can produce some absolutely magical moments of drag.