“Homecoming” and “Ben Is Back” actress Julia Roberts covers the November 2018 issue of Harper’s Bazaar magazine photographed by Alexi Lubomirski. 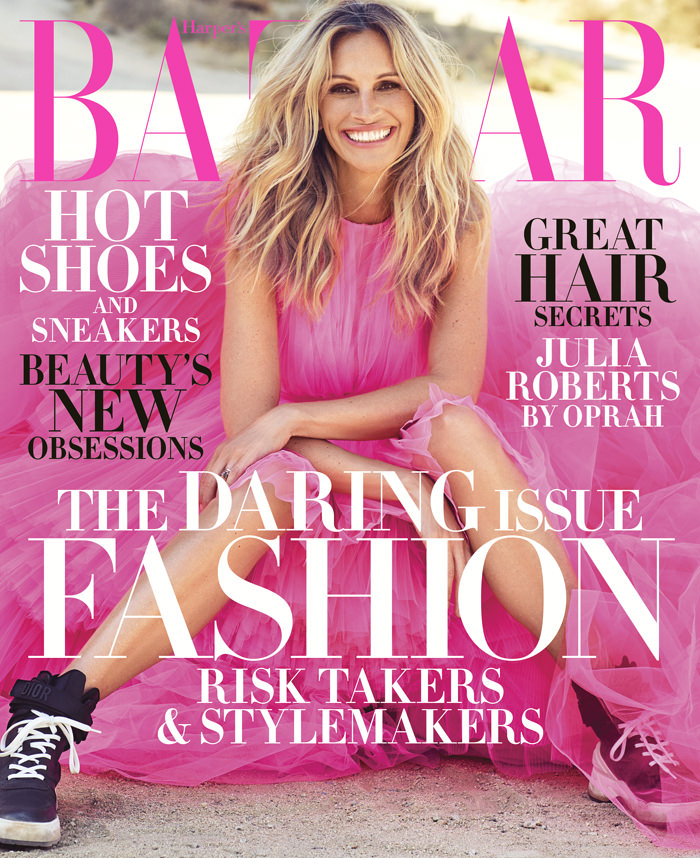 Oprah Winfrey: “The theme of Harper’s Bazaar this month is daring, and so you actually decided that you were going to do something daring because you’re afraid of heights. That’s what I heard. Is that correct?”

Julia Roberts: “I am afraid of heights and it’s funny because I’ve always been afraid of heights… Of course [Harper’s BAZAAR wasn’t] going to put me in incredible peril, and we did things that were just high enough and just scary enough where I could still smile and throw my gown up into the air.”

OW: “Do you remember when your kids finally first realized that you were Julia Roberts, America’s beloved-sweetheart actress, Academy Award winner?”

Julia Roberts: “I don’t think they will ever have a true sense of that. I think I told you once when they were starting to figure it out, it was like, “You’re famous?” And I said, “I think a lot of people might have seen the movie that I’m in or might know who I am.” Maybe an hour goes by. “Are you more famous than Taylor Swift?””

OW: “Stedman and I lived in the tabloids for so many years, and it was hard on his family members and some of my family members, and I couldn’t imagine if we had children and every other week there’s some story about him leaving me, me getting dumped, or me leaving him. I know you have experienced this very thing. Are you able to keep that away from your kids?”

JR: “For the most part. Sometimes we are in the grocery store and I won’t even know something is out, but we’ll see a tabloid and we’ll all be standing there like, “Oh, that’s uncomfortable. This is really uncomfortable.” It can still hurt my feelings, because I’m so proud of my marriage. We just celebrated being married for 16 years this Fourth of July, and there’s so much happiness wrapped up in what we’ve found together. What I like is when they write, “the $150 million divorce,” and then a week later a different tabloid says, “the $275 million divorce.” I’m like, “Well, somebody got a paycheck in the last week. This is getting good.””

OW: “Okay, I never thought I’d see the day Julia Roberts is on Instagram. You posted for the very first time in June. What made you decide to do it?”

JR: “Well, a few things. I think one of the things, obviously my kids were asking about it. “Why don’t you do that? That’d be cool.” … It’s definitely a balancing act, and it’s been tricky figuring out what to post because I am private, but I am also friendly… Although something did happen recently on my niece Emma [Roberts]’s Instagram that I think taught me a lot about what it’s like being a young person in today’s society. One weekend morning Emma slept over, and we got up and were having tea and playing cards and having this beautiful morning, and then a couple of days later she posted a picture of us. And the number of people who felt absolutely required to talk about how terrible I looked in the picture—that I’m not aging well, that I look like a man, why would she even post a picture like this when I look that terrible! And I was amazed at how that made me feel. I’m a 50-year-old woman and I know who I am, and still my feelings got hurt. I was sad that people couldn’t see the point of it, the sweetness of it, the absolute shining joy of that photo. I thought, “What if I was 15?””

OW: “Now we’re halfway into this administration’s term in the White House, and Hollywood is still grappling with the Harvey Weinstein scandal. What kind of impact has this time in our culture had on you?”

JR: “I think it’s impossible not to be affected by it. When Donald Trump was elected, my daughter, Hazel, came down and the TV was on, and it said on the crawl at the bottom, Trump wins, and she kind of gasped because of course we all had this collective hope that something else was going to happen. And what I saw in that exact moment was the complete need for me as a parent to find a way to make her feel that she could still have a voice. That’s why we went to the first Women’s March in Washington—I wanted her to feel like she still had a place in the world, that she could still believe in what she believed in, even though someone else was now president. It was very powerful for me to have her in a way be my leader into this space of marching and participating in being a citizen of this country.”

OW: “Hollywood has always placed this premium on being the youngest and freshest thing out there, but you are aging effortlessly. It just looks like your smile got brighter, and you’re just beginning your 50s. I remember when Maya Angelou told me, “Your 50s are all that you were meant to be. It’s everything that you’d been meaning to do and meaning to be.” Have you found that to be true?”

JR: “Yeah. I would say that my 50s are off to a good start. Before my birthday last year, Danny goes, “What should we do for your 50th?” And I said, “How about this? We have five days away with zero contact with the outside world.” That was 50, and it was so beautiful and wonderful. It was just the two of us, and there was a point where I thought, “Gosh, this is kind of weird.” Not being all together with the kids, the five of us, for my birthday. I was kind of like, “Huh. Maybe I didn’t think this all the way through.” And on the day of my birthday, we drove to a city we’ve been before. I was like, “This is a great town. We’ll do some shopping. We’ll eat some good food. This is going to be great.” And the kids all had soccer games, and other parents had been texting me scores of games and stuff like that, so I knew when all their games were over that they’d call us and we’d talk to them on my birthday. We went into this surf shop, and I go to the bathroom in the back of the store, and I come out and Danny’s standing there holding a surfboard, and he goes, “What do you think of this one?” I said, “That’s a big board. What is that for?” He moves it, and all three kids are standing behind it. I could burst into tears thinking about it. They had tricked me so completely. There was no soccer game. Even these friends of ours who were texting me scores of games, everybody was in on it, and it was so incredible and beautiful. That’s what getting older is about—it’s about turning even more into the person your loved ones know you to be… That was turning 50 for me. It was pretty spectacular.” Previous post:
“First Man” Explores Heroism and Mid-Century Masculinity, Getting Only One Part Right Next Post:
Katy Perry in Galia Lahav at QVC’s “FFANY Shoes On Sale” Gala – Time For Some Truth Bombs