Toronto International Film Festival: Bradley Cooper and Lady Gaga Get Married at the “A Star Is Born” Screening We realize everyone’s gushing over the film and gagging on Gaga’s drag (not to mention her exquisitely rendered soundbites), but we find ourselves oddly distracted by how this poledance is not being received. Look at that image. In 80 years of premiere red carpet publicity stunts, we don’t think any two co-stars have ever been so blatantly mercenary as to mimic a wedding on the red carpet. Is this going to be a thing that plays out for all the premieres? He slips a ring on her finger in L.A., they kiss in New York and she throws her bouquet in London?

But honestly, we’re just the two bitches on the sideline being all bitchy about it. This may look to us like a level of PR image manipulation that’s a little breathtaking in its blatantness and audacity, but Gaga (and to a far lesser extent Cooper, because this clearly has her fingerprints all over it) correctly figured the answer to the question “Can we get away with this?” was a clear “Of course. They’ll eat it up.”

Absolutely none of this should be taken as a criticism on our parts. If anything, we’re deeply impressed by how well she seems to know her own image and how people would react to this. 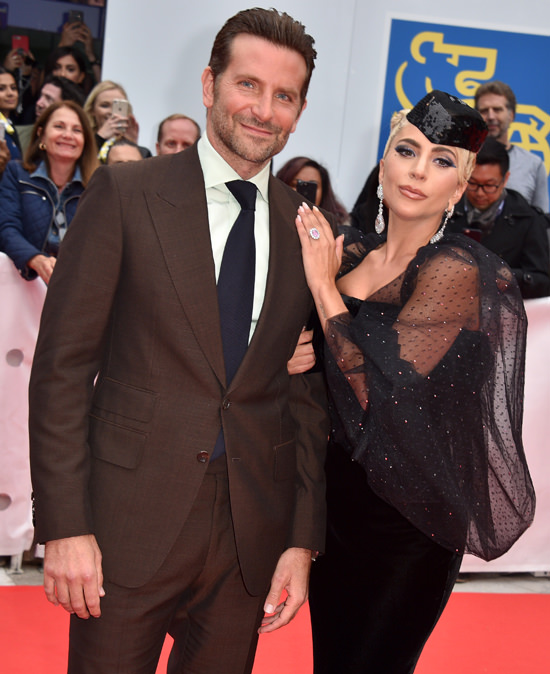 We still think the hand-holding all the time is a little weird. Neither of these two are so delicate or new at this that they can’t face a wall of cameras without someone to hold onto.

Having said all that bitchy nonsense, Steffi looks amazing, of course. All things considered, it’s among the more conventional of her red carpet choices, but the exuberant puffiness of those sleeves paired with the sleek and unexpected hat (something we’d love to see more of on the RC) raises the drama level considerably. Gaga’s all about playing the beautiful swan to her army of little monsters, even now. It’s why even her conventional style choices have such a dramatic and performative quality to them. Unlike Madonna (to pull an example out of thin air), her drag-level style choices aren’t meant to be seen as self-aggrandizing (“Look at how incredibly fabulous I am”) as they are meant to act as a form of representation to her ardent fanbase (“Look at how incredible your love has made me”). And it happens to be a particularly apt approach for this film, which is all about a love story that transforms a nobody into a star. She plays this game on a lot of levels, which makes her well-suited and prepared to become a major movie star if she wants to. The brown and pistachio color combination is pretty bold. We think it could work, but it really needed a better tie than that to pull the colors together and someone should’ve told him that a brown suit is going to require a level of meticulousness to pull off in front of cameras. In other words, button your damn jacket, mister. 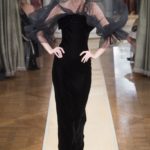