The “Boy Erased” Trailer with Nicole Kidman, Russell Crowe and Lucas Hedges is Making Us All Watery Suddenly this site has become T Lo’s Look at Upcoming Movies, but what can we say? Whatever grabs our attention tends to wind up as content and this one definitely grabbed our attention. It’s not just the killer cast of Australians playing middle Americans or Lucas Hedges offering another sensitive and heartbreaking take on the closeted gay teen (it’s to his credit that he doesn’t shy away from playing this kind of role more than once in his relatively young career) that caught our eye here. It’s the timeliness of the story, the way it attempts to bridge a divide and the possibility that could it literally save some kids’ lives:

That looks amazing, to be perfectly honest. We’re gonna need a box of tissues with our popcorn, we can tell.

Also: Nicole’s hair should get an Oscar nomination: 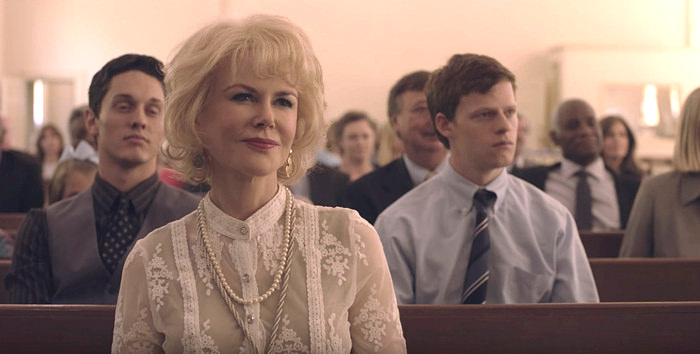 Oof. This is going to be rough to sit through, but we wouldn’t miss it.

“Boy Erased” tells the story of Jared (Lucas Hedges), the son of a Baptist pastor in a small American town, who is outed to his parents (Nicole Kidman and Russell Crowe) at age 19. Jared is faced with an ultimatum: attend a gay conversion therapy program – or be permanently exiled and shunned by his family, friends, and faith. “Boy Erased” is the true story of one young man’s struggle to find himself while being forced to question every aspect of his identity.