Home » Fashion » Style File: Sam Heughan Out and About in...

Style File: Sam Heughan Out and About in NYC Look, Outlander fans! It’s that dreamy Sam Heughan fellow! Let’s all take a much closer look at what he’s wearing, because your ol’ pals T Lo are about to be their usual nitpicky-ass selves! Okay, first and most obvious: that suit doesn’t fit, which is occasionally an issue with him. There are plenty of boystars who hit the weights as hard or harder than he does and they still manage to get their suits cut to fit their swole proportions.

Second, we always feel like his poledance ensembles smack of preciousness. The tucked shades are a bit much and the overall feel of the look isn’t quite so well suited to him as it was for, say, Jonathan Rhys Meyers last week. Like so many of his promo looks, it just doesn’t feel like it’s something he wants to wear. His public style always seems a little forced to us. 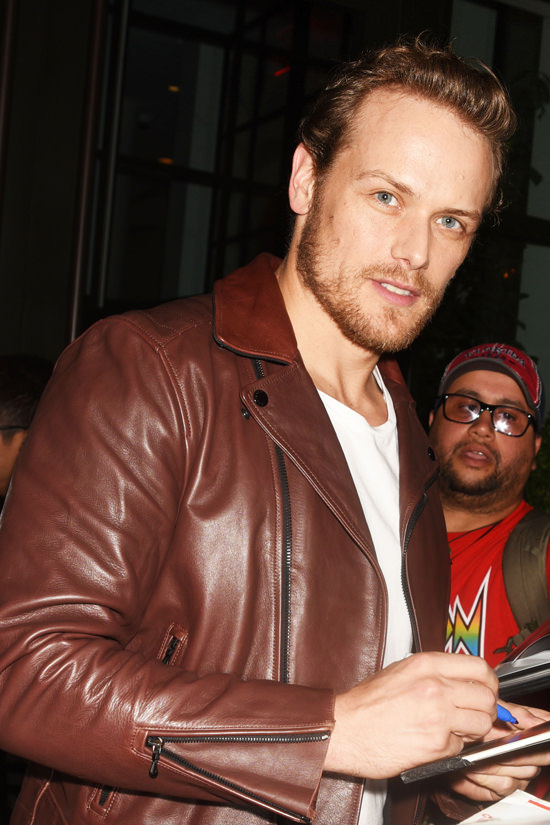 He’s infinitely better at the casual looks, but even then there’s usually a sense of … we don’t know… display about them, we suppose. Obviously we don’t know the guy, but we sense he’s someone deeply uncomfortable being seen as a sex symbol and a bit unsure of how to navigate that persona in a way that feels true to him. That’s just us reading the tea leaves, darlings.