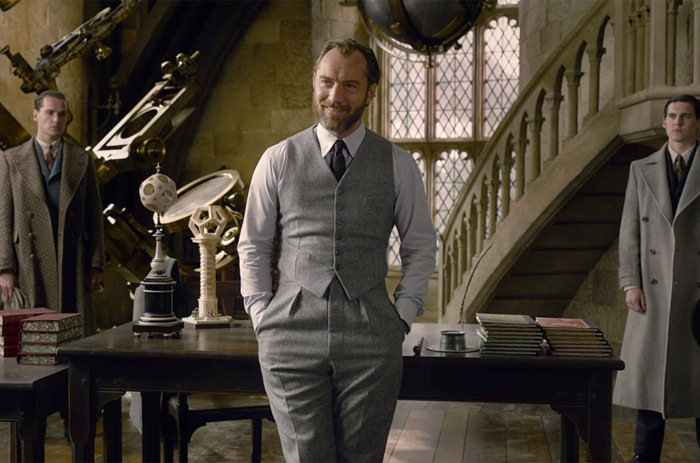 We’re not exactly Potterheads and believe it or not, we don’t really get all that worked up over questions of whether gay actors should be playing gay characters and/or whether or not white gay male characters need more representation in our entertainment (when so many other shades of the LGBT rainbow remain almost completely invisible in mass media), but Jude Law said a thing and now we’re kind of annoyed by it.

The thing said by Jude (to Entertainment Weekly):

There was some uproar earlier this year when director David Yates told EW the character not “explicitly gay” in this film. What’s your take on how apparent Dumbledore’s sexuality should be?
Jo Rowling revealed some years back that Dumbledore was gay. That was a question I actually asked Jo and she said, yes, he’s gay. But as with humans, your sexuality doesn’t necessarily define you; he’s multifaceted. I suppose the question is: How is Dumbledore’s sexuality depicted in this film? What you got to remember this is only the second Fantastic Beasts film in a series and what’s brilliant about Jo’s writing is how she reveals her characters, peels them to the heart over time. You’re just getting to know Albus in this film, and there’s obviously a lot more to come. We learn a little about his past in the beginning of this film, and characters and their relationships will unfold naturally which I’m excited to reveal. But we’re not going to reveal everything all at once. 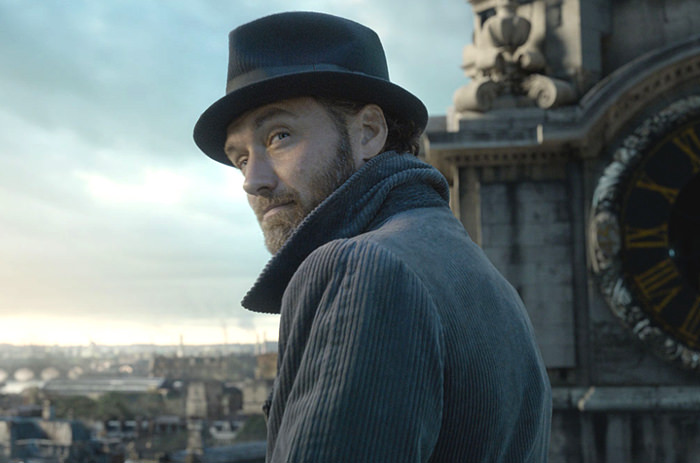 Mmm. Very interesting, Jude Law. Here’s our rebuttal: Fuck all that nonsense. It’s 2018, this is the NINTH film featuring this character, who is now on his THIRD portrayal by an actor. Calling for patience on the depiction of a fundamental aspect of his character is more than a little silly at this point.

While there is no aspect of our lives that hinges on whether or not Albus Dumbledore gets a kissing scene with a boy or whatever, we find this sort of coyness on the existence of gay people in 2018 to be infuriating and offensive. While it’s very true that one’s sexuality doesn’t necessarily define a person, a heterosexual actor should seriously reconsider saying such a thing to his LGBT critics, many of whom have been defined entirely by their sexuality or gender identity, very much against their wills by a society and a culture that seeks to ignore their existence when they’re not attacking it.

Dumbledore is, by definition, a side character. None of the many films in which he has appeared have been strictly about him. We’re sure there’s some aspect of Potter fandom calling for him to get his own spotlight moment, but that’s not the issue here as we see it. While he’s never been the main hero of the story, nor do we think he ever really needs to be, there’s no denying his popularity among a very ardent fandom as well as his centrality to the mythos J.K. Rowling created with her Harry Potter books. And his sexual/romantic relationship with Grindelwald – THE TITLE CHARACTER OF THIS FILM – is significant to the overall mythos as well as the character himself. There is no real excuse for avoiding it or playing coy about it, except for a clearly corporate-driven squeamishness about the reality of gay people existing. We honestly don’t feel strongly enough about this rather disastrously publicized film to call for a boycott or anything like that. But Warner’s reluctance to acknowledge the realities of LGBT existence, along with J.K. Rowling’s complicity in that reluctance, Jude Law’s tone-deafness and the P.R. team’s clear incompetence leave us completely disinterested in supporting it. It’s 2018, you mooks. Wake the fuck up.

We’re here, we’re queer, we don’t have time for your fucking nonsense, dear.