YAAAAS, KWEEEEN: Meghan Markle Goes on Tour with Her New Grandmother-in-Law, The Queen

The Queen and the Duchess of Sussex depart the Royal train for a day of appearances together, starting with the Mersey Gateway Bridge opening. You know you’re hardcore stanning for Duchess Megs when you realize you’re actually spending time thinking thoughts like “Goodness, Megan is spending the night with the Queen on the Royal train. I hope there’s someone with her to calm her nerves,” and wondering if she waited until Betty fell asleep to continue bingeing The Crown on her phone. Who knows? Maybe they spent all night doing their nails together and having girl talk. It could happen. 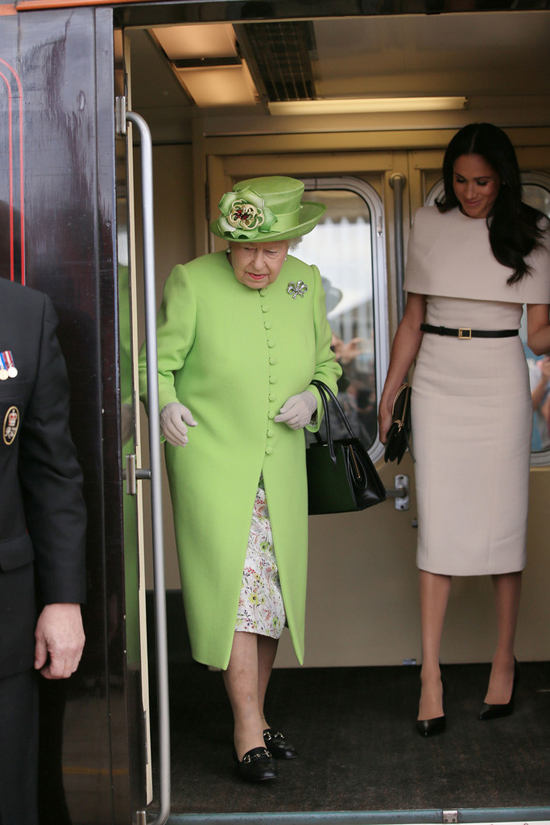 As for her style choices, the message is being sent loud, clear, and with extreme consistency: There will be no surprises here. For her third post-wedding appearance in a row, she’s sporting a neutral look with minimal details. Just as Cathy made blue coat dresses her go-to image, Megs is clearly staking a claim to beige day dresses. We suppose it makes sense in a lot of ways. First, because The Queen herself loves bold colors and Meghan will never want to be seen as fighting for the spotlight with her. Second, as we noted, the lady’s got a lot of eyes on her, just waiting for her to screw up. Neutral minimalism is a smart, if slightly dull way to silence any potential critics. The very last thing she wants is for people to claim she’s showy or doesn’t understand how to comport herself – the two criticisms most likely to be applied to her. It’s a fine look. We don’t love the cape element, but the dress would be way too generic without it. We hope she gives herself some room to loosen up and wear a print, a color, or even something that’s not Givenchy soon.

Previous post:
Jane Krakowski in David Koma at the 2018 Fragrance Foundation Awards Next Post:
Cate Blanchett Lands on The Ground in Louis Vuitton at the “Ocean’s 8” London Premiere