“Solo: A Star Wars Story” is Determined to Make Its Point 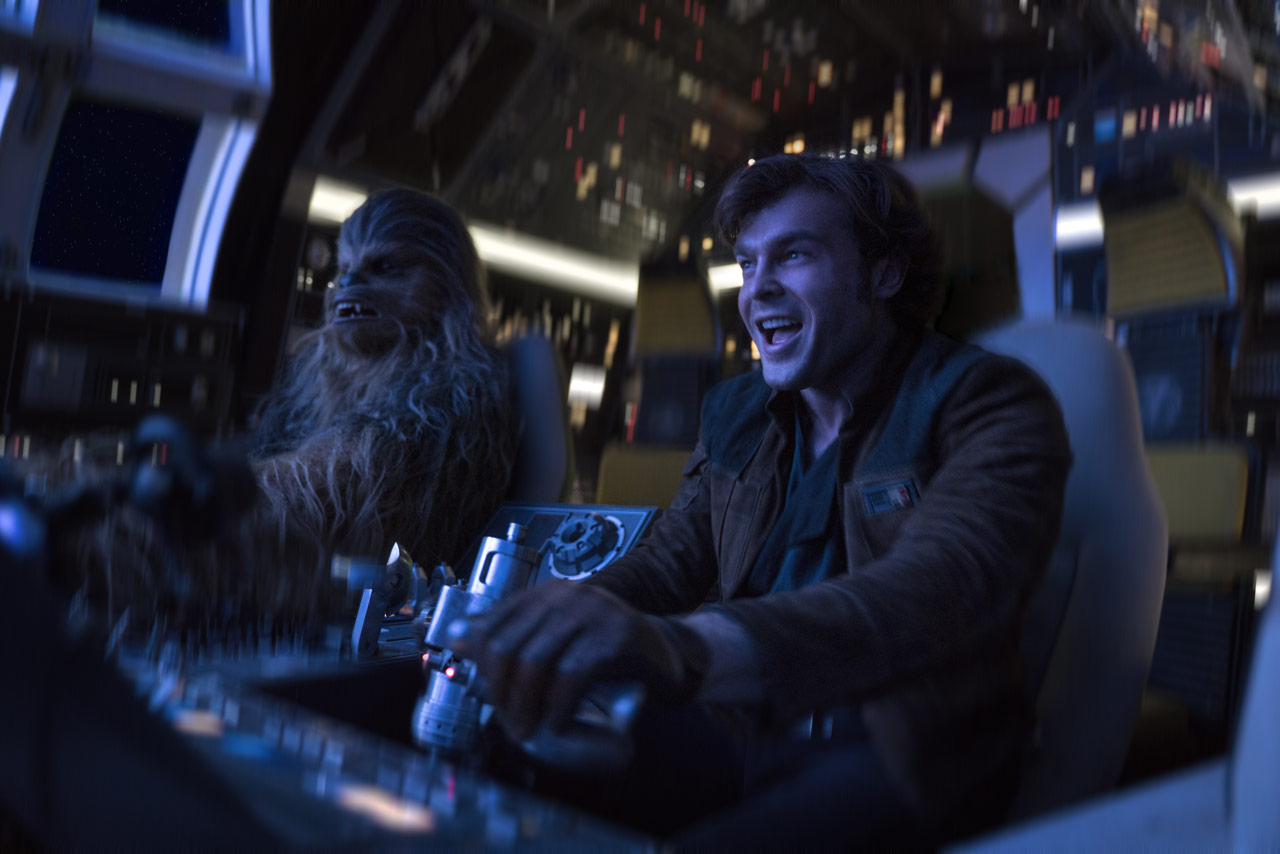 Solo: A Star Wars Story is a dark movie. Not necessarily in tone, although it occasionally suffers from a disappointing lack of humor for stretches at a time. No, it’s literally dark, in the sense that you sometimes can’t see what’s going on. Roughly 70 percent of the film takes place in overcast, underlit industrial settings, which makes sense for the characters and the type of story being told, but tends to force the audience to work a little just to keep track of what’s going on. It’s a grim and determined sort of stylistic choice that tends to embody the film’s entire approach, both narratively and aesthetically. In this way and a whole lot of others, Solo: A Star Wars Story is like one of those endlessly repeating fractal images. Every part of it tends to act as a summation of the whole endeavor. From the over-explanatory name to the narrative and stylistic choices, to the constant use of the franchise’s iconography, to the performances of the leads, it feels like each creative decision was made in order to drive home the point that yes, this sure is a Star Wars movie alright. It’s the first live action film in the franchise without a Skywalker family member anywhere to be found and at times it feels like the production gets a little defensive about that, as if it’s trying to prove to itself as much as the audience that this was a story worth telling and more importantly, one that lives up to the Star Wars name.

Despite the critical tone of the above paragraph, we can attest that this feels very much like a slightly louder, slightly harder-to-see Star Wars movie and even a fairly entertaining story in its own right; populated by easily parsed and entertaining characters making their way through an array of (dim) backgrounds and settings, chasing the latest McGuffin. There are fantastic set pieces, moments of romance and high drama, evil dudes in black capes, quippy side characters, and (going hand-in-hand with that last bit) poignant death scenes.  It’s a brisk-moving adventure story and if that’s what you’re looking for, then you’ll feel your ticket money was well spent. Ron Howard has a well-deserved reputation for being a workmanlike director who understands the mechanics of filmmaking and the psychology of the audience. He famously took over this production after the original directors were fired from it and he delivered a fully realized, well-executed Star Wars film in exactly the manner the producers and we suspect a good portion of the SW fandom wants. You’re sensing a “but” here, we know. We’re working our way through.

The energy is high and the pace is frenetic from the jump. It’s a car chase movie, a war movie, a monster movie and a heist movie all in its first 15 minutes. This isn’t so much “Star Wars on steroids” as it is “Star Wars on speed.”  In retrospect, this cycling through genres makes sense for the history of the character, one of the premiere manly rogue types in all of film history, but it might have been to the film’s benefit if that cycling  had been slowed down and given some time to breathe.

Once it settles on the heist genre, it sticks with it all the way to the end. And since the fates of several characters are written in stone, it’s not hard to see how the heist is going to shake out and who’s going to survive it. There’s an inherent loss of tension in any scene where it looks like Han and Chewie may never see each other again or the Millennium Falcon looks to be on the brink of destruction. Spoiler: They will and it’s not.

Having said that, it moves briskly and confidently, betraying very little of the infamous creative shuffling that went on behind the scenes. There’s a much better sense of world-building and character defining than the most recent of the midquels (a segment falling between the prequels and the sequels – and don’t look at us like that; we didn’t make up the word) Rogue One, which was ambitious and exhilarating, but full of characters whose names never even registered. A Star Wars film needs to adhere to rather conventional storytelling techniques in order for it to work, which is why someone like Ron Howard makes such a perfect choice for director and why his work paid off fairly well here. Everyone in the cast is good, but it almost felt like they were handed roles they could play in their sleep, from Woody Harrelson as the sleazy but charming rogue, to Paul Bettany as the officious eeeeeevil guy, to Emilia Clarke, who gets to look imperious while wearing a lot of capes. The two performances most people are going to care about are Alden Ehrenreich as Han and Donald Glover filling out Billy Dee Williams’ cape as Lando. Glover is more or less perfect in the role, straddling the same line that Ewan McGregor did when filling in Alec Guiness’s shoes for the prequels: part aural mimicry and part personal spin on the character. While Lando’s purported pansexuality doesn’t really make its presence known in this film, he still imbues him with the exact right kind of languorous confidence that pays homage to Williams’ performance without ripping it off outright. In other words, you believe he’s Lando Calrissian.

As for Ehrenreich, who clearly had the harder job, he’s more than up to the task of playing a charming thief and fast-talking rogue. It’s just that he’s not really giving you any reason to be reminded of Harrison Ford’s iconic performance. You’ll definitely find spare glances of Ford buried somewhere in Ehrenreich’s sometimes too-earnest performance, but we’re not sure the film would have been improved by strict impersonation either. Which may explain why Howard and the screenwriters felt the need to remind you over and over again that this really, truly is Han Solo, you guys. Dice, blaster, Chewie by his side – the whole nine yards.

Despite the successful attempts at charm or humor, the characters all exist in a dreary and ugly universe. Which is a shame, because the best bits of Star Wars managed to juxtapose the oppression of authority with the wonder of fantasy. It’s all oppression, all the time in this film. That sort of grimness worked for Rogue One (especially given its ending), but Han, Chewie and Lando are some of the most beloved, charming and fun-loving characters in the entire franchise. The entire point of those characters was that they weren’t weighed down by Jedi or Skywalker family melodrama. While we’d never have wanted or expected some sort of lighthearted romp, the three iconic characters at the heart of this film are better situated to tell a more comedic Star Wars story than the grim tale of oppression and betrayal we wound up getting. There’s this sense that all of this could have worked just fine as a generic sci-fi space heist film without ever referencing Star Wars at all, which forces the question of whether it’s worth it to expand a universe to the point that it loses the very things that made it a unique and interesting place to visit in the first place – or worse, if they’re reduced to nothing more than a list of references to be checked off. Still, it tries to be a movie that stands on its own while also slotting itself into an existing franchise and simultaneously providing a checklist of continuity and canon points for fandom to obsess over. And for making that attempt, it should probably be paid a little respect, especially since it mostly succeeds. It is a rollicking, action-filled space adventure full of rogues and monsters, evil-doers and femme fatales, space ships and robots. A bit grimly set in its jaw, but entertaining.