Met Gala 2018 Trend Watch: Get Thee to The Nunnery We won’t lie to you, darlings. There are so many Met Gala looks to get through that we’re kind of arbitrarily imposing themes on them just to group enough of them together for a post. We’re only saying that because we don’t want to belabor the joking title of this one. While a few of these looks have a distinctly ecclesiastic or nun-like quality, they’re mostly just a bunch of mostly black looks with a bit of Met Gala drama to them. We’re kicking off with something rather clearly modeled on priest-wear. Given how badly Louis Vuitton has treated her in the past, we’re pleasantly surprised by how distinctly chic this is. The leather gloves strike us as a bit much, although the look would be missing something if she ditched them. She looks like some sort of cleric in the Star Wars universe, which is really all we need to consider here. It’s bold, weird, grand and dark. It’s honestly a bit more than we expected to get from her.

Greta Gerwig in The Row Another one who didn’t shy away from a clear and obvious inspiration. This references everything from nun’s robes to Puritan-wear, lightly encompassing a broad range of austere Christian styles. We love it. It takes some boldness to wear something like this. We just wish the head styling had the same sense of severity to it. She’s too softly made up, we think. Trust Miss Laura to wear a big ol’ ankh to this one. Still, without belaboring the point, we like the priestessy vibe of this one, even if it comes off a bit low-key for the venue. Also, the necklace just doesn’t go at all. Ruth, we love ya, but this is just okay. 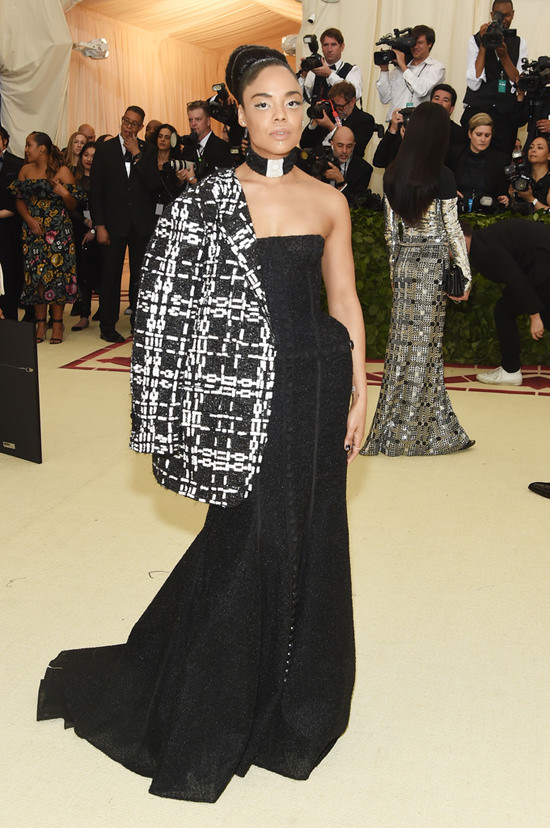 If you took away all the styling choices, including the hang-a-jacket-off-one-shoulder one, you’d be left with a fairly basic black dress. Still, we can’t fault her and her team of styling this one up for maximum drama. The clerical collar choker is a nice, if slightly obvious touch, but we’re not convinced on that jacket and the drag queen makeup seems a bit overdone for the look. We’re not sure the white train truly works behind the black pants, but there’s a lot here to like. The style seems perfect for her; a sort of formal activewear feel. And it’s got a sense of drama to it that doesn’t ask her to step outside her comfort zone.