Ironically, some of the most colorful and stylish looks of the royal wedding didn’t come from the celebrity side of the aisle but from members of the families, several of whom took this moment to wear a bold color or a bold print or even a diamond stud in her nose. The mother of the bride showed up sporting locs, a nose stud, and one of the most elegant looks in the church. The green and white color scheme looks great on her and helped her stand out just a little.

Prince William and Catherine, Duchess of Cambridge (in Alexander McQueen) Mrs. Cathy is recycling this McQueen coat, which she has worn on several occasions, including Princess Charlotte’s christening. And why not? It gets the job done for her, looks great on her, and leaves her free from any criticisms of being ostentatious. Duchess knows what she’s doing. Princess Diana’s niece clearly had no intention of fading into the background today. Aside from the bride’s, this may have been the most discussed dress on social media this morning. What a gorgeous color and print. It’s a bit attention-seeking on her part, but when the results are this good, we can’t complain.

Pippa Middleton (in The Fold) and James Middleton 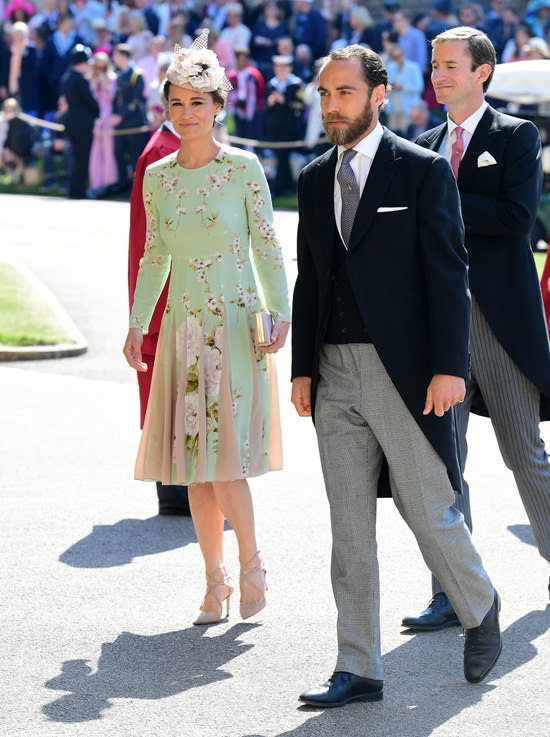 Her dress is great until you get to those dingy-looking pleats.

Prince Charles, Prince of Wales and Camilla, Duchess of Cornwall This all seems to be very much in Chuck-and-Cammy order. He brought a little color to his shirt and tie, but we don’t think it works. She always struck us as having the most self-consciously “royal” sort of style out of everyone in the family. She looks like she’s costumed for a part. It works for her, we suppose, but it never comes off stylish to us, even if the pieces are nice. We thought this made for a surprisingly bold choice for her. Very disappointed by the Princesses’ lack of jaw-dropping hats. Can’t say we love Eugenie’s Jackie Kennedy cosplay. It doesn’t suit her. Beatrice’s dress is a bit heavy-looking, but the color is beautiful. LOVED seeing Betty get her neon action on. The hints of purple in the ensemble looked great on her and, as always, kept her a focal point in any crowd. It’s not bad. It feels a bit like an “on my best behavior” sort of look, but that could be us reading too much into it.