Darlings, we’re the types of magnanimous, fair-minded and humble bitches who have no problem admitting that they got one wrong. For the last six months, we’ve been predicting the end of the HillarySuit, figuring the zeitgeist was forcing us all to move on, but you ladies just keep on proving us wrong on this one. 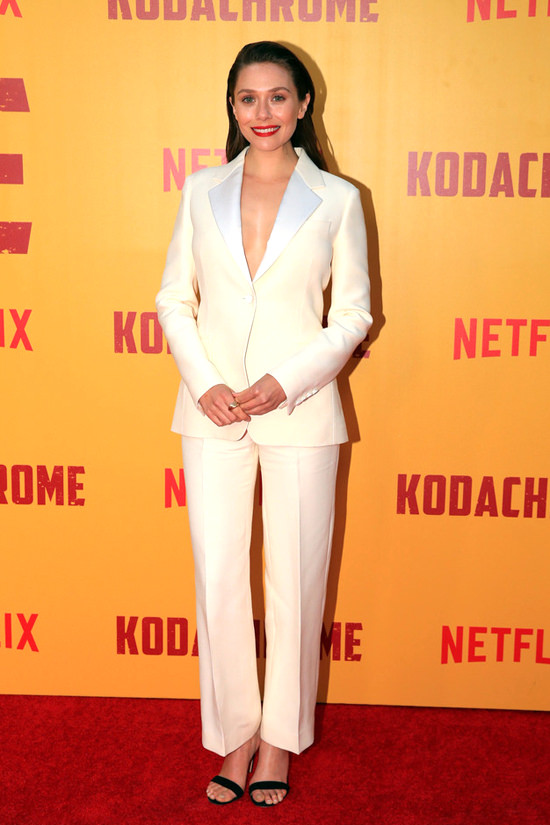 We still think the trend is eventually going to move toward different interpretations of the classic pantsuit, including more mixing and matching of patterns and colors, not to mention more variations in shape. But what was once considered a slightly dowdy style – the straight up-and-down, monochromatic woman’s suit – is currently working a “classic chic” status that has no intention of dying down.

We’ve seen literally dozens of plain white pantsuits on the red carpet in the last two years. When a look becomes that ubiquitous, you stop seeing it on the bigger stars or more press-heavy events. She’s a week away from a Disney-fueled Avengers explosion and she’s still working this look, which gives you some idea of how much the celebrity ladyset seems to love it.

And to be fair, if 75% of male stars can get away with wearing the same black/gray/blue business suit, we suppose it’s only fair the women get to settle on their own version. The Little Black Dress may just have to step aside for the Basic White Suit as the red carpet go-to.