She also gave one of the greatest concert performances of AT LEAST the last decade, so she’s got that going for her too, but we, being the fashion bitches we are, were all about the Balmain WERQing going on simultaneous with her slayage.

Also: We just would like to put it on the record that we wrote the title “Bey Came to Coachella to Slay” roughly two dozen times before deleting it each time. We knew it was a tired line, but the temptation was just so strong, kittens. We suppose we could’ve just taken it further by rhyming it with “cliche” somehow. We are bowing down, Space Nefertiti. Teach us your wisdom.

There is nothing about this that isn’t perfect from a stagewear or branding perspective. We’d argue it’s also pretty close to perfect from a design perspective as well. Every detail – colors, textures, embellishments – is balanced beautifully by the others. No single element overwhelms the look, nor does it collapse into a indistinct, visually muddy mass. It sells an image that’s so pure and direct, you don’t need more than an instant to clap onto it, but it pays off further, the longer you look at it.

Beyonce likes to fine-tune every detail of her onstage look because she knows her intense fandom will spend time decoding it down to the last stitch. In other words, she dresses for a social media-rich culture when she performs. She reportedly CHANGED HER NAILS MID-PERFORMANCE. She knows her fandom will discover that kind of detail, discuss it, decode it, and ultimately conclude that she did it just for them; a secret detail she didn’t have to do but did it anyway, specifically for the people who will zero in on that sort of thing. All the details of her looks here, but especially this one, demonstrate that same kind of thinking. It’s a form of spectacle that she has rather brilliantly recast as a series of highly personal messages to the faithful. 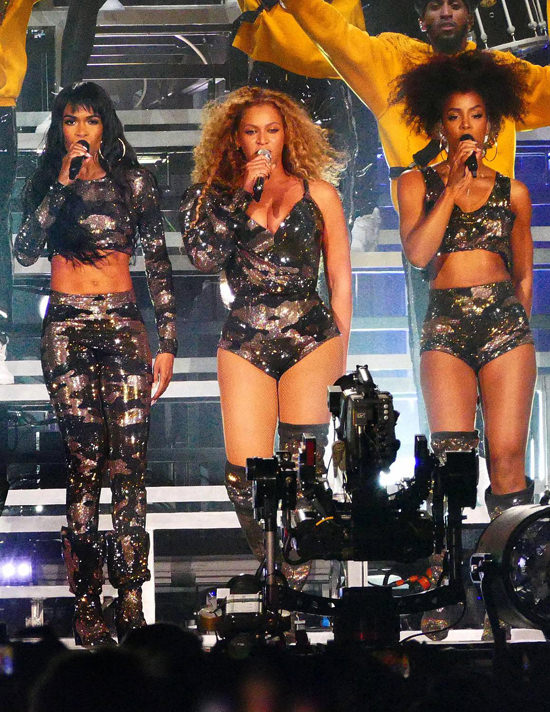 Which isn’t to say that every costume here is riddled with hidden messages or complexity. Sometimes, you just wanna hook up with your girls and remind everyone that the three of you kick ass, sound great, and remain hot as hell. Sequined camo just makes good damn sense in this instance. Sometimes her parade of bodysuits can get a little repetitive. And in a lot of ways, this look borders on being Generically Bey in that sexy/militaristic way she does things now and then. It’s a fine look, but we really like it with the jacket, for offering a slightly different onstage silhouette for her. Interspersed with the ever-present royalty and militaristic themes, she adopted a strong set of visual references to HBCUs and black college life and culture. One of the things that fascinates us about how she presents herself visually is that she can routinely step onstage in garters, thigh-highs, fishnets, and patent-leather bodysuits, but there will always be a set of details that elevates the look beyond the usual fetish gear-inspired pop diva costume design. Putting a visual that evokes education, pride, and self-worth in the center of what would otherwise come off as fetish gear is bold; not just because it works, but because people don’t even notice the juxtaposition. In the end, she basically put on a pep rally for black people, which was a gloriously defiant and fabulous way to encode her set, the first headlining black woman at Coachella. We would not claim the type of knowledge or experience to decode everything Beyonce does from a racial perspective, but there truly is something beautiful and admirable about the way she makes her intense stardom about the communities to which she belongs.