Oscars 2018: The Ryan Seacrest Debacle Was the Perfect Capper to This Season of Red Carpetry 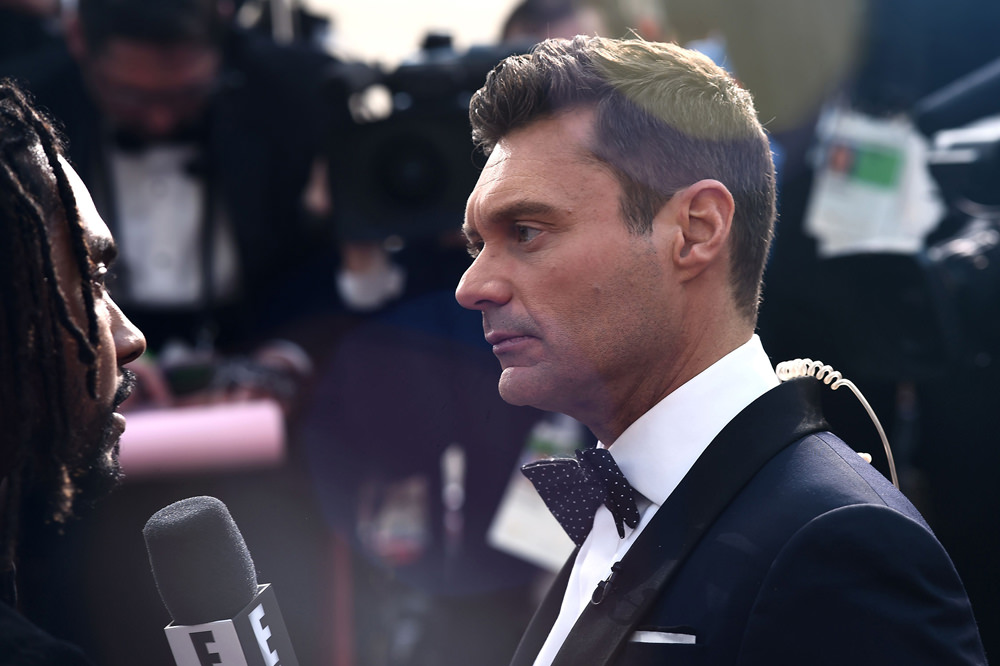 For as long as we’ve been doing red carpet coverage – over ten years now – E! and its awards season live red carpet was without question the most important tool we had in order to assess and discuss red carpet looks in real time. While ABC likes to give its Oscars red carpet hosts a lot of space and time to chat with the attendees, the fact of the matter is that E! – and specifically Ryan Seacrest – were always the best places to go if you wanted as many full-body shots of the stars, as well as real-time reporting on what they’re wearing. ABC staffs its pre-show with morning chat show people or people who simply don’t know how to do an interview on the fly while surrounded by a screaming mass of people at the most-watched Hollywood event of the year. They tend to get so flustered that you’d think they were all struggling to remember who they were talking to. Seacrest, for all the jokes and complaints folks make about him, always had  a smoothness with everyone born out of decades of developing skills as a world-class schmoozer. He rarely ever asked questions that elicited fascinating answers, but he was always great about keeping things jovial, light, and briskly moving along. Judging by the fact that no one – not even the nearly as experienced Giuliana Rancic – is as good at doing live red carpet as Ryan Seacrest is, it’s fair to say that it’s a very tough job that Seacrest excels at above all others.

Let’s stop for a second and here and stipulate that no one did red carpet coverage in as entertaining a manner as the late, great Joan Rivers. Let’s also stipulate that, despite the rush in response to posts and articles like this one to declare oneself a person who doesn’t care about such things, the fact remains that lots of people do. People watch the E! red carpet coverage, and they do so religiously because they love celebrity fashion and that network has always been the best (albeit deeply imperfect) resource in real time.

But with last night’s Oscars red carpet, we watched a personality and a network do so much damage to their brand over a two-hour period that 12 hours later, we’re still asking each other, “Am I remembering this right?”

E! was going into the night rocked by some hits to its reputation; the kind of hits in this age of #MeToo and #TimesUp that they really couldn’t afford to ignore or wish away. First, E! host Catt Sadler became something of a cause célèbre for many celebrity women by standing up to the network, exposing their practice of paying male hosts more than female hosts, and resigning. Second, an E! producer claims to have been fired for allowing criticism of the network on this issue  – by actresses being interviewed live – during the Golden Globes. And most damning of all, Seacrest himself was accused of sexual harassment by a former employee of the network. There may have been no good way for E! to counter the Sadler charges and the firing of that producer before or during the Oscars red carpet, but given the ubiquity of the #TimesUp movement and how it was clearly going to shape the tenor of the night, a network accused of mistreating female employees should not have put a man accused of sexual harassment as the face of its Oscars coverage.

Now let us stop here and stipulate that no, Ryan Seacrest has not been charged with anything and yes, according to the laws of the United States, he is still innocent until proven guilty. No one here is suggesting that the men get fired or jailed based on these allegations. But something critics of Hollywood’s response to abuse allegations don’t get is this: It is an entire industry and town based on image and public relations. The very fact of the allegations against Seacrest should have been a serious factor in considering whether it was worth putting him on the air. But despite considerable negative press in the days leading up to the Oscars, E! insisted on keeping Seacrest in his usual spot and even considered putting their coverage on a 30-second delay in order to hopefully scrub any negative commentary that might spring forth from a celebrity’s mouth mid-interview.

In short, everything the network did was done to support Seacrest’s infallibility and standing, and to ignore, shunt aside, minimize and even censor any women who might have something bad to say about it. How they ever thought this was going to stand in a year when so many celebrity women found their voices on the topic of abuse, harassment and rampant sexism in the industry completely baffled us. We talked about it just beforehand and decided that Seacrest must have secured at least a few guarantees from A-listers and nominees that they would talk to him on the red carpet. Otherwise, why risk the potential disaster of standing there with your mic in your hands with no one to talk to? And why sideline your most famous female host – and second-most experienced red carpet interviewer –  Giuliana Rancic by sending her off to Siberia to stand dumbly by a hotel pool, far away from the action? Why not, at the very least, position her on the red carpet so the female attendees would have someone they’d be more comfortable talking to?

It turns out that the supremacy of powerful white men in Hollywood overrode not only the charges and allegations made against Seacrest, but also any common sense on the part of the network. People who watch and comment on this sort of thing all predicted that this would be an awkward red carpet at best, but had the potential to be a downright historic debacle. It was, to everyone’s growing horror, very much the latter. Almost every A-lister and nominee ignored Seacrest completely and he was stuck – with an increasingly frantic look on his face – chatting for long periods of time with such red carpet stars as Christopher Plummer and Donald Sutherland. All the stars basically ran right past what was once a more or less required stop on the red carpet, shunning the man who had been more or less its mayor and goodwill ambassador for years. They all rushed off to the ABC staging area, where Michael Strahan and Wendi McLendon-Covey struggled mightily with the onslaught. E! kept cutting to an increasingly confused Rancic, who literally had no material to work with because they didn’t see her as worthy enough to stand anywhere near the red carpet. The result was the worst-covered red carpet we’ve ever seen. A fitting end to the most tense and politically active awards season ever.

Bottom line: his ego and his network of friends should have been summarily ignored by the network, regardless of how powerful he is or how many hit shows he produces. The network’s attempts to silence or sideline any women while going to enormous lengths to make sure this one embattled man did not lose a centimeter of his standing left Seacrest with egg on his face and E! with some serious questions about its corporate culture.

And if we were Giuliana, we’d be fucking furious this morning. By all rights, she should have had a career-defining moment out of this mess and the network couldn’t even fathom using her as a solution to the problem.