When it comes to the Oscar Nominee Poledance and its use of fashion, the brief usually winds up being “stately, stylish, elegance.” That’s the direction virtually every actress goes in once her name is read off that list of nominees, from Anne Hathaway to Saoirse Ronan to Viola Davis. But Miss Mary didn’t make her name as an actress. No matter where else her career takes her, it seems she’ll always have that R&B Diva image to contend with. She could’ve taken this as an opportunity to switch things up in her style or do as she’s expected to do. Instead, she’s remaining true to her self and the style that got her where she is.

In other words, she’s an Oscar nominee who continues to wear her Divahood on her sleeve. Case in point: This is a Grammys dress. Not that it’s wrong for a film festival red carpet or anything. She’s just going her way and doing things as she’s always done them. In fact, if we had to compare her Oscars style to anyone, it would be Cher, who did roughly the same thing back in the day: stuck hard with her Cher image and rode it out to win the Oscar. We’re reminded of her because in a lot of ways, this looks like a Cher dress. Having said that, we’re not crazy about this one. The color doesn’t really pop and the turtleneck is bad. Those sheer panels trimmed in sparkle, given the shape of them and the weight of the fabric, were bound to get stretched out of shape and wind up looking a little cheap. 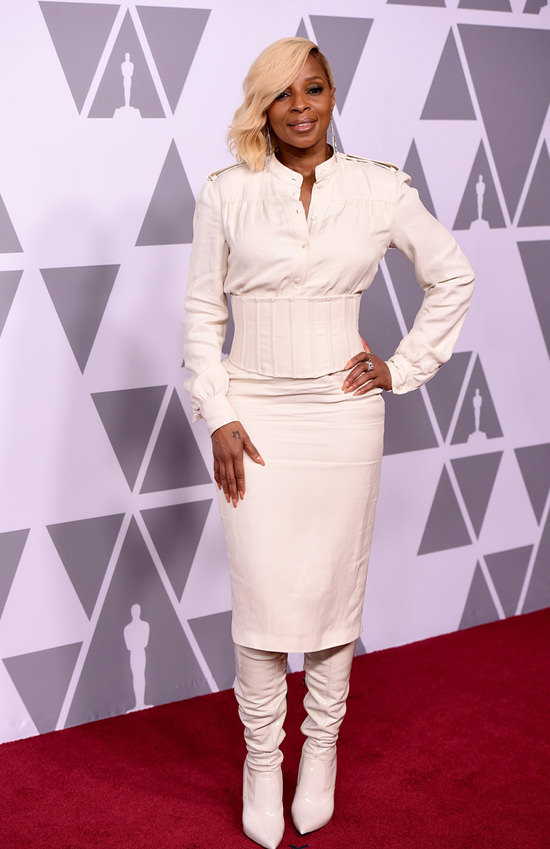 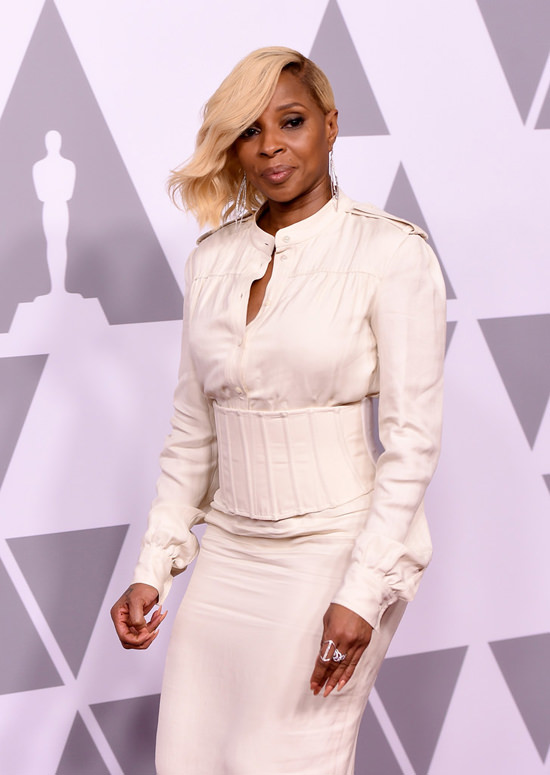 LOVE this. She always looks amazing in white, which is probably why it’s one of her most consistent style go-to’s. We think there might be a bit too much volume in the look, what with the puffy sleeves and slouchy boots, but there’s something a little Star Wars-ian about the aesthetic here that looks surprisingly good on her. Get your Rebel Princess Chic on a little more often, Mary. It works.

Previous post:
The Stars (A Few of Them, At Least) Came Out for the 2018 NFL Honors Next Post:
Style File: Elizabeth Debicki Does Springtime with a Twist, in Roksanda and Gucci, Promoting “Peter Rabbit”