Home » Fashion » Armie Hammer and Timothée Chalamet Are Confused at...

Maybe you two boys should go back to red carpet rough-housing instead of this sober, awards-season posing you’re foisting on us. 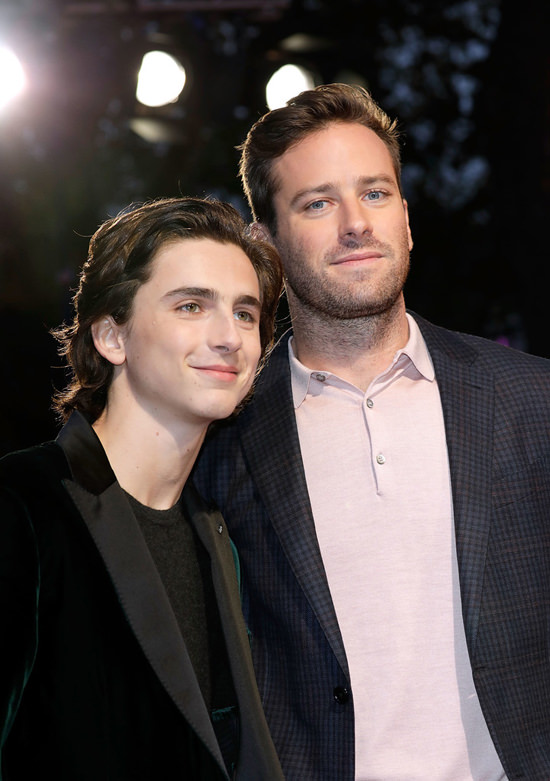 But let’s face it. That’s not the issue here. The issue here is that your outfits make no kind of damn sense at all. A blue checked sports coat, pink knit polo, brown pants and brown dress shoes? Did you hit your head or something? It’s weird, because the top half works on its own just as the bottom half does, but each half clearly doesn’t belong with the other.

And isn’t this a little under-dressed for the London premiere of your prestige drama? We think a velvet blazer and a t-shirt is a great look, so long as each piece is well chosen and matched. We’re not entirely sure it works as well with an entire velvet tuxedo, fabulous as it is. It’s too big on him, and the pairing of patent dress shoes makes the incongruity of the t-shirt stand out all the more. The effect is less youthful and edgy than it’s trying for. Like Armie’s getup, it just comes off a little confused. Conspiracy Theory: someone told them to stop acting so gay in front of photographers. Suddenly, they’re very formal and slightly awkward with each other. We don’t know that we necessarily believe that a hundred percent, but we’ll see as the poledance goes on. The actions of straight actors in high-buzz projects playing gay or queer characters has always been a bit of a fascination of ours. It’s something of a bellwether as to where LGBTs stand in the culture.