Style File: Jared Leto is in a Box and That Box is Labeled “Of Course” There was a recent accidental typing of “Jared Letgo” on our parts, and ever since, we can’t … well, let go of it. This bout of obsession on our parts has to do (of course) with Mr. Jared’s fashion choices and how very boxed-in he’s become. Between the Gucci contract and the whole Joker thing, he’s stuck in clown clothes constantly. And we think his disdain for them are starting to become apparent. Jared, it’s time to Letgo of the Gucci. This relationship has outlived its usefulness for both of you. 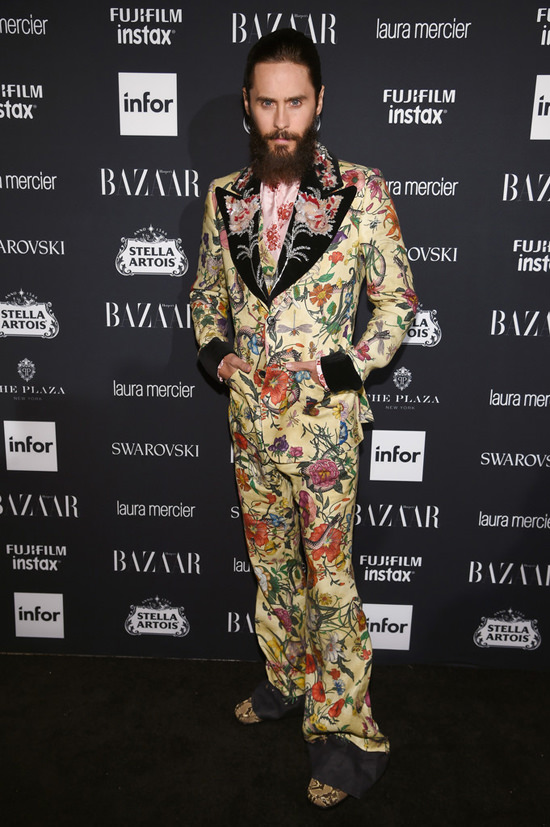 Like literally every Gucci ensemble he’s worn in the last 6 months, there are things in here that he could rock the shit out of, if they were centerpieces for other ensembles rather than just one in a series of loud, obnoxious garments fighting each other for attention.

But there’s no excusing the massive puddle of fabric around his ankles. Or rather, the massive pile of don’t-care. He’s got this thing for pussy bow blouses, and honestly, we have no issue with it. But he hides them as much as possible by burying them under the loudest, worst-matched suits you could find, which makes us wonder what the point is. If you’re going to make gender non-conforming style choices, what are you saying when you make them as clownish as possible?

We could actually see this suit working, so long as the horrible hem job was corrected. But our point remains: it’s time for a style divorce, mister.