Home » Fashion » Style File: Allison Janney Always Does it Her...

Style File: Allison Janney Always Does it Her Way Full disclosure: we adore Miss Allison and always have. We have not, however, always adored her promotional style, except in the sense that she sticks very firmly to specific styles, regardless of how trendy they are at the moment. She’s far more focused on being stylish and being correct for herself (which is what good style truly is about) than she is about being “high impact” or trendy. That’s admirable. And if we were talking about personal style, we’d be 100 percent behind her in that regard.

But red carpet style, like it or not, rewards spotlight-grabbing far more than it does quiet, appropriate, consistency, which is why we occasionally find ourselves wishing she’d be a skosh more adventurous now and then.

Allison Janney attends the “I, Tonya” premiere during the 2017 Toronto International Film Festival in Toronto, Canada in Julea Domani by Zeena Zaki. 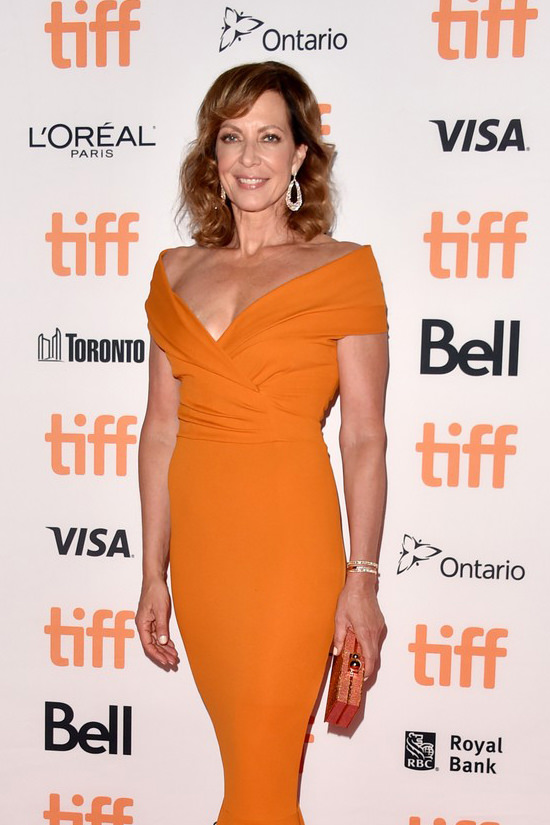 This is pretty great. We’re not entirely sure that orange is her best shade, although the lighting’s so poor it’s hard to tell. The shoes are lovely and the soft pink (which we normally don’t love) makes a nice counter to the orange. The design of the dress looks good on her, but it’s pretty close to generic. This is a good, solid, true-to-her, work-a-day look. It gets the job done.

And now for Party Allison: It’s a fun dress that looks really great on her, but that giant head of hair is making us very sad. It looks very wiggy and not particularly fresh, although we think she could look great with some big party blowout.

All silver accessories with a silver dress is … well, it’s one way you could go. It’s just not a very interesting one. Like we said, she doesn’t necessarily make bad style choices, but she fails to really maximize her looks and dress for the cameras. Both of these looks could be more dramatic and photogenic with some tweaks and rethinking.