To be honest, the after-party fashions for this year’s Emmy’s weren’t as interesting or notable as we’d have hoped; mainly because so many of the attendees didn’t bother changing after the ceremony. Damn them and their practical ways. Let’s judge the piddling remainders, yes? We could’ve put this in our regular Emmys coverage, but this was a better shot than any of his earlier red carpet pics. He looks great. We’re not convinced on the win. We’re totally convinced on the value of that lip warmer: it has none. Lose it, son. If it’s not grand enough to provide a wild ride (if you know what we mean), then what’s the point of it? Oof. She’s such a lovable kind of celeb, but she never gets the style part right. We suppose that might be part of the appeal. Anyway, this is too greige and too ruffled. It’s an easy gown to pull off, which is why we don’t understand the hair and makeup. Just a little bit more effort or oomph was required. Meh. He’s still cute, but this isn’t working. The shirt/tie/jacket color story is too close. And the brown shoes aren’t quite the right shade. And that’s kind of a goofy tie. Take it all off, James. Right this instant. 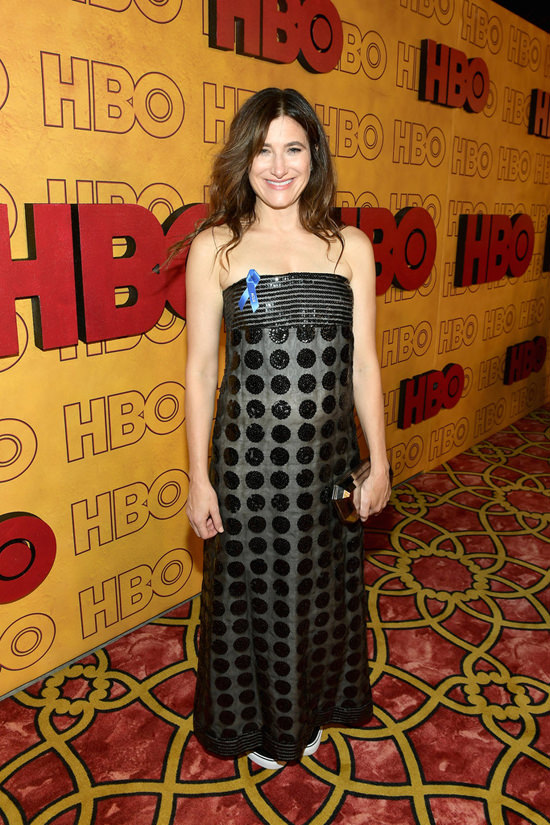 She rarely gets it right, but this looks pretty good on her. We’re assuming she switched into the Vans just for the after-party, in which case, brava. DAMN, girl. She looks fierce and we totally cop to missing the point by noting that we wish this was lined. Previous post:
“The Deuce” Star Maggie Gyllenhaal in Harper’s Bazaar’s October Issue Next Post:
The Men Who Put the “Man” in “Kingsman: The Golden Circle” at the Premiere