Time to wrap this rascal up, wouldn’t you say, darlings? We’ve still got a ton of pre- and post-Emmys party looks to get to, so don’t you worry your pretty little heads. We may be saying goodbye to the main event, but the Emmys will live on in our hearts forever. Or at least until we’re done wringing every post out of them that we can. Simple, elegant and understated. We’d have rec’d something with a bit more oomph, but we suspect that’s not her way at all. The straps are odd and the color really doesn’t flatter her. Plus it kind of shortens her waist. That’s too much illusion netting across the bust, but the rest of it is lovely. No arguments here, but he looks like he’s about to tip over. Fabulous color and neckline. She clearly prefers these lacy dresses with floaty sleeves, and while we remain unconvinced that they’re the best choice for her, this is probably the best one she’s ever worn. Not so sure about the pearl beading, though. Just stunning. And that color is nearly impossible to pull off. Boy, that’s not your hair. Too much forehead. Great from the neck down, though. This is going to sound incredibly back-handed and there’s no real way for us to avoid that (except keeping our mouths shut and you KNOW that’s not an option) but he makes “generic blond hunk” look hotter and more interesting than most men of that type. We really appreciate how quietly committed to impeccable style he’s become. He could be resting on pretty for the next decade but he’s putting the work in. Respect. Geez. We really want to, because we love her, but we can’t. This is just an okay dress at best. Absolutely perfect. And this is coming from two queens who hate garments that are too close to the wearer’s skin tone. But the soft neutral really works for the style and the trim (which is underplayed for a Miu Miu) bumps it up to princess-lite. She looks beautiful and sophisticated. And now she needs to mentor Millie Bobby Brown. They’re a really cute couple. We usually hate chokers, but she’s got the look for it. Something about the bangs make it work. The dress is a gorgeous color but we kind of want to move the shoulders up. He looks pretty much perfect. 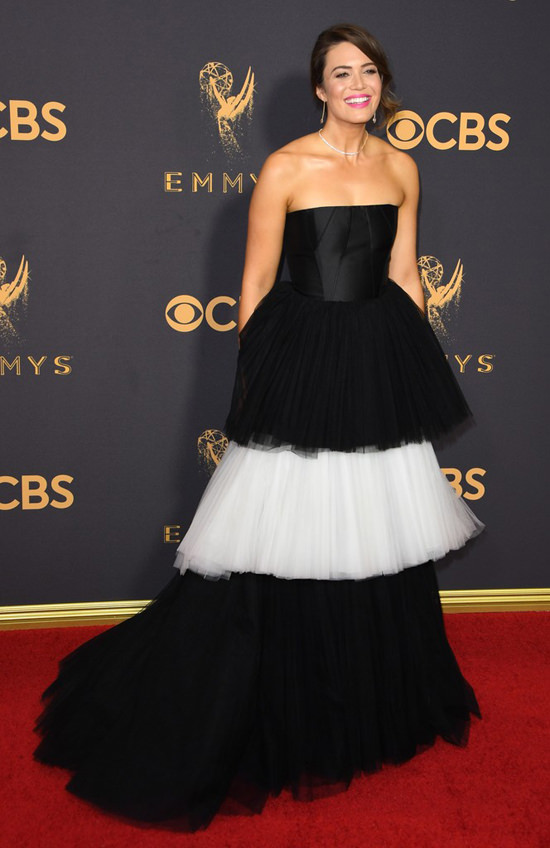 It’s a little too Dr. Seuss for us, but we respect her for finding a way to indulge her taste for style oddness while still looking appropriately chic for the occasion. DID ANYONE SEE HIS RED CARPET INTERVIEW WITH GIULIANA?  Because WOW. It’s a good thing he has a career where someone writes his words for him. And also that he’s pretty. That’s all we’ll say about that.

Style-wise, this all works fine. Love every single thing about this except … wait for it … the cutout. It doesn’t ruin the design, but like so many of them lately, it distracts from the better parts of it. And it turns her bust angular. 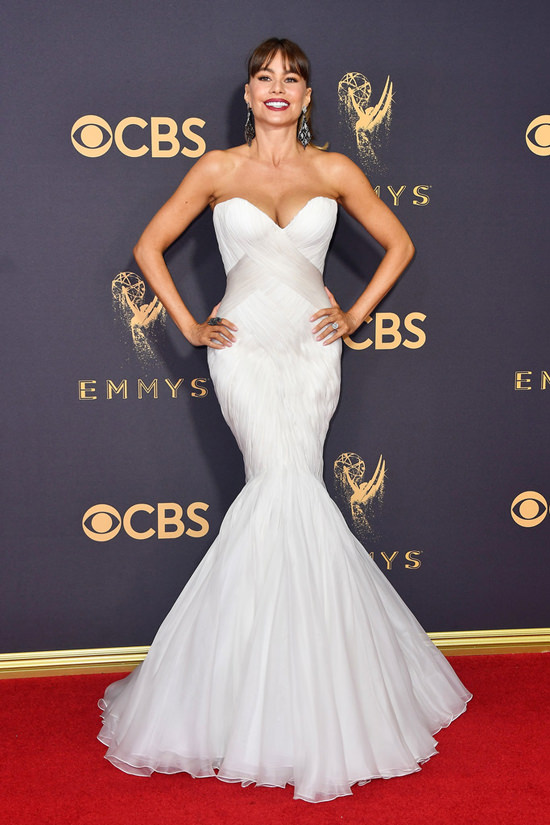 What a stunning couple. Another skin-toned dress that tends to work more than we would have expected. Once again, the sparkle really helps. Still, the placement of the sequins is a little weird. We don’t love this as much as we probably should, mainly because the one trend on the Emmys red carpet this year that we disliked the most was the overuse of feathers. This is pretty and dramatic, but it just happens to have come off a little like one in a line of looks using the same or similar elements.

Previous post:
Julianne Moore in Tom Ford at the “Kingsman: The Golden Circle” World Premiere: IN or OUT? Next Post:
Marc Jacobs Spring 2018 Collection