As Miss Z gets more confident and adventurous in her style, it’s clear she’s not feeling the need to stick to the tried-and-true ingenue style of pretty/sexy dresses and skirts. Of course it helps that two of the biggest RC trends of the summer are crazypants and pajamas. And this isn’tthe first time she’s shown a preference for either of them. But the first look is as cray as crazypants get and the second is as literal as the pajama trend can get. 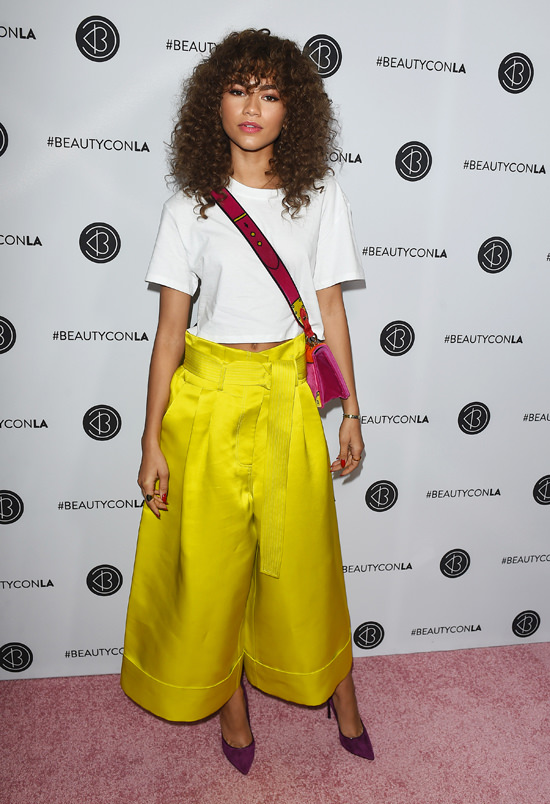 But we actually like the look. We just don’t like the color scheme. The bright yellow pants and aubergine pumps are asking a lot of the wearer when you’re already asking her to work a silhouette like that. The most boring and basic route to chicness for this look would be to keep everything the same except render the pants in black. But then it loses a lot of its impact. We’re just not convinced a shiny yellow crazypant is something she can work effortlessly. But let’s face it: who could? It’s literal, sure. But we’d argue once you render pajamas in sequins, you’ve stepped definitively away from sleepwear. We tend to like formal pajamas on the right wearer and in the right situation, but we know it’s not exactly a universal sentiment among fashion-watchers. To our eyes, this looks chic and well-styles. The hair and sandals really pull the look together in a soignée sort of way. Love it. Previous post:
Vanessa Hudgens Goes for the Bold at the Teen Choice Awards Next Post:
Tracee Ellis Ross in Chanel and Vetements at the Beautycon L.A.: IN or OUT?