Home » Fashion » Jared Leto Clowns it Up in Gucci on...

Jared Leto Clowns it Up in Gucci on “Extra” 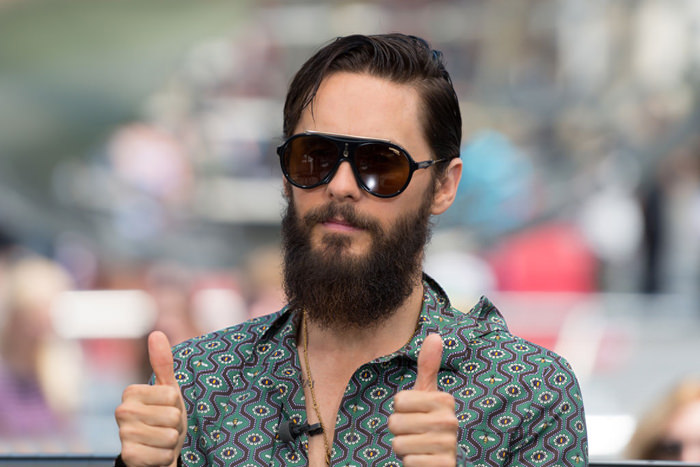 Mr. Extra himself visits the set of “Extra.” We’re really sighing – although we might just be melodramatic enough to actually sigh the word “sigh” out loud. We’re just trying to paint you a complete picture of our particular form of mild disapproval.

And now we’ll use words and not sound effects to do so: There was a time, right after his full-on embrace of Guccism, where we really loved our Rocker Pixie Jesus. His approach to style was fun, fabulous, and celebrated a long history of Euro-flavo(u)red Rocker Dandyism that stretches back a half-century. While it was pretty clear (to us, anyway) that he considered his various public looks more of a lark than a serious celebration of male style, we were always appreciative of his efforts, and the fact that he was so far outside the tiny box of conventional menswear. It’s good – and we would argue necessary – for a culture to celebrate its fops and dandies.

But now, he seems to be doing it so perfunctorily, and it’s seems so much more attention-seeking and clownish than it used to. We suspect many will say he’s always been this way, but to our eyes, he went from, say, playing characters with his public ensembles or having some sort of cheeky fun with them to this, which just smacks of “I’ll throw a bunch of crazy label stuff together.”

Believe it or not – and we don’t expect much agreement, but we’re firm on this – those pants deserve a better shot. Previous post:
“Game of Thrones” Season 7 Finale First Images Next Post:
Tyra Banks, Heidi Klum and Mel B Battle it Out at the “America’s Got Talent” Live Show