Home » Television » Freeform’s “The Bold Type” is Smart, Fun and...

Freeform’s “The Bold Type” is Smart, Fun and Stylish “What is this?” asked a cranky-from-the-heat Lorenzo when Tom queued up The Bold Type, FreeForm’s new series about three young women making their way at a Cosmo-like fashion magazine in New York. “It’s a thing,” Tom replied, in the manner of people who have lived together for decades. “There’s some minor buzz about it and I’m curious.”

“Ohmigod, I LOVE this,” gushed Lorenzo.

We realize you’re not supposed to make a critical review all about yourself, but this show is so charming that it managed to win us both over in seconds. That’s its major selling point, in fact. For all its highly familiar trappings, The Bold Type almost immediately sets itself apart by being unexpected; by shading the characters (who could all have easily been rendered in the broadest, most stereotypical strokes) and showing each of them to be both more and less than what you expected. This is quite possibly the highest praise we can think of for a show such as this: It avoids literally every single cliche – and it had the potential to be nothing but cliches. You take three thin, pretty, stylish 20-something women, plop them down in a New York composed almost entirely of gleaming fashion magazine offices, swank hotel rooftop parties, chic photographer’s studios and stunning penthouses, give them an imperious, powerful, take-no-shit older female editor-in-chief, and construct an entire show around their search for career, for meaning, for love, for money and occasionally for sex, and you’ve set yourself up for comparisons to everything from Friends to Sex and the City (and about 3 thousand lipstick-heels-and-cocktails-style imitators) to Girls and, most notably of all, to The Devil Wears Prada. And while it seems to us the people behind the show are well aware of its influences, they are also quite clearly well aware of the pitfalls of trying to imitate them. In some ways, The Bold Type isn’t just an homage to or extension of those previous looks at life in a highly fashionable New York City; its something of a response to them.

First, the three main characters are more nuanced than you’d expect. Sure, there’s the uptight one, the slightly more boho, open-minded one, and the sarcastic, sexy one. At first glance, you’d think you were looking at the types of archetypal versions of female characters one might expect from a SATC knockoff. Almost immediately, all three are shown to be more than they appear. Even better, all three (played by Katie Stevens, Aisha Dee and Meghann Fahy) feel like real versions of real young women in a real 2017. That’s not an unimportant detail. For all the potential for non-stop glossiness and high-melodrama storylines, for the most part, all three characters are facing the kinds of problems anyone would in their twenties; from what kind of career they want, to what kind of sex they like, to who they’re really living their lives for. The main characters manage to feel both fresh and lived-in, if that makes any sense. And they have great chemistry with each other. You believe the friendship immediately. Refreshingly, the fashion aspect of the show is extremely downplayed. Even though our introduction to the three mains is a somewhat eye-popping scene of them wearing gowns in a subway station and they all tend to have some fairly of-the-moment ensembles, you’re not hit in the face with it in a Devil Wears Prada kind of way.  One gets the sense, despite the proliferation of stiletto heels and rompers as office attire, that these people are actually working. Which brings us to the part of the show we loved the most. From everything we know about the world of high-ranking fashion magazines, a great deal of this show is amazingly on point and gives a very good portrayal of what it’s like to work in one. It does this by remembering that a fashion magazine is a journalistic enterprise and not some sort of office-based runway show.

And that’s why it works so well. The Devil Wears Prada was written by someone who hated working in that world and didn’t truly have any respect for it. The Bold Type is being executive-produced by Joanna Coles, the former EIC of Cosmopolitan. Subsequently, this isn’t a world of vipers and fashion bitches tottering around and stabbing each other in the back. It’s a world of writers and editors; photographers and social media managers. It’s a world of people who are smart, connected, and working their asses off to get product out the door to a massive audience. It’s a world that intersects with art, business and design – and all the major movers and thinkers in the world’s creative fields. Above all else, and quite refreshingly, The Bold Type has the highest respect for the people its portraying and the field they work in. 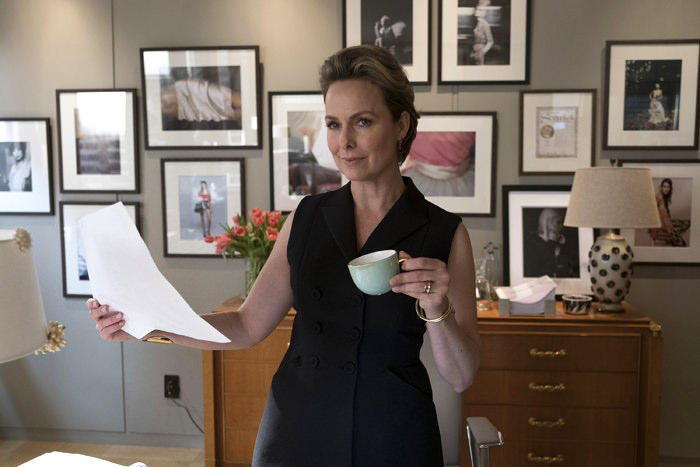 Case in point: Melora Hardin as the very Joanna Coles-like Jacqueline, EIC of Scarlet magazine. It would have been so easy to make this character a Miranda Priestley type; a fearsome figure in ridiculous ensembles who appears to hate any woman who crosses her path; especially if she’s younger. Instead, she’s a smart, savvy, well-connected editor of a massive operation, whose only motivation seems to be getting the best out of her staff at all times. In every scene with her writers, she pulled, pushed and prodded them into producing what sounded to our ears like much better, much more on point stories (literally every tweet and story pitch sounded completely 2017-authentic; another highly refreshing element). We’ve made this point before about high-ranking female EICs of fashion magazines: to portray them as shallow bitches is to reduce them to caricatures and flirt with chauvinism. Any EIC of a magazine with a circulation in the millions literally has to be insanely smart to keep her job. It’s not about matching scarves to purses, but running a massive, worldwide and extraordinarily influential media operation effectively. This show gets that. Instead of portraying it like the silly Mode magazine of Ugly Betty, the show makes Scarlet magazine actually sound like a fun and important place to work.

But what really sold us on this show was the clear and obvious way it prioritizes women’s voices, from the all-female pop music soundtrack, to scene after scene of women discussing their plans, their hopes, their fears, their faith, their desires and even their rage to each other. Given how respectful it is of the characters and how committed it is to portraying them with depth and nuance, The Bold Type is at the top of our list of TV show recommendations for young women.