Comic-Con 2017: The Women of “The Defenders” Cast Do the Heavy Lifting LOVING Miss Sigourney as a villain. She’s so good at playing them but doesn’t do it often enough, in our opinion. We have to admit that we lost interest in Luke Cage (because Mike Colter doesn’t have enough charisma to carry a series) and skipped out completely on Iron Fist (because we had little interest and the reviews were terrible), but we’re really looking forward to see this teamup. Admittedly, we’re most interested in the Jessica Jones and Daredevil parts because we liked their series, but still. It should be fun to see this world come together in the same way (but on a smaller scale) as the Marvel cinematic universe did with the Avengers films. Love your pink boots, Mike!  No time for the rest of those messes, cute though they are.

Ladies? It’s up to you once again. Cute dress. It could’ve maybe done better in richer colors, but she’s doing alright, if a little dressy for the occasion. 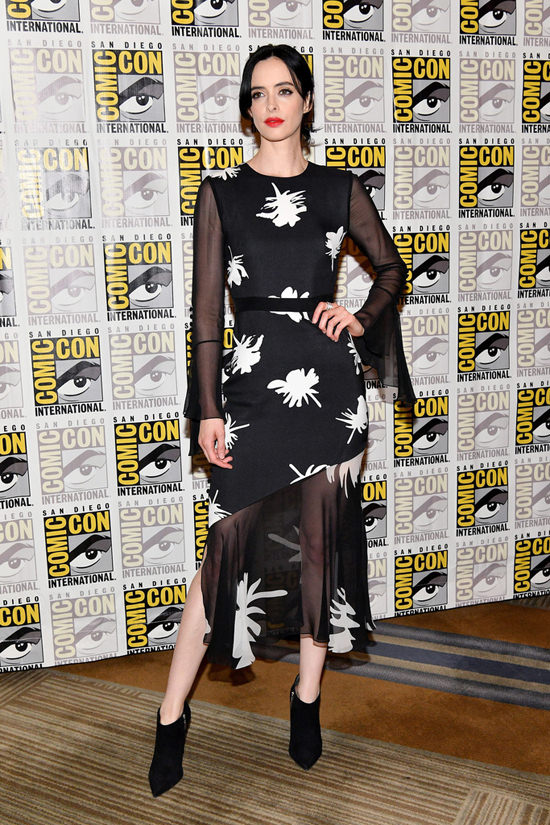 We don’t love the trickiness of the sheer parts nor do we think this was the time or the dress for booties, but she looks high-fashion without looking too try-hard. She’s making the most impact, which means she’s acing this one. We dig this the longer we look at it. She looks comfortable, but just stylish enough for the event and the pictures. Love the sandals.