Home » Fashion » The Scandalous Ladies of the “Scandal” 100th Episode... Oh, there was a scandal, alright. And it was happening all over this red carpet.

Fine, maybe we’re over-reacting, but darlings, when we saw the following series of questionable efforts, we, for our parts, were scandalized. That is a whole hell of a lot of dress. In fact, the overwhelming impression we get when we look at these shots is just how heavy that thing looks. We’re all for a gal taking a moment like this to grab a little spotlight time for herself, but this dress is awkward in its length and design, heavy and off-season for L.A. in April, and unflattering because it’s too tight across the stomach and it makes her shoulders and arms look bigger. It’s just way too much in every way. And the most annoying thing of all is that she defaulted to more or less naked sandals, which only serves to make the dress look even heavier by comparison. 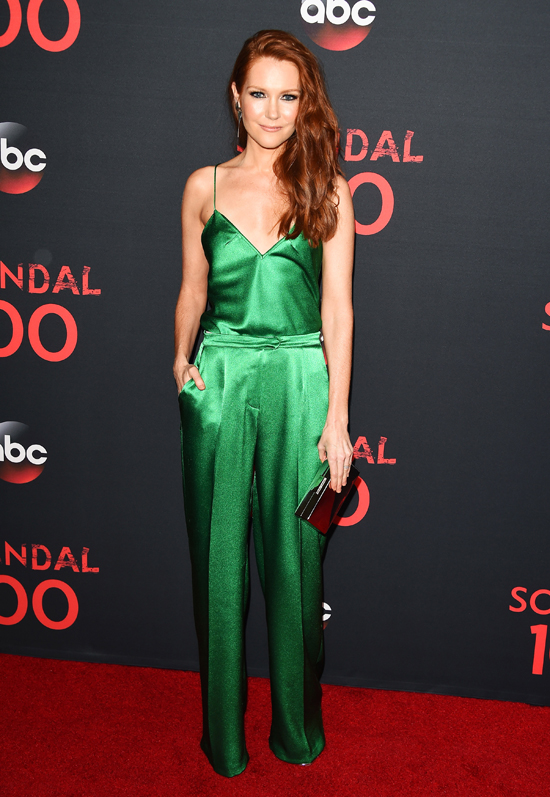 We gasped out loud when we saw this – and not in a good way. We would have thought it obvious that kelly green satin in a picture-taking (or any other sort of) situation is an automatic NO. When you use it to make a limp, pajama-like spaghetti-strapped jumpsuit, we would have thought it would graduate to HELL, NO status. Apparently, Darby thinks otherwise. Again, with the heavy-looking sweater-dress over naked shoes. What is that all about?

We don’t know… we suspect this dress will have its defenders, but to us, even if we could be convinced that it’s a decent dress (which would take a lot), it just doesn’t feel like something for a red carpet. It fits her nice enough, but it just looks like a pinafore over a heavy sweater, which doesn’t make much sense to us. It’s okay, we guess. It’s a dress we’ve seen puh-lenty of times before. Then again, an event like this really doesn’t need some crazily chic or fashion-forward look. This is fine, in theory. In practice, it’s weirdly tight in her bust.

Also: all of these ladies should sue someone for the horrible lighting on this red carpet.