“I have a confession to make,” Lorenzo said sheepishly at our early-morning, feline-heavy editorial meeting. “I don’t like slip dresses at all.”

We should probably stop here and explain that Lo had reasons for his utterance. It’s not like he just randomly blurts out his thoughts on dress styles. Here: In the end, we both took this opportunity to reveal our heretofore hidden and unexpressed thoughts on the slip dress. Turns out? Neither of us are big fans. As a garment inspired by another garment, the slip dress always struck us as way too literal. It’s a slip that’s been rebranded as a dress; not some sort of hybrid of the two. 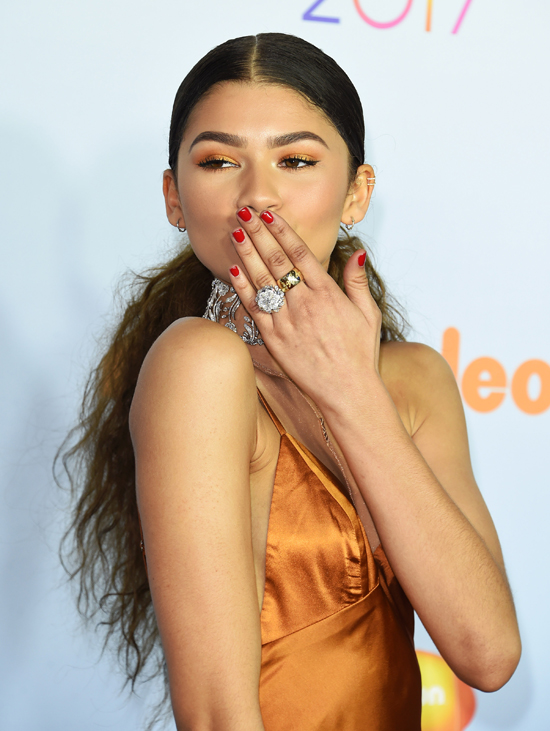 They tend to look really flimsy and wrinkly in photographs, which is why they tend to be rare visitors to the red carpet. Still, it’s not like it’s an impossible garment to work. Under the right circumstances, with the right styling and on the right woman, it can look breezy and sexy and romantic. Unforch, Z is not really hitting any of these marks and the reasons for that all come down to styling. Choices were made that we find completely befuddling. First, that massive bejeweled choker is so wrong for that flimsy little dress. She had the right idea with those delicate little chains, which work much better but are totally overwhelmed by that choker. Large, focus-pulling, highly structured formal pieces like that belong nowhere near a slip dress. The whole point to this style of dress is to basically look boudoir-ready at a moment’s notice. That heavy-ass thing works against it, both stylistically and thematically.

And if the jewelry choice confused and frustrated us … The footwear choice really confused the hell out of us. Who pairs heavy suede boots with a slip dress? What kind of sense does that make? It has such an odd effect overall. Five-pound jeweled collar, 3-ounce dress, ten-pound boots. Basically, this whole look was poorly conceived around a garment that isn’t all that hot a starting point.

At least the hair’s fab.

Previous post:
Who Won the Celebrity Style Sweepstakes This Week? Next Post:
Michael Fassbender Nips Things in the Bud at SXSW