Home » Fashion » Nicole Kidman Returns to the Path of Style... Oh, thank goodness. She’s course-corrected. After a month characterized by pale, colorless red carpetry, she’s back doing the one thing we constantly implore her to and almost never implore anyone else to do. And in order to bolster our oft-repeated point that she has a real knack for wearing it, we refer you to the past several pale and washed-out ensembles she’s sported recently, not one of which did as much for her as this relatively simple dress. Granted, it hasn’t been that long since she wore black or even tried out bold colors. It’s just that we’re always surprised to see her wander back to the tea-stained stuff when it never, ever looks as good on her. Anyway, this has more going for it than merely it’s color. It’s a nice design. The simple bodice and spaghetti straps are balanced with an exuberant, but not over-the-top skirt. The embroidery is not only really pretty, it has that rare quality among au courant embroidered dresses: subtlety. It’s not some over-embellished monstrosity with a bunch of naive shapes or random objects. Just a pretty, elegant, sophisticated pattern embroidered on a background that really sets it off.

There is one major problem with this look, though. 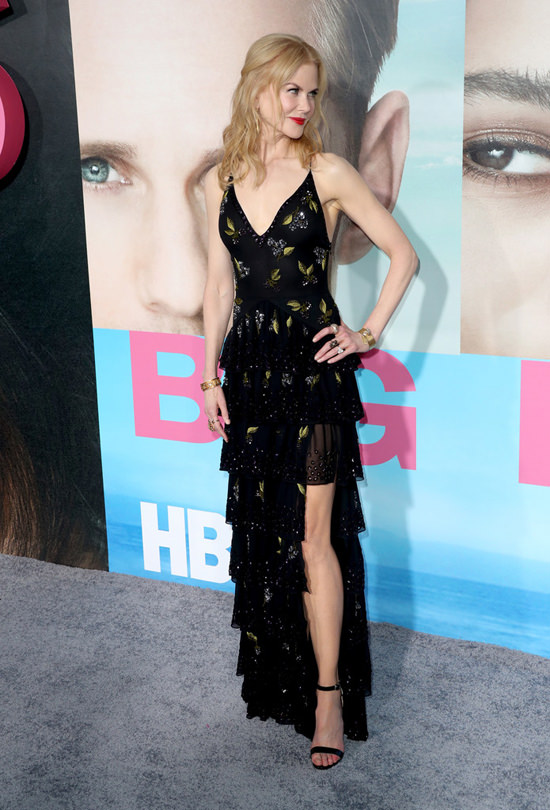 We don’t mind a slit – or even a thigh-high one – but this looks like it’s showing off her slip or something.  Minor quibble, though. It may just be one of the ruffles laying in an awkward position. We’d probably have rec’d a knee-high slit, except for one reason: It makes it look pretty cute from the back.

We just wish she’d worn the leather sash of the runway version, but she tends to like to accentuate her small waist as much as possible.