Are we ready, dolls? Let’s SHUT THIS ONE DOWN. We debated this one fiercely. Lorenzo was pretty much for all of it. Tom really likes it, but isn’t a hundred percent on the color or the “sleeve” treatment. It’s dramatic, though. And a more sophisticated take on the pink gown trend. Thie gal is amazing. How she manages to make Roland Mouret, of all designers, look so sloppy and haphazard is a real feat. This is so very not her dress. She needs much, much simpler fare than this. SHOCKED to find out this is Rodarte. We’re always saying they’re a terrible choice for the red carpet, but this is like the quintessential red carpet gown. Even better, it avoids being boring by having some slight interest and detail in the bodice. Also: she looks amazing in that shade of red. 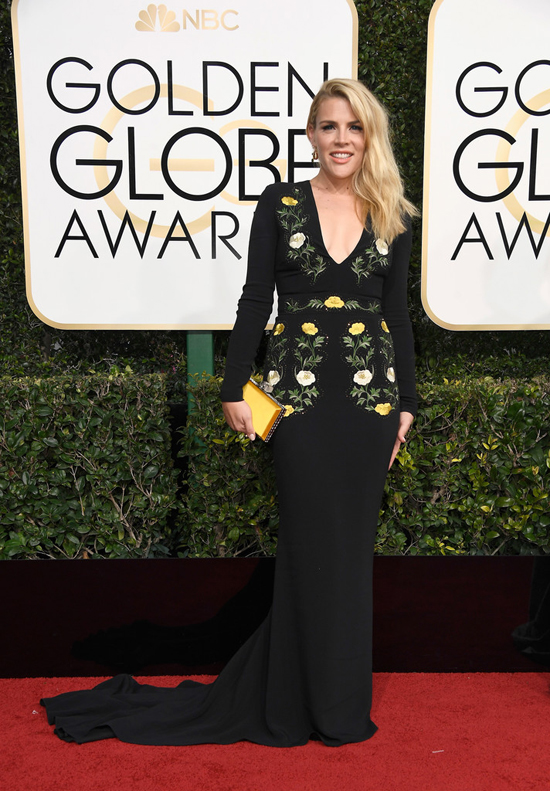 It’s … okay. Let’s just say it’s a little on the pageant-y side of things, making it a little far from our own tastes. MODEL ON THE RED CARPET. All others advised to stand down for the duration. You ain’t fighting this. Possible second-best white gown of the night? Reasonable people can disagree, but this is definitely up there. She looks FLAMAZING. Serve up that Hitchcock Ice Bitch realness, lady! It’s alright. A bit generic. And the shape is not all that great for her. We feel like Heidi is trying to communicate with us in the only way she knows how. Could someone please decipher her dress? We’re having a lot of trouble translating her boobs. It’s a pretty color, but that top isn’t all that great for her proportions. It seems like the look would be greatly improved if the top half was slightly more blouson in style. We really should have featured her on her own because this is clearly the UGLIEST gown of the 2017 Golden Globes. It’s a testament to how bland they are that we couldn’t even work up more than a dozen words on it.

But for real, that thing is amazingly hiddy. Despite our non-love of the wide plunging neckline, this look won us over. We really like the vague allusions to a tuxedo. It fits her perfectly and suits her to a T. Plus her head looks fabulous. Yeah, he clearly hasn’t bought a suit in at least 20 years (Hello, Friends-era 3-button jacket!) and she looks like sitting down is close to impossible for her at the moment, but we have too much built-up love. Pretty. Not setting the world on fire from a fashion perspective, but she looks great in this. He finally found a suit that fit him correctly. Nicely done. THIS is the gown Winona Ryder should’ve worn. Not that we can begrudge Signorina Monica for grabbing it. You know what? We’re gonna give her this one. Practically every other ingenue showed up in some take on a princess fantasy. Trust Elvis’ granddaughter to bring the crazy shit. It’s not pretty, but it’s as close to rebellious as you can get in couture at the Golden Globes.

Next up: AFTER-PARTIES. Also, pre-parties to catch up on. Lots of judging in the pipeline, darlings.