Christina Ricci in Boss at the “Z: The Beginning of Everything” Premiere: IN or OUT?

Christina Ricci attends the premiere of Amazon’s new series “Z: The Beginning of Everything” held at the SVA Theatre in New York City. We did not agree on the merits of this look! Can you guess who struggled to come up with nice things to say about it and who blurted out “Are you CRAZY?”

We’ll give you a moment to consider. You are correct! LORENZO defended this! Tom is on hold with a psychiatrist as we speak.

Or maybe Tom is completely out of line here and Lorenzo is the not-crazy one. You’re gonna have to be the tie-breaker, but the arguments break down as follows:

Lo: It’s interesting, I like the design of the skirt, the bold colors and the way it’s sliced up like that. I’m not so sure about the sheer part. And the top is kind of weird. But I like it.

T: I hate it. The skirt is ugly and the top is overdesigned. Plus it looks totally summer to me. I tried to find something I like about it, but I can’t. I hate it.

We reviewed the pilot episode last year. It has potential, but we can’t help thinking the title is fatally vague. 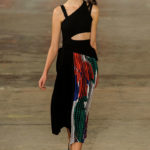 Style Credits:
Boss Dress with Cutout from the Spring 2017 Collection

Previous post:
Olga Kurylenko Wins the LBD Contest of the Day, Which is a Thing Now Next Post:
Maybe Salma Hayek Should Just Stick To Coats From Now On