Girls! There’s donuts in conference room A! Grab a cup, meet us there, and let’s continue to all be fabulous bitches together!

Ah. You’re scrolling down. That answers that question.

10. Beyonce in Gattinoni Couture at the Tidal X: 1015 Concert We know. We’re sorry. We probably should have issued a warning or something. But in all honesty, you’re in the top ten portion of a list running down the worst celebrity fashion choices of the year. You’re going to have to figure, from this point forward, there may be actual physical responses to the ugliness. Please consult a doctor to find out if T Lo is right for you.

Of all the heinous style trends of 2016, the rise of Barbie Crotch is the most disturbing; mainly because, unlike “forced whimsy” and black sheers, BC isn’t even close to being played out yet. It’s probably too early to call these things, but we predict that 2017 is going to be very crotchy. Brace yourselves.

9. Madonna in Givenchy Couture at the Met Gala We’re going to say something really blunt, as is our wont. There are a ton of reasons to respect Madonna – and they’re not all located decades in the past. She gets a lot of credit from us for refusing to stop being bold and controversial as she gets older. But the cynical side of us is compelled to point out that one of her greatest tricks in recent years was to convince some people that horribly bad style choices are somehow admirable if you make them over the age of fifty. Let’s get real here: Miley Cyrus would come in for a TON of criticism for going to the Met Gala in an outfit like this. Calling Madonna out for bad style choices isn’t automatically an ageist critique. This is just a straight-up hideous outfit, no matter who’s wearing it.

8. Jared Leto in Gucci at the Fashion Awards 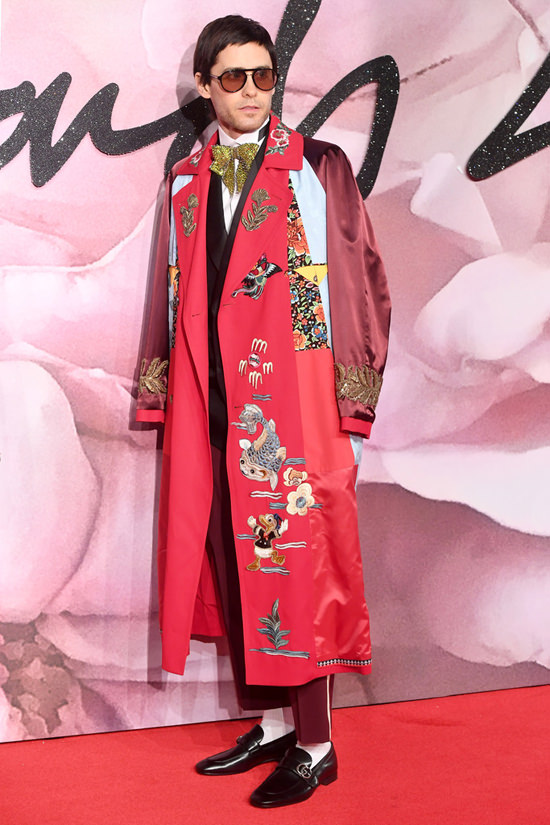 This was The Year for poor Jared Leto. And by that we mean the year that comes to all popular celebrities sooner or later. The year the public decides they’re no longer buying what he’s selling. It happened quickly, helped in no small part by his not-well-received turn as The Joker in Suicide Squad. But it pains us to admit that his goofy-ass red carpetry probably played a big role as well. A few years ago, he was doing an amazing job of blending his aging L.A. rocker persona with some rather stunning high fashion choices. Now? He’s Johnny Depp in couture.

Believe it or not, we think the coat could work. It’s literally every single other style choice that damns this look. Ah, yes. The other rising micro-trend in celebrity fashion this year: the “I was just attacked by wild dogs/industrial machinery/villagers with torches” dress, for which the house of Louis Vuitton is probably more responsible than any other for unleashing upon the world.

Like the Barbie Crotch, we feel this one’s not even close to peaking. For one, we suspect the current political climate is going to affect women’s fashion in a somewhat more … dystopian kind of way going forward. For another, there are just so damn many potential variants to this look, such as…

6. Scarlett Johansson in Atelier Versace at the “Ghost in the Shell” Trailer Launch The “I crawled from the flaming wreckage to get here” dress.