It’s bizarre how much the world of fashion has been intersecting with the 2016 presidential campaigns. We ran down some of the ways previously, such as Hillary’s white suit being a callback to suffragettes or how Ivanka Trump used her convention address time to sell a dress from her own line. But we were surprised to wake up this morning, not only to a ton of social media chatter about Melania Trump’s choice of blouse, but to a bunch of people linking our name to it. 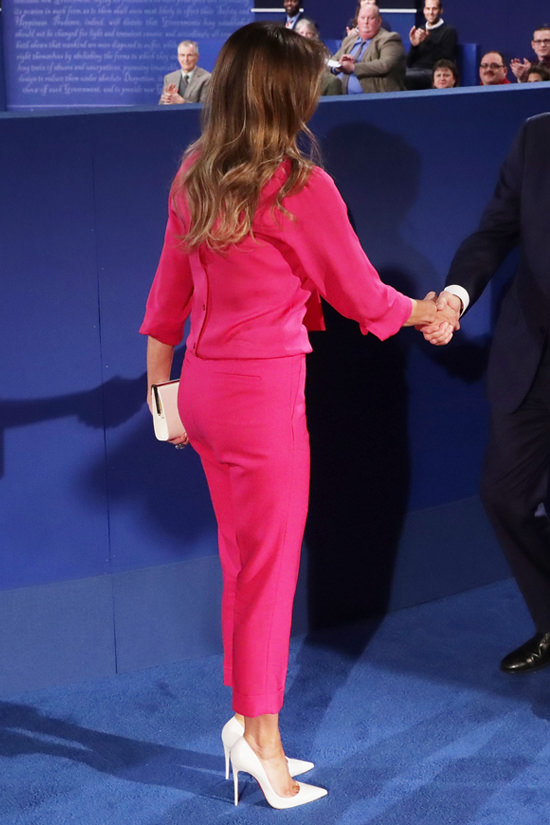 First, we’ll say that she looks pretty great. The pants are questionable, but the blouse looks good and she can work the overall look fairly well. This is highly unusual fashion for a potential FLOTUS to be wearing to a debate, but we’re not going out on a limb here when we say she’d be an unconventional First Lady.

Given the controversy surrounding the release last week of a tape with Donald Trump repeatedly saying the word “pussy” and talking about his penchant for “grabbing” them without the consent of said pussies’ rightful owners, many people latched onto the fact that Melania wore a pussy bow blouse to the debate and declared it a deliberate choice on her part.

We, for our parts, are torn on the issue. Lorenzo is absolutely convinced this was her and the campaign tweaking the nose (so to speak) of the public on the whole controversy. To his eye, it’s shameful and disrespectful and treats a serious offense like a joke. Tom says “Feh” to all that. He doesn’t think Melania has ever demonstrated an understanding of that kind of semiotic, message-sending approach to her style choices. Besides, going into the night, the very LAST thing the campaign would have wanted to do was treat the controversy – which has threatened to sink the campaign completely – as some sort of joke. Especially since, going by the reportage surrounding this choice, the majority of people out there had no idea that a pussy bow was even a thing.

Which is where our names came in. Because we’re cheeky little bastards, we have loved resurrecting the term (from its 1940s roots as the “pussycat bow”) and using it whenever appropriate over the last ten years of red carpet coverage. But what really must have cemented the connection between us and the pussy bow in the minds of some (and this is the only time in decades that either of us have been associated with anything pussy-related) is our work dissecting Janie Bryant’s costume design for Mad Men. Peggy Olsen in particular had a great love of pussy bows, although Joan tended to wear them quite often herself.

Anyway, to answer the questions posed to us this morning: No, we did not coin the term and Yes/No, she did/did not wear it on purpose.

A reminder that the internet is a vast and beautiful place, full of hangouts and sites where you are encouraged to yell at other people for having different political opinions than you. This is not and has never been one of them. Please go elsewhere if you want to debate politics.