Darlings, the long-awaited movie about trolls is finally opening and the stars all came out to awkwardly and reluctantly shine! 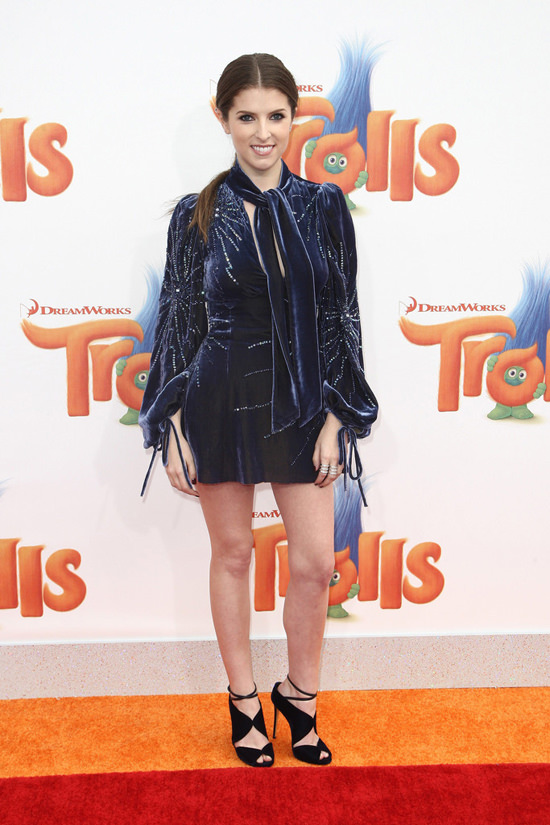 We want to like this. Truly. We realize that’s an odd thing to say because we’ve been ambivalent at best about her style and because this is so clearly meant for an ice dancing routine. But dammit, the girl’s trying.  No one involved with this film seems particularly enthused about it, but at least she’s taking an old-school Hollywood approach by going out there and selling it the best way she can.

But it’s still a pretty bad dress. Velvet we don’t mind. Velvet with bell sleeves and sparkles and an accompanying scarf? No, dear. No. It’s starting to look like a uniform with him. At least he didn’t wear a dumb little hat. If you told us this was a cardboard Zooey Deschanel photo figure, we’d have no reason to disbelieve you. It’s about as generically Zooey Deschanel as any look can get. Nothing is bad – the dress in particular is nice – but the look as a whole isn’t styled well and doesn’t photograph well.

Previous post:
Benedict Cumberbatch takes his cheekbones to BBC Radio One to promote “Doctor Strange” Next Post:
Wonder Women Lynda Carter and Gal Gadot team up at the United Nations