Anne Hathaway in Rodarte at the 2016 Toronto International Film Festival

Anne Hathaway attends the premiere of “Colossal” during the 2016 Toronto International Film Festival at Ryerson Theatre in Toronto, Canada.

This movie has been getting a ton of great buzz and because it sounds so over-the-top insane, it’s likely to receive a ton of press when it opens. So it seems to us like this would be a great opportunity for Miss Anne to take more control over her image, which took something of a beating after her Les Miz Oscar win. When she was poledancing for her Oscar, she had a fantastic run of red carpet looks that established her as one of the more stylish and adventurous ladystars in Hollywood, but after people started ragging on her for being too try-hard, she opted for years of much more low-key looks that tended to give the impression she no longer gave a shit.

Well, we’re back to give-a-shit Annie: 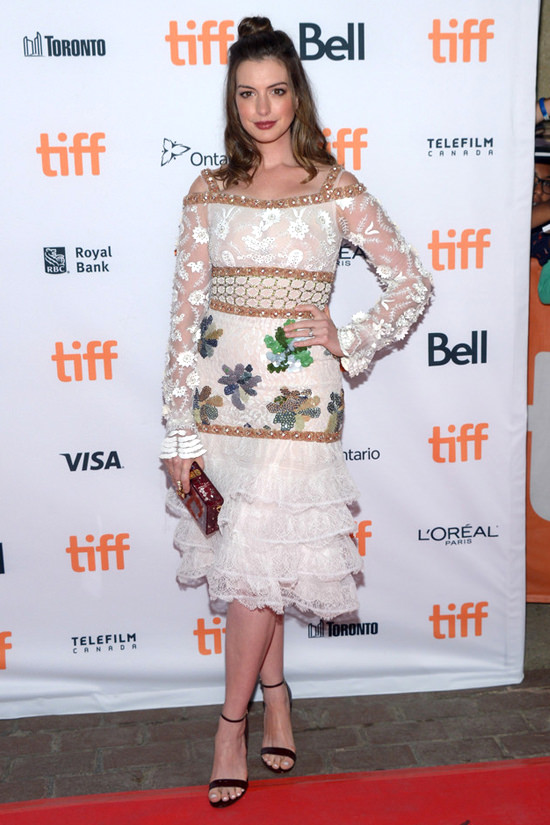 Okay, so this is a lot to take in. And we have no great love for the designs of Rodarte as they tend to be really awkward and weird without a lot of aesthetic value to them – to our eyes, at least. Long have we espoused the notion that celebu-ladies who don’t have great style cred should stay away from Rodarte designs. They simply don’t work all that well in a red carpet situation.

But this? We kind of love, to be honest. And if you think we’re nuts, consider this: it’s not a sheer black dress, none of her underwear is visible, and the embroidery and applique is cohesive and thematically tight, rather than the forced whimsy of putting random stars, butterflies and lipstick tubes on the dress. She has avoided every single 2016 red carpet cliche and she did it not by playing it safe but by being more adventurous than ever.

Which isn’t to say we love everything about this look. The bottom half of that skirt is pretty awful and the shoes don’t do a thing for the dress. We’re surprised, however, by how much we like the top knot. We suspect we’re not going to get a lot of agreement on this one – and we admit that it’s a somewhat awkward design – but it’s boldly different and head-turning. There’s something very declarative about it. We predict we’re going to see her in more of these types of looks as the film rolls out.