Home » Movies » Amanda Seyfried and Clive Owen on the Set...

Amanda Seyfried and Clive Owen on the Set of “Anon” Amanda Seyfried and Clive Owen spotted on the set of their upcoming sci-fi drama “Anon,” presently filming on location in the Financial District in NYC. “

“In “Anon,” Owen plays a detective in the psychological thriller set in a world with no privacy, ignorance or anonymity. All lives are transparent, traceable and recorded by the authorities. It’s the end of crime, it seems. However, when Owen’s character stumbles on a young woman (Seyfried) with no digital footprint and invisible to the police, he discovers it may not be the end of crime but the beginning.”

And now, another edition of “Pretty People in Wigs.” 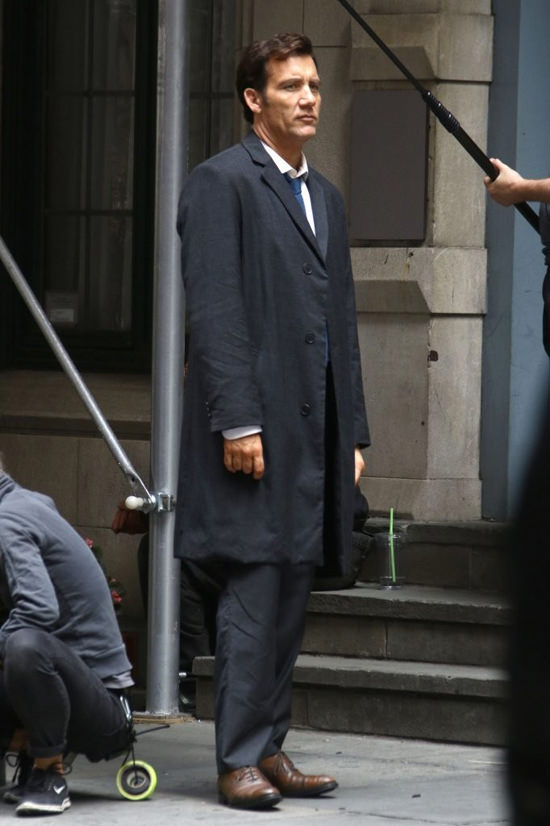 Everything about this movie, from the title to the concept to the costume design, seems basic to the point of dull. We suppose it could be argued that the concept practically demands a certain generic style, but such thinking would disrupt our attempts to judge something on a whim and without much information, and then the internet would probably implode or something. But this flick is being directed by Andrew Niccol, who helmed the equally as generic In Time, also starring Seyfriend along with an in-over-his-head Justin Timberlake. Given that our first reaction to these shots was how much they look just like the other film (without yet realizing they shared a director), we’re sticking with our initial unfair assessment until we see a trailer.

At any rate, here they are, being pretty and earning their mortgage money. We don’t have much to add except that Amanda loses a lot of what makes her interesting when you put her in a brunette Carol Brady wig.

We’re assuming Clive’s eyeball is really important to the plot or something.