Home » Fashion » Gisele Bündchen in Alexandre Herchcovitch at the Rio...

Tall and tan and young and lovely… 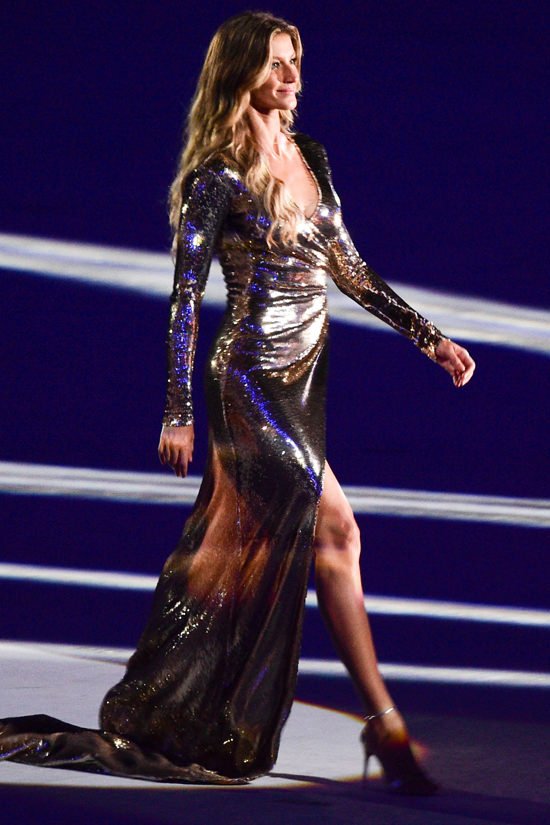 It’s ironic that a formerly nude sporting event now has a fashion component to it. We’re going to have a few things to say about the parade of nations during the opening ceremony and the utterly depressing designs of most of the team uniforms later today, but for now, a more pure fashion moment.

There was some eye-rolling over this bit – including on our couch – but ultimately, we came around to the idea. Brazil rather famously had to do these Olympics on the cheap and there was quite a bit of pre-chatter about how it was all going to be a disaster. But the organizers wisely focused on two basic things for the ceremony. The first was a salute to Brazil’s rich history and natural resources. The second was an affirmation that Brazilians are really hot and know how to party. No, really. That was mostly the focus. “Brazil is a beautiful country with a long, proud history – and we’ve got Gisele and Carnivale!” Kind of hard to argue with that.

The dress is fine. Herchcovitch is Brazil’s most famous designer, so it made sense for him to handle this. It’s not a high-fashion moment nor is it really meant to be. It’s just a shot of glam and sexy in the middle of a long night of pageantry.