Daniel Radcliffe makes an appearance on “Extra” to talk about his new movie “Imperium” at H&M Time Square in New York City.

This is a fantastic look for him – and a bit of a step forward, from a style perspective. 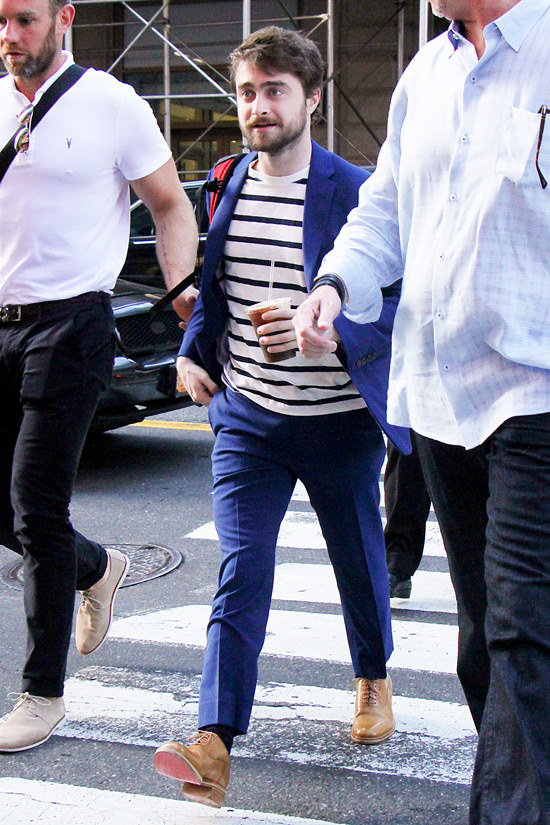 It’s youthful, but grown-up and sophisticated (which isn’t something you can always say about his casual style). The color looks great on him and we love the Breton stripe, which is both classic, and decidedly Euro in style. Love the platform shoes, too. If you’re gonna wear a heel, man up and just wear one instead of resorting to the embarrasing contraptions stars like Robert Downey, Jr. and Tom Cruise wear to enhance their height. If Prince could sport heels for 40 years, Harry Potter can damn well do it whenever he wants. Our only quibble is with the black or navy socks. Those aren’t quite the shoes for going sans socks (although he could have if he wanted to), so we’d rather suggest something lighter and more summer in tone for the sock.

That may be the greatest number of critical words we’ve ever written on the topic of someone’s socks.

Previous post:
Jessica Szohr in Diane von Furstenberg at the “War Dogs” Los Angeles Premiere Next Post:
Vanessa Hudgens Out and About in Beverly Hills