Darlings, no one loves a wacky hat more than the English. And no single event gives them a greater opportunity to showcase their wacky hats more than the Royal Ascot. Most of the attendees are fine wearing pretty or slightly cheeky headwear and the day provides many examples of chic, bold and eye-catching looks. But let’s face it, darlings. It’s the crazier stuff that gets the most attention. Flowers are a popular theme, of course. From bright little gardens… …t o pretty maids all in a row. The English love themselves a flower hat.

The English also love to take things way too far. 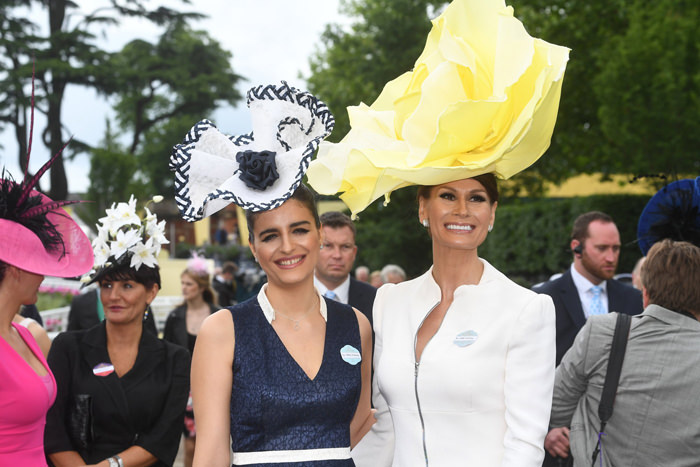 For some Brits, their flora needed to be huge. No, not just huge… Like, INTIMIDATINGLY huge. Like a bee the size of a cocker spaniel puppy is about to alight on her head.

For others, the goal was not to overwhelm with size… … but with sheer number.

That’s a little creepy, to be honest. We feel like someone should ask her if she needs help. After flowers, the most popular motif seems to bird plumage. Lots and lots of feathers. Sometimes the avian-inspired look was much more literal.

We would be much more impressed by this if there were streams of glittery fake bird poop in her hair. When you commit to a look, really COMMIT to it, y’know? Sometimes the feather hats got a little violent. It’s like an abstract bird is getting killed.

And speaking of abstract birds … Something without face or feature has landed on this woman’s head and it’s freaking us out a little. WHICH END DOES THE POOP COME OUT?

Then there were the royals, who know a thing or two about ostentatious headwear: Princess Anne: tasteful as ever. Princess Beatrice, available to do a little light dusting later, should the need arise. But in the end, the real fun is just watching the English indulge their love of eccentricity and self-expression. From the conventionally pretty headwear… To some sort of alien undersea life… To a neck injury waiting to happen.

Seriously, one errant bird could have her in traction for weeks.